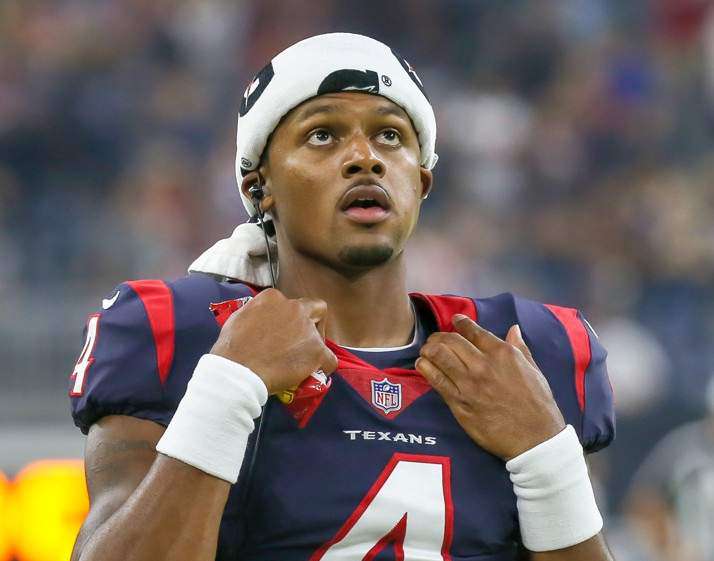 Welcome to my weekly “DomiNaters” article! I am taking the Week 5 breakouts from the quarterback, running back, wide receiver, and tight end positions and breaking down their performance. I will also look ahead to their matchups for the upcoming week to determine if they will “DomiNate” or “DetoNate” in your fantasy football lineups.

All stats are based on .5 PPR format.

Deshaun Watson had the best QB performance of the 2019 season. He took a teammate along with him for the ride but we will get to him later. Watson poured it on against the Falcons in Week 5, completing 28 of his 33 attempts for 426 yards and FIVE touchdowns! He added another 47 yards on the ground to cap off his perfect 158.33 passer rating. Watson has been off and on so far this season. Throwing for three or more TDs in Weeks 1, 3, and 5 but putting up goose eggs in Weeks 2 and 4. Watson’s rushing ability gives him a safe floor in fantasy as he rushed for a TD in the games he didn’t throw one. The lack of talent in this Texans backfield will force more value out of Watson which is good news for fantasy owners.

Week 6 ruling: Watson has a favorable matchup next week in what should be a shootout in Kansas City. The Chiefs have given up the 8th most fantasy points to the QB position this year. Look for Watson to DomiNate against the Chiefs and have himself his first great fantasy production game on an even-numbered week in Week 6!

Josh Jacobs was one of four RBs to rush for over 120 yards in Week 5. What makes this particular week more impressive is that he rushed for 123 yards against the Chicago Bears defense. If Jacobs can perform at that kind of level against one of the best defenses in the league then you’ve got to be happy to have him on your fantasy teams. Jacobs added two TDs and caught a few balls for 20 yards to complete his best performance of the year. Jacobs has had a pretty tough schedule to begin the season. His matchups do lighten up a bit moving forward. If you do not own Jacobs, now may be a good time to send an offer as he is on bye in Week 6.

Week 6 ruling: Unfortunately, Jacobs will not have a chance to continue his momentum in Week 6 as the Raiders are on bye. Pro tip: Do not leave Jacobs in your Week 6 lineups or he will DetoNate your chances of winning. You’re welcome.

Not only did Will Fuller put up the best WR performance in Week 5 but he had the best fantasy performance from any position on the season! Fuller exploded against the Falcons hauling in 14 of his 16 targets for 217 yards and THREE TDs! This type of game is why you draft someone like Fuller. He is capable of week winning performances like this. His floor can be iffy at times but as long as you surround him with safer options in your lineup, Fuller should never see the bench. It also helps to have DeAndre Hopkins on the opposite side of the field. Fuller’s 14 receptions tied Jamison Crowder’s Week 1 total to and both top all WRs for most receptions in 1 week.

Week 6 ruling: Fuller should have certainly earned more looks from Watson moving forward and has a decent matchup against a middle of the road defense vs WRs this season. He won’t be repeating his Week 5 performance any time soon but scoring multiple TDs against the Chiefs isn’t far fetched. Fuller will DomiNate in your lineups for a second week in a row!

Not a name most people are thinking about right now but Gerald Everett has quietly put together back to back productive games. Everett led all tight ends with 7 receptions in Week 5. He finished as the #2 TE on the week thanks to George Kittle squeaking by him by .7 fantasy points to take the #1 spot. Everett was the only TE to have over 100 receiving yards (136) and managed to finish the week as the #2 TE without scoring a TD. His targets have dramatically increased in the last two weeks (19 total targets) and I don’t anticipate them slowing down especially if Brandin Cooks misses time with his concussion.

Week 6 ruling: There has been a different #1 TE in all 5 weeks to start the 2019 season. It’s not an easy position to predict, however, Everett is trending up. He does have a difficult matchup in Week 6 against the 49ers defense but it honestly won’t take much for him to DomiNate as the tight end is one of the least productive positions in fantasy.

Which Week 4 breakouts are you ready to put your trust into? Let Nate know in the comments below.