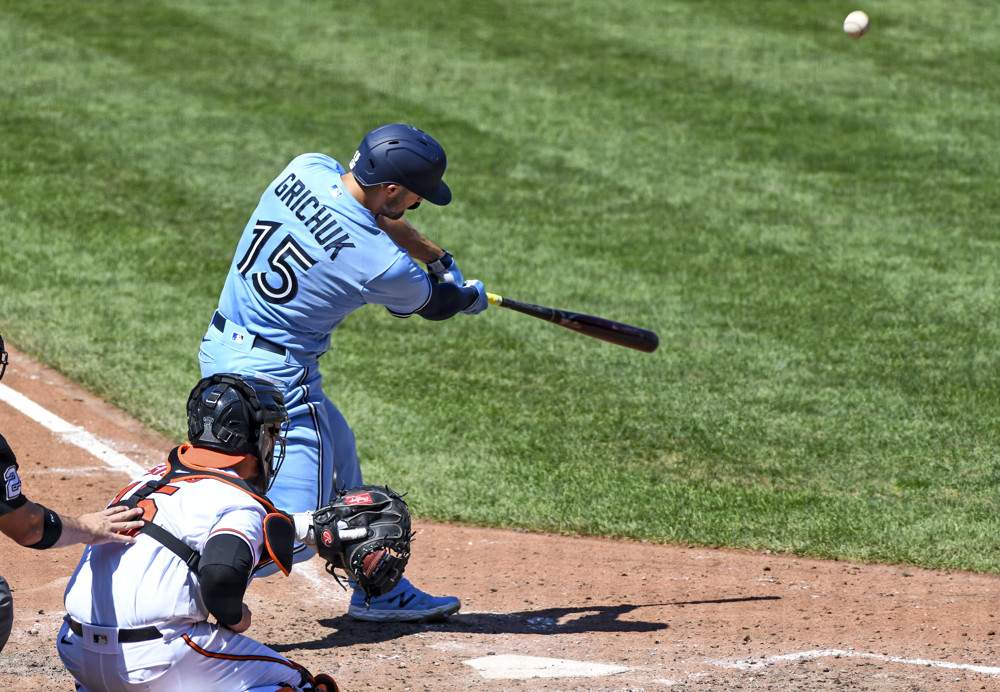 In week five, 20 teams protested games due to social injustice issues. Therefore, some teams play doubleheaders in week six. As always, we’re listing the teams with easier and tougher week 6 hitter matchups. Also, we’ll look at favorable hitter matchups for several players to plug into your lineup this week.

The Nationals and Pirates play eight games this week with a doubleheader each. However, the Pirates have the second-worst wRC+ (70) as a team, meaning their hitters have been awful. It’s mostly about volume with the Pirates this week. Fire up the Blue Jays hitters again, as they are ready to feast on their week 6 hitter matchups since the Red Sox rank dead last in wOBA allowed.

Phillies hitters have a sweet slate of hitter matchups playing against the Nationals and Mets that rank in the bottom twelve in ERA and wOBA allowed. The Mets face the Phillies, who rank as one of the worst pitching staffs in ERA (27th) and wOBA (29th) allowed.

Randal Grichuk ends up on this list again, and he continues to hit. Grichuk already smacked two home runs this week and should feast in these week 6 hitter matchups. On the season, Grichuk has nine home runs, 18 runs, and 23 RBI while slashing .311/.348/.613.

With the increased line drive rate at 28.2%, Grichuk’s Statcast data looks promising, with a 97.5 mph average exit velocity on FB/LD (No. 15). His expected stats are all in the top 25th percentile of the league with a .308 xBA, .581 xSLG, and .388 xwOBA. Amongst qualified outfielders, Grichuk ranks 15th with a 152 wRC+. Continue to start Grichuk with confidence, and trust the changes to his batted ball and Statcast data.

Similar to Grichuk, Teoscar Hernandez shows up here again with the increased line drive rate (28.9%) in his batted ball profile. Since last week, the walk rate has increased, and the strikeout rate decreased while hitting another home run. He ranks 5th with a 98.7 mph average exit velocity on FB/LD sandwiched between Corey Seager and Matt Chapman. I recommended Hernandez as an underrated hitter coming into the season, and love to see the batted ball data backing up the hot start.

With the news about Aaron Judge heading back to the injured list due to a calf injury, Clint Frazier should receive everyday at-bats in the Yankees lineup. Although it’s a small sample, Frazier has been smoking hot with four doubles, three home runs, 11 RBI while slashing .314/.415/.686. Before the shortened season, I noticed Frazier adjusted his swing to have a more closed stance. With the swing change and batted ball data, Frazier may finally be taking off with a 92.6 mph average exit velocity and a 56% hard-hit rate. Add Frazier where available and plug him into your lineup with eight games in his week 6 hitter matchups.

If Andrew McCutchen is hanging around on waivers in shallower leagues, then he is worth an add with the recent hot stretch. McCutchen recorded a hit in 15 out of the last 20 games with eight multi-hit games. During that stretch, he totaled three home runs, ten runs, 18 RBI, and three steals. Due to the slow start, McCutchen’s Statcast data does not look great, with a 90.9 mph average exit velocity on FB/LD (No. 194). With the easier week 6 hitter matchups and McCutchen heating up, plug him into your lineup this week.

Rookie Alec Bohm has been playing well since his call up with one home run, six runs, and six RBI while slashing .289/.385/.422. Bohm typically displays a high OBP and better in OBP leagues, but his Statcast data backs up the hot start with a 92.4 mph average exit velocity and 57.1% hard-hit rate. Similar to McCutchen, Phillies hitters like Bohm should feast with their week 6 hitter matchups.

More of a deeper league play, but Rowdy Tellez smacked a couple of home runs against the Red Sox on Wednesday. So far in August, Tellez has three doubles, five home runs, 10 runs, and 13 RBI while slashing .264/.316/.604, and a 163 wRC+. He faces right-handed pitchers more often, with about 75% of his plate appearances coming against righties. Tellez hit all six of his home runs against right-handed pitchers but has a higher batting average (.294) in 18 plate appearances.

Notably, he is striking out less with a 15.4% strikeout rate that’s down from his 26.6% career average. He’s also making more contact in the zone and overall with an 89.7 mph average exit velocity (50th percentile) and a 45% hard-hit rate (68th percentile). In deeper leagues with daily moves, he’s a sleeper with his week 6 hitter matchups.

Let’s try this again with Luis Garcia. Last week Garcia logged three hits, one double, one RBI, and one steal with a .231 batting average. The Nationals have hitter-friendly matchups in week 6, and Garcia is a sleeper hitter once again. He’s more of a deep league player since the batted ball profile and Statcast data appear slightly concerning. Garcia has a 63.6% ground ball rate, 82.7 mph average exit velocity, and -7.6 launch angle. We like the 27.3% line drive rate, but hopefully, he replaces the ground balls for fly balls or line drives and comes through as a deep sleeper this week.

Luis Garcia (#3 #Nationals prospect) had a 3-hit game yesterday.@JasonKamlowsky’s take:
Showing exactly why I thought he would be the next teenager to make an impact in DC. The hit tool has shown up earlier than expected & he’s going to fill a huge need.#Natitude #PLive pic.twitter.com/cLNXx9ND3l

If you need batting average, then Kevin Newman is your guy. In August, Newman has three doubles, one home run, and five RBI while slashing .323/.353/.415. Over the last 14 days, the Pirates as a team ranked second to last with a 63 wRC+. Newman displays a quality 25.4% line drive rate and a low 11.5% strikeout rate (97th percentile). Be cautious with Newman and the limited counting stats. However, he’s worth an add in deeper leagues if you need help with batting average in the week 6 hitter matchups.