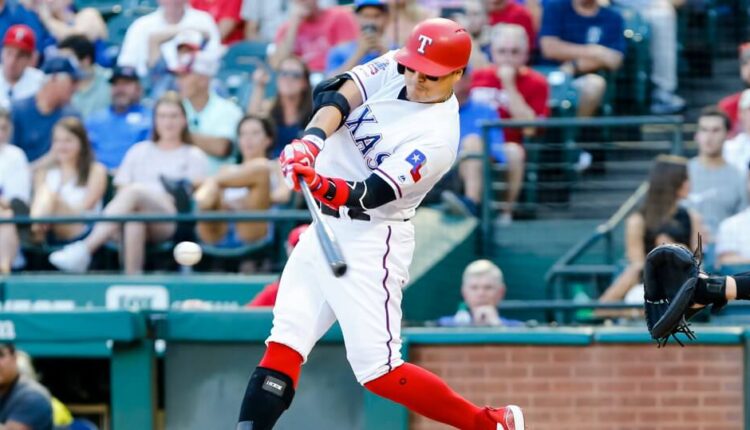 With the shortened season, we’re going to take a look at five underrated hitters for the re-start of a season we’re hoping to see. These hitters have a Fantrax ADP past pick 200. A few of these players are veterans with great on-base skills. One player’s under the radar on his own team due to the young talent around him. This same player appears risky, but the risk is minimal where he’s being drafted.

In a shortened season players projected for the most at-bats and batting at the top of the lineup will be valuable. These under the radar players are not getting the love they deserve and may be labeled as boring. However, I find these players valuable even if other teams in your league won’t be trading for them. Let’s take a look at five underrated hitters for the 2020 shortened fantasy baseball season.

Longtime veteran and one of baseball’s perennial underrated hitters, Shin-Soo Choo currently has a 222 Fantrax ADP. At 38 years old, Choo will continue to bat leadoff for the Texas Rangers. When looking at Choo’s career, he’s the definition of consistency. Over the last three seasons, he’s averaged 22 home runs and 11 steals. Since he bats leadoff he accumulated tons of runs with lower RBI totals, but he’s got top notch on-base skills.

Choo’s under the radar partially because he’s old and not super exciting. He does struggle a bit against lefties and most of his at-bats were against righties. With the regional schedule, I found 18 total left-handed starters in the AL and NL West divisions according to Roster Resource. Each team will play 40 of the 60 games against AL West opponents. In the AL West there are eight lefty starters, but it’s to be determined when/how these southpaw starters will be used in the shortened season.

On Fangraphs, Steamer and Depth Charts have updated their projections. According to Steamer projections, Choo’s projected for eight home runs, 32 runs, 23 RBI, and three stolen bases with a .256 batting average. In a shortened season, Choo’s a player I like targeting with great on-base skills and a proven track record.

Check out the rest of our fantasy baseball content. We’re working to update all the information you need to succeed in upcoming drafts!

Last year, McCutchen’s walk rate jumped up 2.5% to 16.4% and the strikeout remained the same at 21%. He had a 90.6 mph average exit velocity with a 93.3 mph average exit velocity on FB/LD, and a 40.9% hard-hit rate. His hard-hit rate tied him with his teammate J.T. Realmuto. It’s important to note that he didn’t qualify for many batted ball events in 2019 due to the season-ending injury.

Oddly enough the shortened season will be 60 games, so his 2019 numbers could be similar to the shortened season assuming full health. The Steamer and Depth Charts projection systems project him to hit 10 home runs, 31 runs, 25-27 RBI, and three stolen bases with around a .260 batting average. He’ll receive a ton of at-bats and score a bunch of runs at the top of a good Phillies lineup, which will be especially valuable in a shortened season. Even if the Phillies wanted to give him a day off in the field, he could be the designated hitter. McCutchen’s 250 Fantrax ADP makes him the 58th outfielder drafted, and a great third or fourth outfielder. With outfield being a deep position, I’m fine waiting to grab Choo or McCutchen in this range.

When we think of the Blue Jays, we think about their youth in Cavan Biggio, Bo Bichette, and Vlad Guerrero Jr. However, there’s an outfielder that will play everyday named Teoscar Hernandez. We know there’s power, but he struggles a bit in the batting average department. The last two seasons he’s played almost a full season and averaged 24 home runs, 62 runs, 61 RBI, and five stolen bases. His batting average hovered in the .230 range with an OBP in the low .300 range, and that’s not appealing. On the other hand, his Statcast data backs up his raw power.

At pick 303, there’s less risk with drafting Hernandez as a 5th outfielder or late-round power bat. He does have reverse splits, and mashed against righties with 18 of his 26 home runs coming against right-handed pitchers. A few of the divisional ballparks play well for right-handed power according to Max Freeze’s Directional Home Run Park Factor article. Steamer’s projections on Fangraphs have Hernandez hitting nine home runs, 22 runs, 25 RBI, and three stolen bases with around a .230 batting average. Those projections are near his teammate, Randal Grichuk, and Hernandez’s going about 50 picks later. Hernandez would be a great player to pair with the safe floor of Choo or McCutcheon.

Jonathan Schoop’s team context isn’t that great being on the Tigers, but he’ll be the everyday second baseman. Schoop’s surface statistics were oddly similar the last two seasons. Last year he hit 21 home runs, 61 runs, 59 RBI, and one stolen base with a .256 batting average. He’s projected to bat 5th for the Tigers behind C.J. Cron, so the at-bats and counting stats will be there even if it’s a weaker offense as a whole.

When looking at his Statcast data, there’s not a ton that jumps off the page. However, he’s still hit for power and counting stats even with below average Statcast data. With the Orioles in 2016, 2017, and part of 2018, the home ballpark and batting higher in the lineup helped boost his production. Schoop still produced with the Twins last year, but often batted in the bottom third of the lineup. Schoop’s 38% hard hit rate ranked in the 47th percentile and 93.5 mph average exit velocity on FB/LD tied him with Carlos Santana, Ketel Marte, and Anthony Rendon. When we look at maximum exit velocity, Schoop ranked 27th right behind Franmil Reyes, so the raw power’s there. Here’s a look at Schoop’s raw power.

Jonathan Schoop launches the longest HR by a @Twins player since 2017. pic.twitter.com/cg9edzOWXT

Schoop’s 310 Fantrax ADP makes him the 24th second baseman and 47th middle infielder drafted. He’s a great target as a middle infielder or bench bat since he’ll play every day and hit in the middle of the Tigers lineup. At this point in the draft, there’s little risk with Choo like production without the steals and runs scored.

The reigning NLCS MVP, Howie Kendrick, had a great year in 2019 and seems to be one of this year’s most underrated hitters despite that success.. In 120 games, he ended with 17 home runs, 61 runs, 62 RBI, and two stolen bases while slashing .344/.395/.572. Kendrick’s Statcast page showed that his batted ball data backed up his amazing 2019. Let’s take a look at his batted ball data.

He had a 92.6 mph average exit velocity (92nd percentile) and 48.3% hard-hit rate (94th percentile), and both were career highs. His 94.4 mph average exit velocity on FB/LD ranked 73rd, which was tied with Edwin Encarnacion and Max Muncy. Kendrick’s slated to platoon with Eric Thames at first base for the Nationals, but should get almost full playing time with the universal DH. It’s hard to imagine the Nationals keeping Kendrick’s bat out of the lineup in favor of another veteran Ryan Zimmerman. Kendrick’s expected stats were all in the top 4% of the league last year with a .335 xBA, .522 xSLG, and .461 xwOBAcon. We love seeing a player’s Statcast data back up his surface stats.

Steamer and Depth Charts on Fangraphs project him to play between 29-40 games with four to five home runs and slight variations in runs scored. There’s a safe batting average floor hovering around .300 and we know there’s legitimate power. His 334 ADP makes him such a great value at the end of drafts. The first base and second base positional eligibility also help with roster flexibility.

Hitter Strategy in a Shortened Season

My hitter strategy with a shortened 2020 season will be to wait on shortstop and outfield because there’s so much depth at the position. Positions I like to target earlier are first base, second base, and third base. This list of under the radar hitters are mostly boring and consistent veterans with great draft value at their ADP. When you look at the updated projection systems, there’s little separation between the player projections. Therefore find a strategy that works for you and be ready to adjust throughout the season.

Who are your favorite underrated hitters for 2020? Let us know in the comments below. We promise to keep quiet about them!