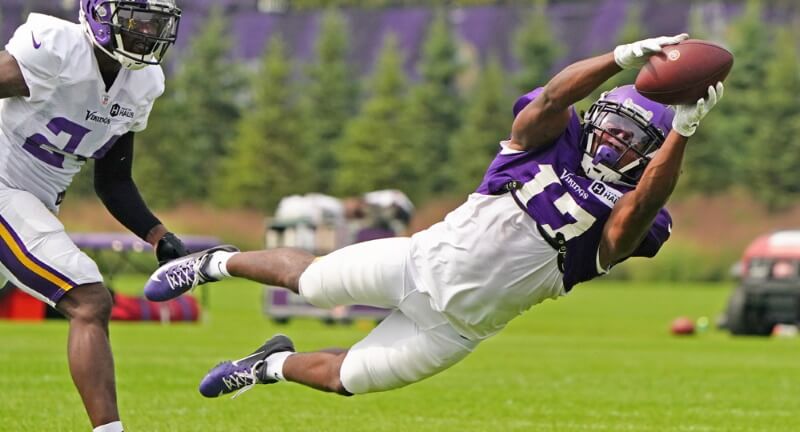 The waiver wire has come and gone. You’ve spent your FAAB dollars. It’s time to dig deep and look at the matchups to decide how to construct your starting lineups for NFL Week 2 of the fantasy football season. We’ve got you covered, friends. Let’s get into the top Week 3 sleepers and streamers!

A very smart and handsome fantasy contributor told you before the season started that Jefferson wasn’t going to exceed his ADP in fantasy production this year, as defenses would be keying in on him, and he’d get every team’s number one corner. That’s played out thus far. Kirk Cousins has still kept his gun-slinging wits about him though, which is great for the 2nd and 3rd receivers on this roster (Adam Thielen and K.J. Osborn). K.J. has 167 yards through two games, 12 receptions on 15 targets, and 1TD. As they face a Seattle defense that has let teams throw all over them, and combine it with the fact the Vikings are going to need to score to keep up with the Seattle offense, K.J. Osborn makes for an excellent play this week.

This offense is running rather well under new starting QB Taylor Heinicke, thus far. His rushing ability caps some upside on Antonio Gibson and has forced the team into more snaps and play scripts where J.D. McKissic, the team’s designated backfield receiver, is needed. Antonio Gibson ranks 18th in snap share with 63%, while McKissic isn’t that much further behind with 40%. If you’re in a PPR league, McKissic can scratch your starting lineup if you’re in need. He’ll be looking to build upon his 9 touches, 93 total yards, and 1TD last week. Keep an eye on him, he becomes a must-start if Antonio Gibson has a setback with his shoulder.

A guy who many would consider the most exciting WR in the game just a few years ago has cracked into the fantasy sleeper realm. Time can be humbling. The fact of the matter is, even if OBJ isn’t his usual self…if he’s still hobbled…if he’s lost a step…if he’s more of a name brand, than a football player. Whatever it is you think about him, it doesn’t matter. Baker Mayfield is going to throw the ball. He’s going to throw it a lot, in fact. With Jarvis Landry going down, OBJ becomes both the possession receiver and big-play threat (much like his NYG days). He’s going to get volume this week, and opportunity is the name of the game. Expect 10+ targets this week. I’m not worried about snap share coming back from injury. If he wasn’t ready, he wouldn’t play.