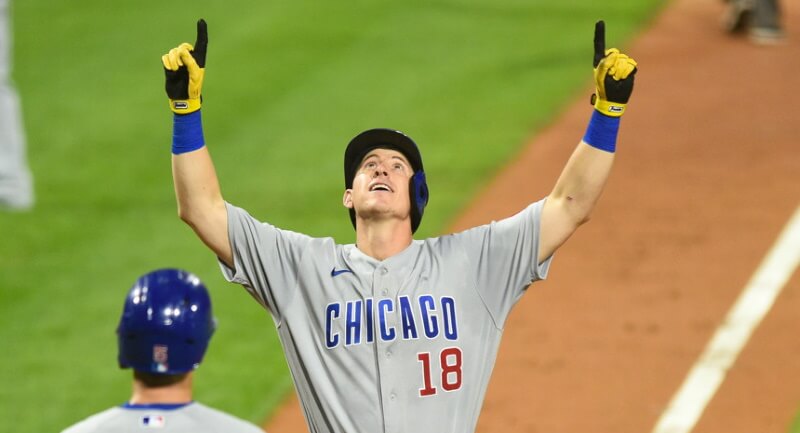 As we wind down to the final week and a half of the season, we’ll touch on a couple of players to buy or sell in this installment of our series. Should we analyze another Cubs player after last week’s discussion of Ian Happ? Why yes, we do. The waiver wire stud in Frank Schwindel keeps popping up and swinging a hot bat. Then we have a Cleveland pitcher that held some sleeper status and provided a dominant stretch from a quality start and ratio standpoint. Let’s finish the season strong and do some early preparation for 2022 with our buy or sell series.

There’s nothing like a waiver wire player turning into a must-start player. It’s even better when it’s a 29-year-old hitter with his second MLB stint in 2021. However, Frank Schwindel’s debut included a 15 plate appearance sample in 2019, so it’s the first real shot at regular playing time. Since August 12, when Schwindel moved into the two-hole, he’s on fire with 12 home runs, 30 runs, 31 RBIs, and one stolen base. Schwindel also boasts a .368 batting average, a 1.125 OPS, and 193 weighted runs created plus (wRC+). That’s just silly.

With the Cubs offloading several of their core players, Frank Schwindel moved into regular playing time and must-start fantasy status. A reason to dig into Schwindel’s profile for this week’s buy or sell installment involves figuring out whether we should consider him as a draft target in 2022. There’s a good chance that Schwindel will hold down the first base spot next season, given the late-season success and lack of other quality options.

Throughout Frank Schwindel’s minor league and MLB profile, he boasted fly ball and ground ball rates above or around 40%. That said, Schwindel’s line drive rate typically hovered below 20%, and it sits at 19.4% in 2021. Schwindel’s 41.3% pull rate and 41.3% fly-ball percentage fit the power hitter profile.

Schwindel uses a contact-oriented approach with a 92.3% Z-Contact% and 77.2% Contact%. Interestingly, Schwindel boasts an aggressive approach at the plate with a 38.7% O-Swing% and a 52.2% Swing% overall. It’s interesting because he hardly strikes out with a 16.7% strikeout rate and a quality .383 OBP in a relatively small sample of 212 plate appearances. An aggressive approach can work assuming the contact rates remain high or above the league average.

Oddly, both Frank Schwindel and Kyle Schwarber share the first four letters in their last names. However, Schwarber easily crushes Schwindel in the hard-hit metrics across the board. Schwindel’s season-long 8.8% barrel rate sits right below his 9.1% barrel rate since moving to the two-hole.

Granted, it’s a small sample, but Frank Schwindel appears to crush fastballs and breaking pitches with some struggles against offspeed stuff. Particularly with fastballs, Schwindel boasts a .355 BA, .748 SLG, and .475 wOBA. With a larger sample, it’s safe to expect some regression, especially the ridiculous slugging percentage. Even Schwindel’s .338 BA, .515 SLG, and .376 wOBA show that he possesses the ability to hit non-fastballs. 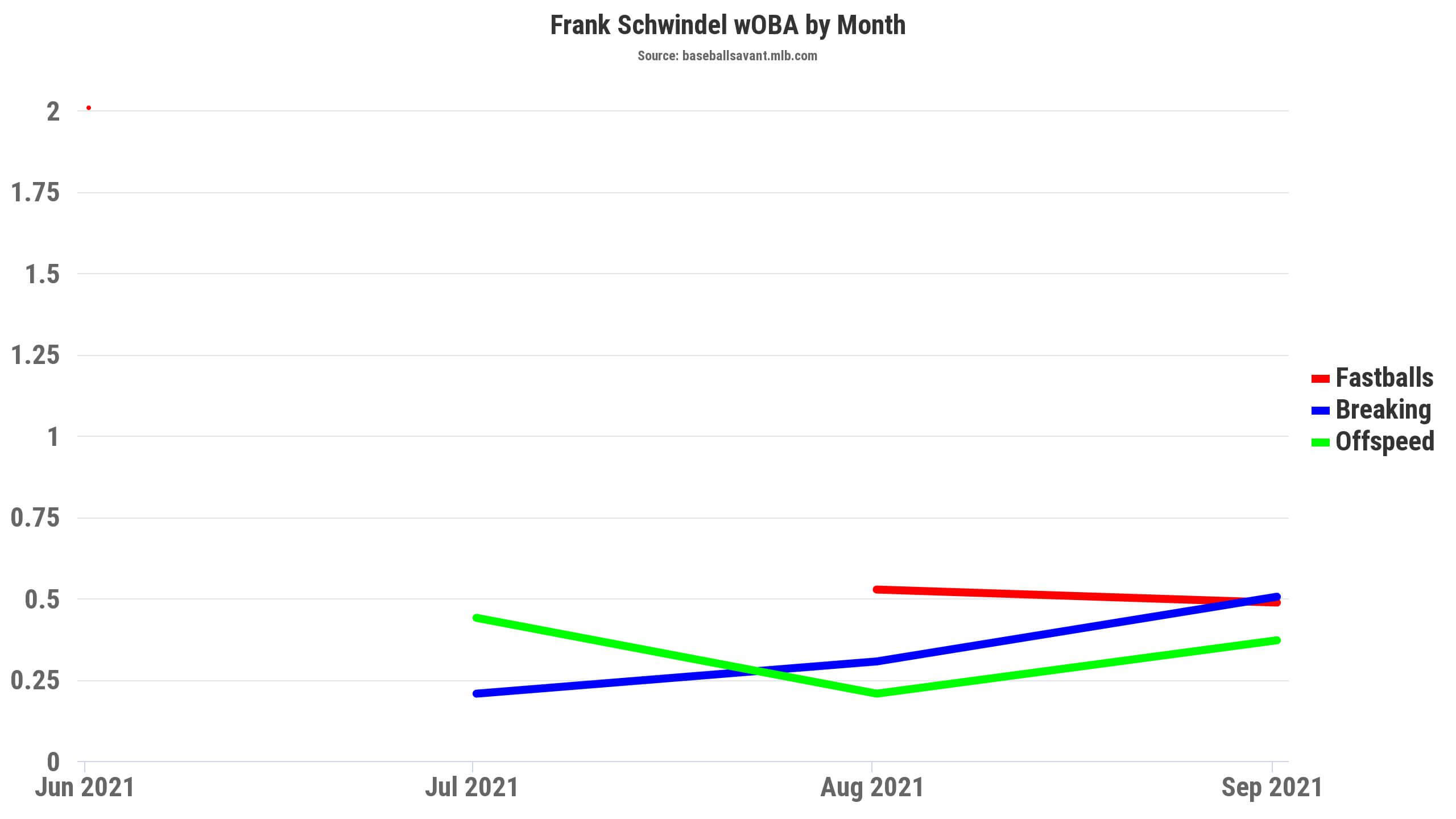 Should We Buy or Sell Schwindel?

Sure, it’s a fun ride to scoop up a player like Frank Schwindel and reap the rewards of the fantasy production. However, given the lack of track record and prospect pedigree, it’s natural to have some skepticism. Given Schwindel’s relatively high pull rate, one area to monitor includes the wOBA against the shift. In 2021, teams have shifted against Schwindel 11.1% of the time, and he has a .347 wOBA versus when that occurs.

We’ve observed this happening several times before, where teams adjust their approach to hitters. Sometimes they shift more to players that tend to pull the ball. If Schwindel remains hot to finish the season, expect him to have sleeper status in 2022. However, if his ADP jumps inside the top 300 picks, we hesitate to buy rather than sell Schwindel’s profile.

Cleveland tends to have a reputation for developing pitchers such as Shane Bieber, Zach Plesac, Aaron Civale, and Triston McKenzie. With Cal Quantrill moving into the rotation, some folks touted him as a sleeper heading into 2021 after the trade with the Padres. Overall, Quantrill’s profile looks odd with mediocre strikeout and walk rates. A 19.6% strikeout rate and 7.9% walk rate shouldn’t excite you since that’s typically not a recipe for success.

Cal Quantrill mixes up four different pitches with a sinker, slider, four-seamer, and changeup to account for around 95% of his pitches. After relying heavily on the sinker earlier in the season, Quantrill adjusted the usage significantly from July and beyond. That makes sense, given his success starting from July forward.

Quantrill relies on the slider to whiff pitches with a 30.5% whiff rate. Even from a Run-Value standpoint, it rates as Quantrill’s best pitch with a -12 Run-Value per Baseball Savant. Meanwhile, the rest of Quantrill’s pitches look mediocre from a whiff rate and wOBA allowed standpoint. Outside of Quantrill’s four-seamer boasting two inches more horizontal movement versus the average four-seamer, the rest of his pitches don’t stand out from a movement perspective.

Cal Quantrill thrives in the shadow areas and heart of the zone, evidenced by the negative Run-Values. Since Quantrill throws at least three pitches with a zone rate above 50%, it makes sense that he thrives in those areas. At this point, fantasy managers will keep riding the wave.

Should We Buy or Sell Quantrill?

As noted earlier, it’s typically a smart move to scoop up Cleveland pitchers in fantasy baseball drafts. Outside of Triston McKenzie, it seems most of the Cleveland pitchers rely on non-fastballs. The question remains whether we should buy or sell Cal Quantrill, but the stuff, control, and command don’t make it obvious. From a fantasy perspective, Quantrill ranks as the 50th starting pitcher according to the Razzball Player Rater near Wade Miley and Shane McClanahan.

During Quantrill’s hot streak, he ran into some fortune with the BABIP allowed and strand rate. That said, when those numbers regress, we’ll see a negative bump in ratios, and Quantrill doesn’t have the filthy stuff to make that work. Assuming no significant changes or reports about Quantrill making adjustments, I’ll probably recommend not buying into him but rather sell what’s going on. If Quantrill’s ADP dips in 2022 (which I don’t expect), then swoop on in as a flier late in drafts. A lot could change from September to March of 2022, so don’t just toss Quantrill aside due to ratio regression.