Fantasy Baseball: Five Hitters To Add For The Championship Week 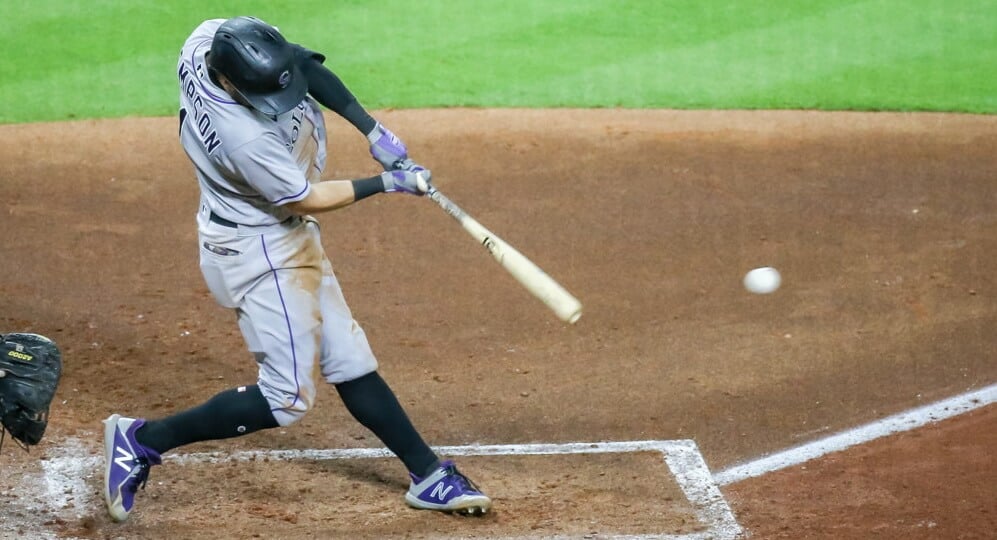 It’s officially THAT time of the season, everyone! From our pre-draft prep to all of our in-season trades and waiver claims, it has all led to this. With about a week left in the MLB season, this is your last time to make that first-place push. Whether that’s winning a championship head-to-head matchup or boosting your categories further, there are definitely moves you can make to strengthen your case for first place!

Today, we’ll be looking at five hitters that you can pick up off the waiver wire. All of them offer value in whatever scoring format you play in, and, most important, have favorable schedules for the rest of the year. With that in mind, the teams we’ll focus on are the:

So, who is going to help get you to that first-place finish? Here are five hitters to add for the final games of the season!

It’s been quite the first full season for Bobby Dalbec. Up until the trade deadline, the 26-year-old posted a 73 weighted-runs-created-plus (wRC+), 37.5% strikeout rate, and, despite all of his power, posted just a .183 isolated power (ISO). In other words, he wasn’t providing the production the Red Sox needed at such an offense-oriented position. This prompted the Red Sox to trade for Kyle Schwarber, but since Schwarber still was on the injured list at the time, and the team was dealing with a COVID-19 outbreak, Dalbec still had one last chance to prove that he could be a key contributor for them.

Well, it is safe to say he has done just that. Since the trade deadline, Dalbec has a 200 wRC+ and .426 ISO, which is just absurd. For perspective, the wRC+ means he’s been 100% better than the average hitter. Wait, wasn’t this someone whose struggles forced Boston into trading for his replacement? What changed?

What stands out is the strikeout rate, which is down to 25.7% in this span. Now, his contact rate (66%) is roughly the same as it was before, but Dalbec has helped compensate for this with a change in approach: 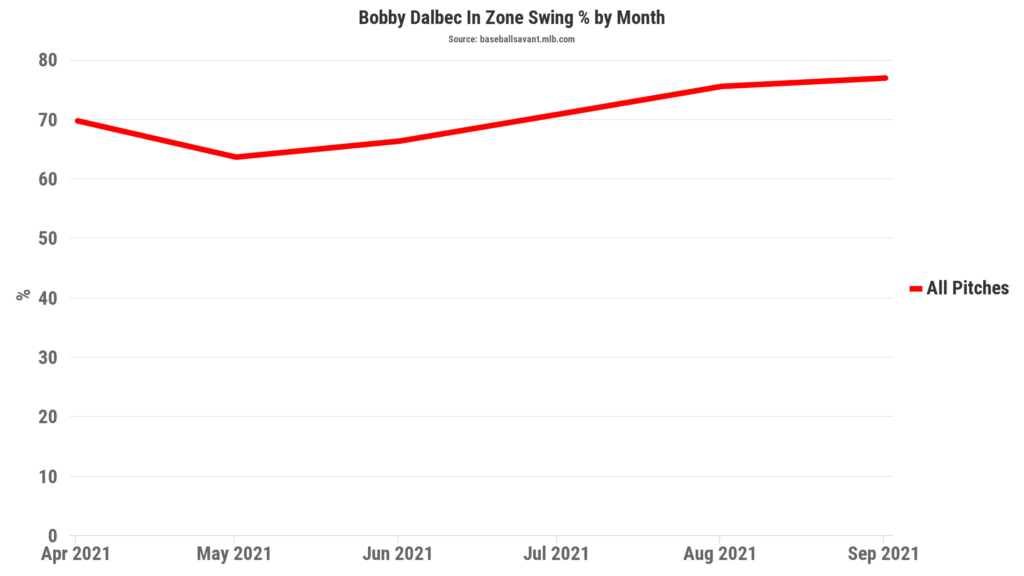 By being more aggressive early in the count, Dalbec is able to be in more situations where he can hit for power, which is optimal. Meanwhile, he’s also increased his contact rate in two strikes, which could mean this is all a fluke, or something else; could his in-zone swing rate be a sign that he’s looking to hit for power earlier in counts, and if stuck in two strikes, is being more defensive? If so, then you’ll continue to see a lot of power complemented by a batting average that isn’t a liability, boosting this stock moving forward.

This season, Dalbec has a .375 wOBA and 21.2% barrel vs lefties. In other words, you’ll want to roster him as the Red Sox set up to face five consecutive lefties in favorable stadiums (Boston and Baltimore). This likely only applies to shallower leagues, but if he’s somehow available on the waiver wire, you need to rush to add him to your team! Expect more “barrels from Bobby” to end the year.

When you hear that the Rockies have a home stretch coming up, you’d be silly not to run to the waiver wire to see which Rockies players are available. We’ll touch on a couple here, but let’s start with Garrett Hampson.

With Raimel Tapia struggling, Hampson has gotten a lot of opportunities to hit out of the leadoff spot for the Rockies, which is the prime lineup position for him in terms of fantasy production. The lineup spot combined with just one off-day gives him plenty of opportunities to steal bases (17 SB), in addition to scoring runs if the Rockies continue to score runs at home. If you’re in a Roto league, those might be the exact categories you need!

Do you know what you need to do in order to steal bases and score runs? Be on base in the first place! Well, Hampson is in luck here! Here are his career home/road splits:

Those are drastic splits, but not uncommon for a Rockies player; it’s the reason we look to add them when they’re at home, after. all. This season, these splits are actually wider, with Hampson being nearly a .300 hitter with a .201 ISO at home this year. As someone who makes has even sprays, makes contact at an above-average rate, and is also an incredibly fast runner, he’s the perfect player to benefit from his home park. With his positional versatility, he’s definitely someone you should be able to insert with ease. From there, just enjoy the benefits!

Here we go with another Rockies player. To be honest, Brendan Rodgers is just a good player that you should probably have rostered in a normal situation. He has a 129 wRC+ on the road this season and has a strong batting average (.287) with some power (.187 ISO).

As someone who doesn’t strike out much (19%), has even sprays (just a 29.7% pull rate), and doesn’t hit many pop-ups, Rodgers might be the perfect hitter for Coors Field, where he’s hit .292 this season. Frankly, with that information, you can make a case that his batting average should be even higher!

When looking for hitters who will hit for a higher average than you expect, Rodgers fits almost all the criteria, outside of speed. In addition to batting average, he’s a strong bet to provide you with runs, and hopefully some power as well. To find someone on the waiver wire who can contribute in three categories, and be very useful regardless of scoring format, isn’t super common.  The middle infield spots aren’t particularly deep in terms of fantasy performers for the week, making Rodgers the perfect stopgap. In dynasty leagues, he’s someone to target right away. As for redraft leagues, you can get a nice taste of what you could be getting if you draft Rodgers in 2022.

In deeper leagues, this is my ultimate “sleeper” add right now. The Rangers not only get to play the Orioles and Angels but will face four straight lefties as well. Thus, it would behoove us to look for a right-handed bat to add, and I believe I found one. That’s right; Andy Ibanez could be the player that takes you to the promised land.

The 28-year-old Ibanez is sure to play against lefties, which is something he definitely deserves to do. Quietly, he’s posted a 103 wRC+ this year, while playing games at second base, third base, first base, and the outfield. If you look at just the games he’s played since being re-promoted from the minors on June 21st, that wRC+ increases to 115. This might not be a player you’re familiar with, but he’s definitely been productive offensively this year.

What stands out with Ibanez is his 13% strikeout rate. This helps increase his floor from a batting average perspective, and it’s more impressive when you combine it with a 7.5% barrel and 31% under. As we’ve discussed, a high under% can be a way to overachieve your power numbers, and although he plays in a tough ballpark, four games in Baltimore could be just what he needs to improve his power production. Since the beginning of 2019, he’s also posted a .217 ISO in the minors, which should add more assurance about his ability to provide some power.

Long story short, Ibanez is a player who’ll hit for average, but has some of the qualities of someone who can fit for acceptable power as well. He’s certainly been productive (143 wRC+) versus lefties thus far, and although you shouldn’t read much into small sample numbers, righties do naturally have a platoon advantage over lefties. THE BAT X projects a 104 wRC+, .256 average, and .176 ISO, and I think that might be underselling him in terms of batting average. He’s not a flashy player for ROTO leagues. That being said, in head-to-head matchups or if you’re looking to balance the offensive categories, he’s a player to take a flier on in deep formats. Sometimes, your top contributions come from the most unexpected spots!

Before we get into the intrigue with Yonny Hernandez, let me start out by saying this is not a player to pick up now. Hernandez generally doesn’t play against lefties, so his playing time will be questionable over the next five games. However, after that, Texas isn’t scheduled to face another lefty for the rest of the season. Essentially, from Wednesday, September 29th through the rest of the year, Hernandez is someone worth picking up in deeper leagues?

Why? Well, Hernandez does one thing well, and I mean really well. In just 135 plate appearances, the 23-year-old has nine stolen bases. This comes after stealing 21 bases in just 251 plate appearances in Triple-A this season, while he stole 35 bases in the minor leagues in 2019. He’s one of the few players on the waiver wire that is projected to steal multiple bases for the rest of the season, and if you’re in a traditional category league, that could be very meaningful.

Yet, Hernandez could also provide you with some help in the batting average department, as well as in points leagues. His contact trajectory (32.6% flare/burner), opposite-field approach, and contact skills indicate that he should be hitting for a much higher average, even if he hasn’t thus far. Plus, as someone who has strong strikeout (16.3%) and walk (10.4%) numbers, he has some value in points leagues as well.

I wouldn’t recommend picking up Hernandez unless you’re comfortable in where you are in your Roto league in terms of power or believe his lack of power can be overcome by other powerful hitters on your team. Still, in those five straight games against a righty, he could be the player that gets you that stolen base to put you over the edge. Swapping out Ibanez for Hernandez on that Wednesday appears to be a logical way to leverage the Rangers’ schedule, and help you all-around. It’s the best of all worlds for two players that aren’t even rostered in over 3% of fantasy leagues!

You’ve put in so much work to get to this point; no is the time to take what is yours! I wish you the best of luck in your push for first place, and hope that these five players can perhaps help put you over the top. It’s been a long season, yet, all of a sudden, we can now play with a little bit of urgency. Now, it’s time to make those last waiver claims, set your lineups, and let the rest unfold for itself!