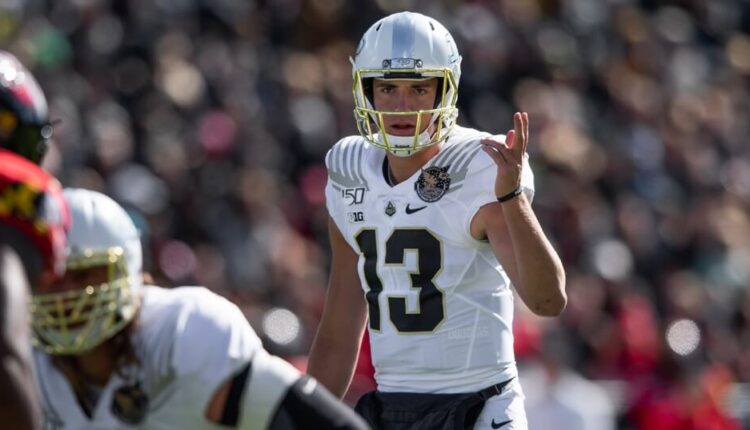 It is College Fantasy Football Championship Week. Hopefully, you are still alive like myself. I cannot wait to enjoy sitting in my recliner in front of the TV and relaxing for the first time since mid-August. I look forward to a long weekend of fantastic football, tasty turkey, dynamic desserts and incredible IPAs. To conclude the 2020 CFF crusade, I have combined the college fantasy football waiver wire and the CFF sleepers columns into one article to assist those seeking a free agent starter in order to secure a ring.

Good luck this weekend and enjoy the turkey, football, and fantasy insight.

I have waited for two years to see JT Daniels live up to the high expectations coming out of high school and arriving on the USC campus. He lost the Trojans’ starting position to Kedon Slovis and decided to transfer to Georgia.

Unfortunately, Daniels began the season injured and did not get on the field until Saturday against Mississippi State. He made a spectacular first impression: The sophomore passed for over 400 yards and four touchdowns in the 31-24 victory over Mississippi State.

The Bulldogs travel to South Carolina to battle the lackluster Gamecocks. Georgia needs to get plenty of reps for its new quarterback, and Daniels should attempt nearly 35 passes again. If you need help, grab the new Georgia quarterback.

For 116 years, the Egg Bowl has provided an underrated rivalry, which I look forward to watching on Saturday. The Bulldogs and Rebels battle for the Golden Egg, and Mississippi has taken home the prized possession 62 times. In the past decade, Mississippi State has won six games. In 2020, the Bulldogs are road underdogs in coach Mike Leach’s first in-state rivalry.

A true freshman, Will Rogers was a three-star prospect by the major recruiting services and ranked as a Top-25 pro-style QB last year. In 2020, he is one of nine true freshmen to debut and one of 19 Bulldogs to make their first career start.

In the program’s history, Rogers became the seventh true freshman to start at quarterback. He led the Bulldogs to a 24-17 victory over Vanderbilt, but the team lost to Georgia 31-24 on Saturday. In his two starts, the Mississippi State triggerman has passed for 562 yards and two touchdowns. His 41 completions versus Georgia are a record by a freshman quarterback at Mississippi State.

Hopefully, the game will kick off despite Mississippi State only suiting up 49 scholarship players against Georgia. The Rebels’ offense will easily put points (41 ppg.) on the scoreboard, and Las Vegas projects a healthy number of touchdowns in the 117th Egg Bowl. The Bulldogs likely play from behind, and Rogers might surpass last week’s 52 attempts.

Who would you feel best plucking off the waiver wire and inserting into your lineup at quarterback?

If all of the following teams finished undefeated, which one should earn an invite to the CFP Playoffs:

“BYU and it ain’t close. Zach Wilson is outstanding and they have a good enough defense for him to win any game against any team.” @aceholesrule

It has not been a memorable season for the Blue Devils, who have won only twice in eight games. Mataeo Durant has been one of the team’s bright spots over the past four games.

At 6’1 and 195-pounds, Durant has surpassed the century mark three times (163, 104 and 132) while rushing for 408 yards and scoring five times on the ground. “He goes from point A to point B in a four-yard space better than anybody we’ve had…he’s got plenty of speed. He’s got great short space quickness and feet. He’s made some of the better runs I’ve seen here recently,” coach David Cutcliffe (goduke.com).

For the season, the junior leads Duke in yards (592), rushing touchdowns (6) and yards per carry (7.2). Duke travels to Georgia Tech and has a scrumptious matchup against the Yellow Jackets. QB Chase Brice and the aerial assualt have been stuck on the tarmac all season and rely on the ground game to move the chains. If you need a running back at flex, Durant can be a fantasy filler this weekend.

Over my 13 years playing college fantasy football, MAC teams have provided so many fireworks and memories. It is wonderful to have the Mid-American Conference back and on the field this weekend.

Against Kent last week, he rambled for 202 yards and four touchdowns. “The O-linemen were opening up holes and I just feel like [Kent State] didn’t want to tackle. So that was a big advantage for me, taking advantage of them not wanting to tackle at the second level,” Dollard reflected on his performance (beaconjournal.com).

A JUCO transfer from Independence Community College, the 5’10” and 205-pounder has already exceeded last year’s leading rusher (Brandon Lee with 179 yards) and thrusted Arkon to a competitive-level club. Dollard can assist desperate CFF managers who need a boost in the backfield.

Who would you feel best acquiring as a free agent and inserting into your lineup at running back?

All running backs are on less than 50% of CFF teams.

“Teon Dollard looked very explosive for Akron the past two weeks and goes up against Miami of Ohio next. The RedHawks give up 180 yards rushing per game.” @aceholesrule

Before reading, I have to confess that I am a CT Yankee by birth, and a Michigan fanatic for over 40 years. Why inform CFF diehards of my potential bias? I do not want there to be any conflict of interest in my analysis. Cornelius Johnson was named the 2018-19 Gatorade Player of the Year in Connecticut before enrolling at Michigan.

The Wolverines opened the season losing three of their first four games and were down 17 points against Rutgers in the second quarter on Saturday. Coach Jim Harbaugh changed quarterbacks and Cade McNamara immediately connected with Johnson for a 46-yard strike, cutting the deficit by six against the Scarlet Knights. When the game ended, Johnson logged five receptions for 105 yards and a pair of scores.

The sophomore playmaker did not record a catch in the first two games of the season. Nevertheless, Johnson has shined over the last three weeks with 13 catches for 221 yards, averaging 17 ypc., and three touchdowns. The 6’3” and 205-pounder has risen in the pecking order at Michigan and offers a nice option in championship games for CFF coaches.

Who are you targeting on the waiver wire and inserting into your lineup at receiver?

All receivers are on less than 50% of CFF teams.

“I had to play against Ty Fryfogle in the semis…got lucky to get by that dude. He is a baaaaaaaaad man.” @aceholesrule

I do not usually promote tight ends during the season, but Greg Dulcich deserves the attention of the CFF community. In three games, the sophomore has snatched 11 passes for 261 yards and two touchdowns. The Bruins have a great matchup against the Wildcats, and Dulcich will be a key component of the aerial assault again.