Week 10 Wide Receiver Sleepers: Chark it Up to D.J. 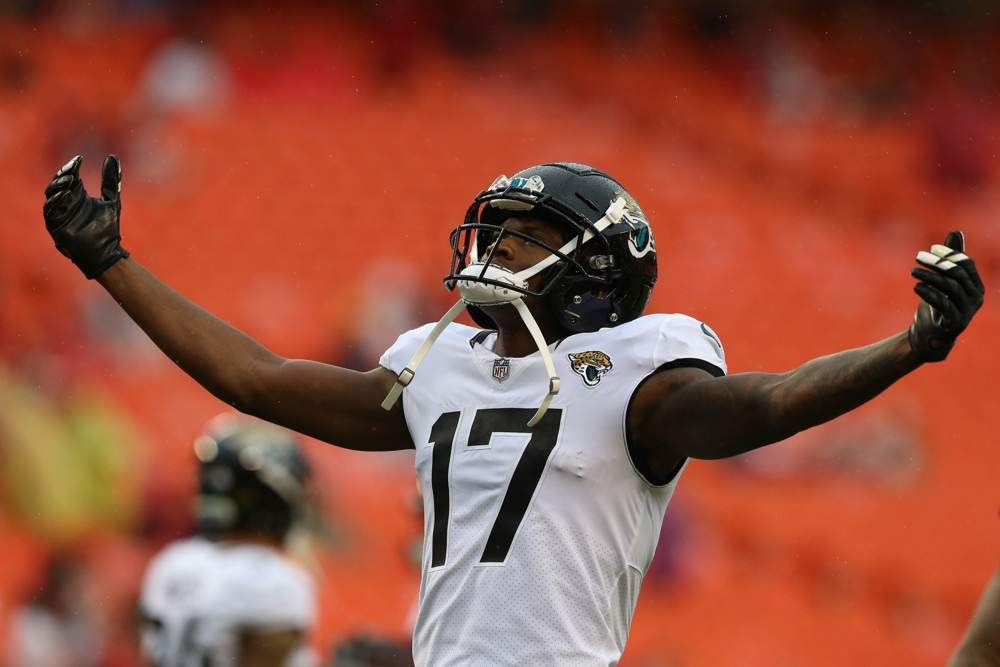 Every week some wide receiver nobody was talking about seems to come from out of nowhere to have a huge game. Wouldn’t it be nice if we knew this ahead of time? We’ll never get it exactly right, but with my Week 10 wide receiver sleepers I’ll try to come as close as possible to identifying those big breakouts before they happen.

It has been extremely difficult figuring out who you can trust with the Jaguars wide receivers. I have been going with the “don’t trust anyone” motto all season, channeling my inner Stone Cold Steve Austin.  However, I am here today, to pull out a STUNNER and open up a can of D.J. Chark for Week 10. Oh, hell yeah.

Alright. I hope that hit home with you wrestling buffs, but seriously, Chark is a legit option this week. Keelan Cole’s production has been way down recently and he only played on 23 percent of snaps last week. He was healthy.

The Jaguars took Chark with a second-round pick despite having Cole, Dede Westbrook, and signing Donte Moncrief. Of the three mentioned, Cole has been the least efficient catching only two of seven targets in Week 7 and two of three targets in Week 8 for only 18 yards. In those two weeks, Chark has 12 targets and eight receptions for 72 yards.

After a Cole fumble in Week 8, Chark stepped right in and played a season-high 75 percent of the Jaguar’s offensive snaps. He was also targeted twice in the red zone, including a shot in the pay dirt that could have potentially won the game. Unfortunately, the ball was just out of reach and well defended.

Chark is one of my Week 10 wide receiver sleepers against a Colts team that just allowed touchdowns to Brand LaFell and Seth Roberts in Week 8. Give me Chark’s 4.3-speed (98th percentile for his size according to playerprofiler.com). The 6’3″, 199-pound receiver out of LSU is a great”boom” play if he is going to see at least 75 percent of snaps.

Everyone knows that Tyler Boyd is going to command the bulk of targets in the Bengals passing game in Week 10. A.J. Green will miss this week with a toe injury. Boyd has proven himself to be capable of handling a heavy workload, even though we have not seen much of him without Green.

Just like we have seen in the past with guys like Randal Cobb, being the No. 1 option does not always translate to fantasy production. That is yet to be determined with Boyd who is in his third year.

Boyd is a clear-must start as I believe he will get by on volume alone (10+ targets easily without Green), but Andy Dalton has to throw to someone else. I imagine the Bengals will use the tight end C.J. Uzomah and try and get Giovani Bernard on the field if he is healthy.

Josh Malone, however, is a name to think about that could have a nice day. While Marshon Lattimore of the Saints will most likely be focused on Boyd, Malone will be on the other side. John Ross practiced on Monday and should be in on three wide receiver sets. I like him as a “boom” play while Malone can be more of a possession guy in Green’s absence.

In Week 3, A.J. Green left the game against the Panthers early in the third quarter. It was Josh Malone who stepped in and played a season-high 45 percent of the Bengals offensive snaps. Alex Erickson will also be on the field, but Malone is the more explosive player and should be relied upon more in this game. In that Week 3 game, Erickson only saw 11 percent of snaps which determines the Bengals favor Malone.

This will be a DEEP play in redraft leagues but I anticipate Malone will play 80 percent of snaps unless the Bengals make a move this week. The former fourth-round pick out of Tennessee is 6’3″ and 208 pounds. He ran a 4.4 40-yard dash at the NFL combine which is in the 93rd percentile for wide receivers at his size according to Playerprofiler.com