Week 10 Running Back Sleepers: Back the Mack 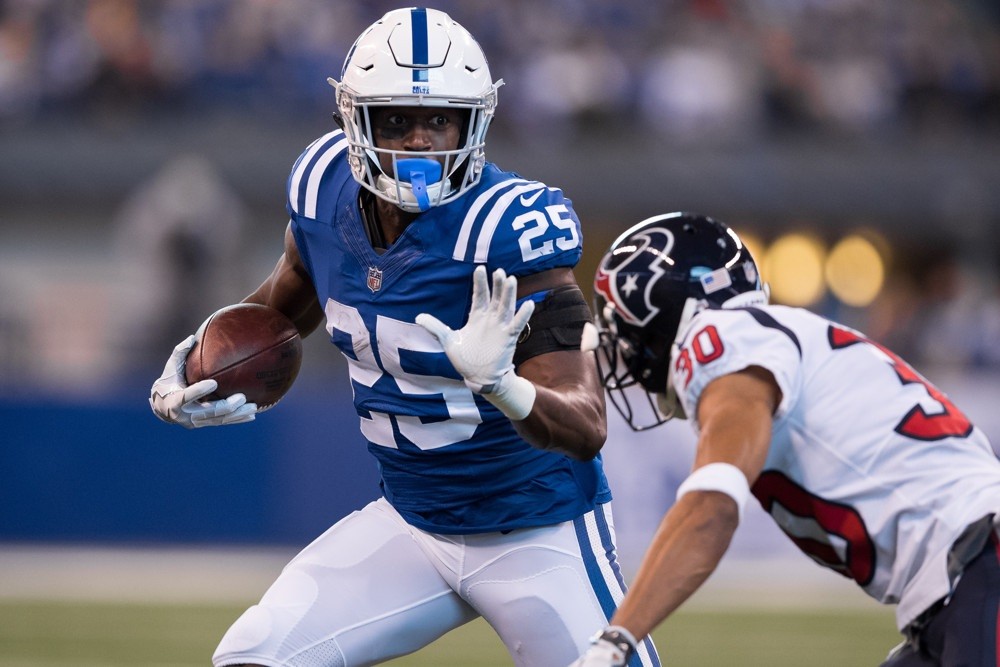 Whereas Week 10 does not threaten to alter the fantasy quarterback landscape a great deal, there are a number of fantasy owners who will feel the sting of this week’s byes. Six of the top 36 fantasy running backs are off this week, and that does not include Dalvin Cook. With so many running backs out of action, finding sleepers at running back will be an important part of roster construction this week. These are my top Week 10 running back sleepers.

Indianapolis and Jacksonville square off in a battle of division rivals in the AFC South. Each team was going in opposite directions heading into their Week 9 byes. Jacksonville has lost four straight and their previously impenetrable defense had begun to show cracks. During their last three games, the Jaguars have given up 4.11 yards per carry to opposing running backs. While that number is not abysmal by any means, it shows that the Jaguars are a defense you can beat on the ground. Enter Marlon Mack of the Indianapolis Colts.

Mack had been on fire entering the Colts’ bye week. He had posted top-three fantasy finishes in each of his last two weeks, finally hitting his stride following an early-season injury. However, he sits outside the top-20 in this week’s rankings. I suppose that is based on what is perceived to be a difficult matchup, but I will give him the benefit of the doubt based on his massive upside. The second-year back is always a threat to make a big play. His 6.9 career breakaway percentage (rushes of at least 15 yards) puts him in elite company. The Jaguars are likely to focus their attention on Andrew Luck and the passing game. I believe they may sleep on Marlon Mack this week. Fantasy owners should not make the same mistake. Start Mack as an RB2 with an incredibly high ceiling.

Duke Johnson was one of my top sleepers last week and finally broke free from a season-long slumber to post a top-seven fantasy finish among running backs in Week 9. Many will point to the removal of former head coach Hue Jackson and offensive coordinator Todd Haley as the freeing force behind Johnson’s monster performance last week. Others will argue that Johnson’s increased workload was very game plan and game-script specific. Either way, I am going back to the well and including Johnson as one of my Week 10 running back sleepers as well. He is in line for another big day when Cleveland hosts the Atlanta Falcons.

As was the case last week, Cleveland’s opponent boasts a high-octane offense. The Browns will struggle to keep up and may find themselves in negative game situations. This should benefit Johnson, who is light years ahead of backfield mate Nick Chubb in terms of pass-catching ability. The Falcons also perennially allow the most receptions to opposing running backs. All signs point to Duke Johnson having another decent workload in Week 10. I would not expect another RB1 performance, but an RB2 finish is certainly within reach, particularly in PPR leagues.

Chris Carson has emerged as Seattle’s lead back, but unfortunately, he has encountered several nagging injuries of late. He tried to tough it out last week but left early due to a lingering hip issue. Carson will be difficult to trust this week, which presents a great opportunity for Mike Davis when the Seattle Seahawks travel to Los Angeles to take on the Rams.

Davis has filled in admirably when called upon. In fact, he and Carson both provided top-18 finishes in Week 5 when the Seahawks last faced the Rams. In that game, Davis had 12 carries for 68 yards and a touchdown. He has proven to be a very capable runner, and I do not expect a major dropoff should he get the bulk of the work. Perhaps most encouraging to me last week was Davis’ usage in the passing game. Davis caught a career-high seven balls last week. He could once again be used as a safety valve against an attacking Rams’ defensive front. The Rams have allowed 55 receptions to opposing running backs this year, tied for fifth-most in the NFL. With Carson’s status in doubt, I think Mike Davis is a potential top-20 back this week, making him one of my favorite Week 10 running back sleepers.

Elijah McGuire broke his foot during the preseason and missed the first eight games. When Bilal Powell went down recently with a neck injury, Trenton Cannon stepped in. Many were wondering if Cannon would be able to hold off McGuire upon the latter’s return. Based on last week, it is clear New York still favors McGuire. McGuire out-snapped Cannon 36-7 and out-touched him 10-1 in last week’s game. I would expect McGuire to hold a similar edge this week when the Jets host the Buffalo Bills.

There is not a whole lot going on offensively for the New York Jets these days. They have scored just 33 total points during a three-game losing streak. Rookie quarterback Sam Darnold has thrown seven interceptions during that stretch and leads the NFL with 14 picks on the year. The Jets would be wise to protect their quarterback amidst his recent struggles against a capable Bills’ defense. I believe McGuire is in line for double-digit touches again this week. McGuire has Flex potential against Buffalo, who has allowed 4.42 yards per carry to enemy backs over their last four games. With several prominent running backs facing a Week 10 bye, Elijah McGuire could be a useful deep sleeper this week.