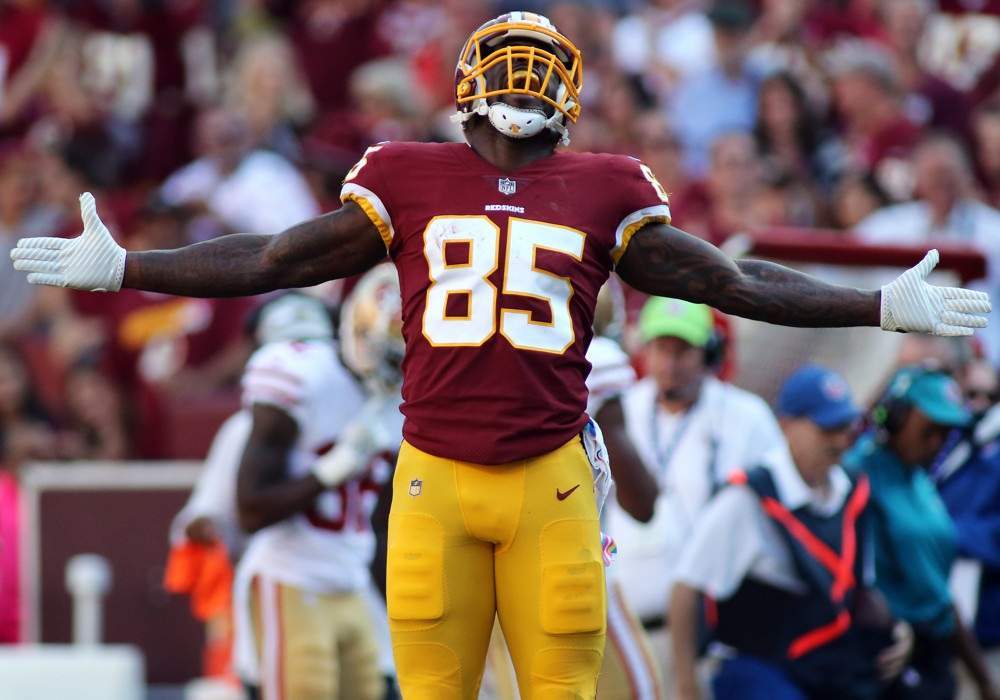 Alex Smith coming over to the Redskins in the offseason meant a reuniting of Smith and Davis. It was Smith that was the tight end’s quarterback in San Fransisco where Davis put up elite numbers. In 2009, Alex Smith’s first game was in Week 6 and he found big Vernon Davis for three touchdowns. The two would connect 10 times for touchdowns in 11 games that season. Of course, that was 2009.

Last week against the Falcons, Davis was on the field for 46 percent of snaps which is about his average on the season. He was targeted seven times and caught five passes for 62 yards. More importantly for Davis, Jordan Reed has been completely underwhelming even though he has been “healthy.” He saw his lowest snap count since Week 2 (54 percent) and only caught four passes for 34 yards.

Look for Davis to be used against the Buccaneers who have been lit up all season long. Greg Olsen had success against the Bucs last week (six for 76 and a touchdown), and the team has allowed at least 10 points to tight ends in six of eight games this season.

Zach Ertz is the No. 1 dog on this Eagles team, but Goedert could eat well against the Cowboys on Sunday Night Football. Goedert has scored touchdowns in two straight weeks, so we know that the Eagles want to get him involved. He is being targeted in the end zone (he has seen five red zone targets this season), and has been on the field for about half of the Eagles offensive snaps.

The Eagles swapped draft picks with the Colts in the second round and selected Goedert with the 49th overall pick. Who had the 50th pick? The Dallas Cowboys. The storybook narrative was there for the Cowboys to draft a tight end named “Dallas” to replace their Hall of Famer Jason Witten.

Now, the Eagles will have an opportunity to use their touchdown threat against the Cowboys. Make it three straight games with a touchdown for Goedert.

Week 10 Wide Receiver Sleepers: Chark it Up to D.J.