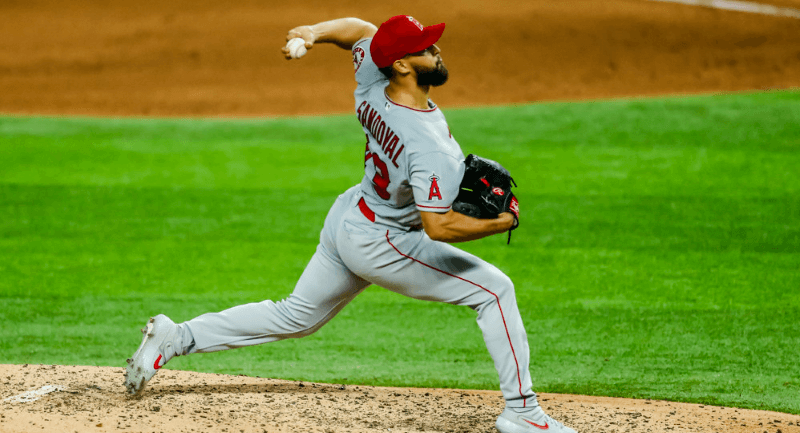 It feels as though I’ve been punished for missing a week writing the Barometer. My consequences don’t include public flagellation or even a trip out back to the woodshed. No, my punishment is (again) removing the overall SP1, Jacob deGrom, from my starting pitcher rankings. There is not yet a timetable for his return from some nebulous forearm tightness. He has begun throwing off a mound at least, so hopefully, he’s back soon. Please stop chasing me down the street with a cat o’ nine tails.

Patrick Sandoval, LAA (+16) – Boy do I love Patrick Sandoval. Not so long ago I mentioned how his changeup usage has steadily increased. It continues to dominate. In his latest effort – 8.2 IP, 1 H, 1 ER, 1 BB, 13 K vs the Twins – Sandoval earned an incredible 13 whiffs on 29 changeups. The pitch earned a 48% CSW. It’s not just his changeup that is effective, either, as he finished with a 37% CSW overall. He has a strong five-pitch mix if you separate the sinker and the four-seam along with his change, slider, and curve. 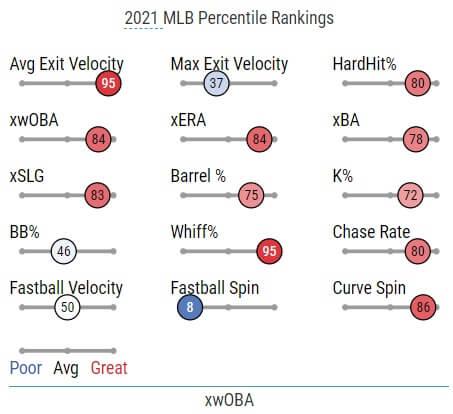 Sandoval has an elite 95th percentile overall whiff rate. This is mostly thanks to his insane 54.2% whiff rate on the changeup. However, he also has a great 40.2% whiff rate on the slider. All told, there’s serious SP2 upside here. I’m trying not to get too ahead of myself, so he’ll continue to rise as he remains consistent. The strikeouts give him a high floor even if/when his .254 BABIP rises.

Tyler Mahle, CIN (-19) – Mahle has been inconsistent over the past month or so. Over his last six starts (31.1 IP), Mahle has a rough 5.17 ERA, 1.60 WHIP, 11.8 K/9, and 5.5 BB/9. As you can see, his control has left something to be desired. His lack of control and command has also led to a bunch of long balls, with a whopping 2.3 HR/9 over that span. His strikeout rate remains very sexy-time, but he’s pitching more like a mid-rotation fantasy piece than the potential SP2 he looked like earlier in the year.

Kyle Gibson, TEX (-23) – Another starter I mentioned two weeks ago as a sell-high, Gibson’s expected regression has hit hard. Over his last three starts (17.1 IP), Gibson has imploded with a 7.79 ERA, 1.96 WHIP, 6.8 K/9, and 6.2 BB/9. Your K/BB ratio is gonna look pretty rough when one of those starts includes eight walks. He can still be used as an occasional streamer, although it’s hard to feel too confident when two of those last three starts came against a rough Tigers lineup. You’re benching him everywhere until he gets out of this skid.

Josiah Gray, LAD (SP77) – When a pitching prospect of note gets called up by the Dodgers, people’s ears perk up. Whatever that means. Some people can’t even move their ears. In any case, Gray has two starts so far, in which he has allowed six runs in eight innings with a 13:5 K:BB ratio. Gray’s fastball sits around 95 MPH from the right side. He complements it with a slider and curveball. He also has a changeup but deploys it very rarely.

We were treated to a very overcast matchup in Gray’s last start – against Rockies starter Jon Gray. Every pitch earned a 35% or better CSW for (Josiah) Gray in that one, with his curveball being deployed far more than his slider. The Dodgers tend to limit innings, so Gray might not exactly be a quality start machine. His control was sterling in the minors, though (sub-2.92 BB/9 at every stop). So things should improve in that regard moving forward. He’s worth a spec add in deeper mixed leagues.

Tanner Houck, BOS (SP78) – Houck has been bouncing between the rotation and bullpen for the Red Sox. After his latest eight-strikeout start, however, Houck might be sticking in the rotation moving forward. We’ll see who gets bumped when Chris Sale returns, but for at least a week, we can drool over Houck and this insane slider.

His slider earned a devastating 52% CSW on 33 pitches against the Yankees in that latest start. What limits his upside and potential starting role at this point is his lack of a third pitch. He’s essentially just fastball/slider, deploying his splitter just 4.4% of the time. If he can develop a decent third offering to prevent platoon splits, his upside would rise dramatically. For now, he’s in the same boat as Gray – the USS Deep League Spec Add.