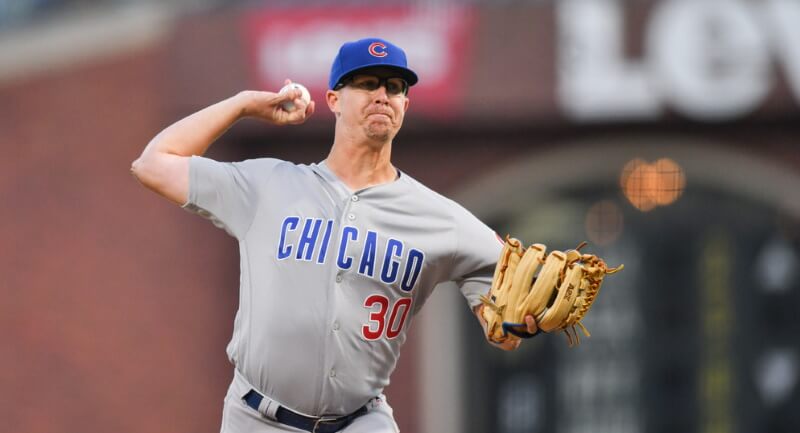 I hope everyone had a fun and safe Fourth of July! I’m coming to you a few days late because of the holiday. I can’t just sit in my lair, hovering over box scores every day, you know. Sometimes I’ve gotta get out and punish my liver like a solid chunk of America. Anyway, sit back, let those hot dogs digest, and enjoy some news and notes along with my current starting pitcher rankings. 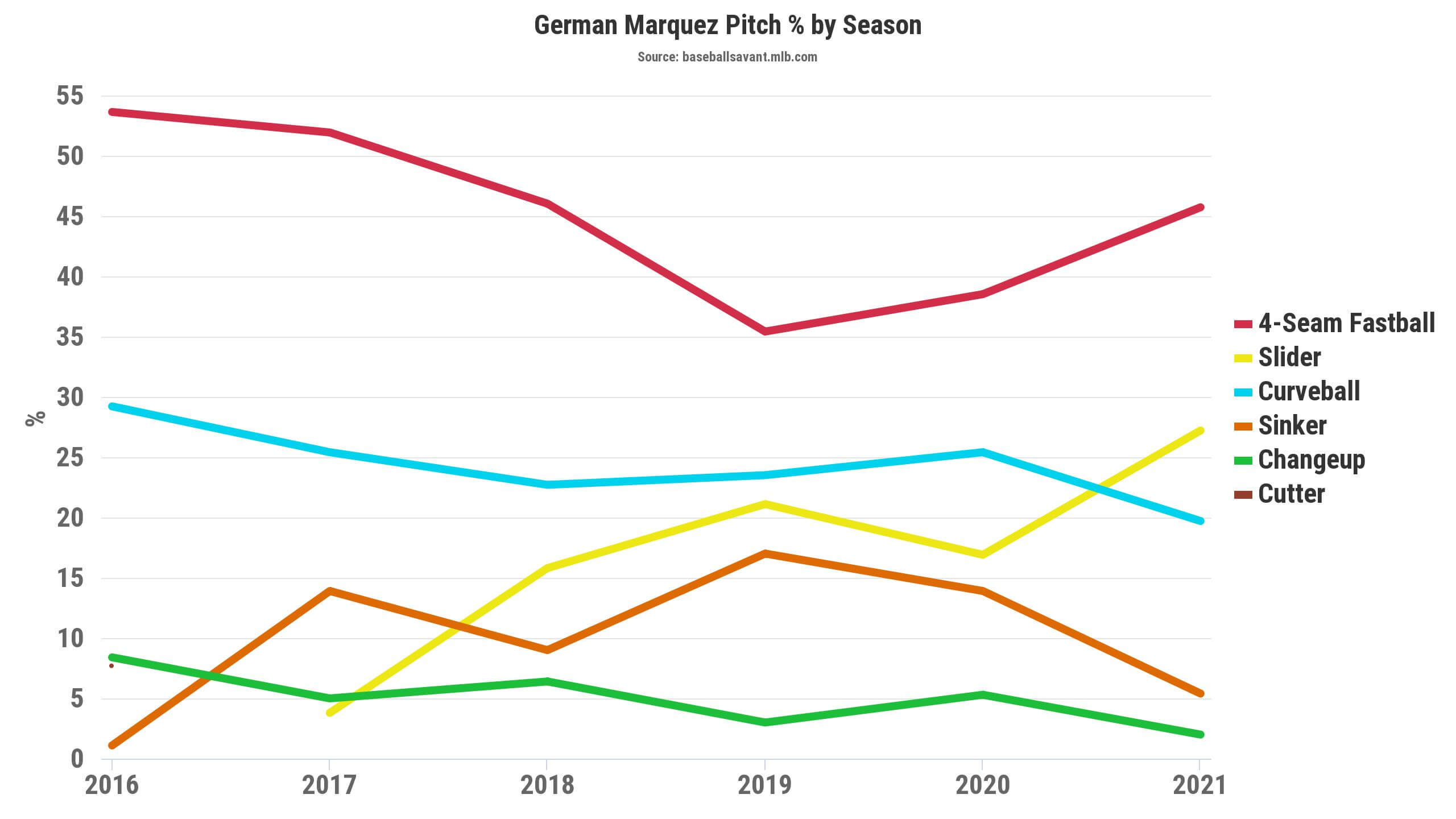 Marquez has relied on his slider more than ever in 2021 (23%). It’s been his moneymaker, earning a 44.7% whiff rate and .263 wOBA (.230 xwOBA). It will always be hard to trust a Rockies pitcher for too much, of course. You can’t just sit him at home, either, as his home ERA is 3.06 compared to his 4.67 away ERA. A lot of that is small sample shenanigans, obviously, as his career split is much different (4.70 home / 3.61 away). Still, it muddies the waters. There is also likely going to be some BABIP regression from his .272 mark, especially (again) pitching in Colorado, which inflates BABIP. Still, he deserved a bump up from the murky nether regions of the list to the Stream Zone.

The blueprint for success for Odorizzi is to paint the top of the zone with his heater and get whiffs at and below the bottom of the strike zone with the splitter. His splitter has earned a 30.8% whiff rate so far. It also has a -8 degree launch angle as batters beat it into the ground. His stuff is more geared towards ground balls and pop-ups than strikeouts. That limits his fantasy ceiling. However, pitching for the Astros should net him plenty of Win opportunities now that he’s stretched out and tossing 5+ innings regularly. 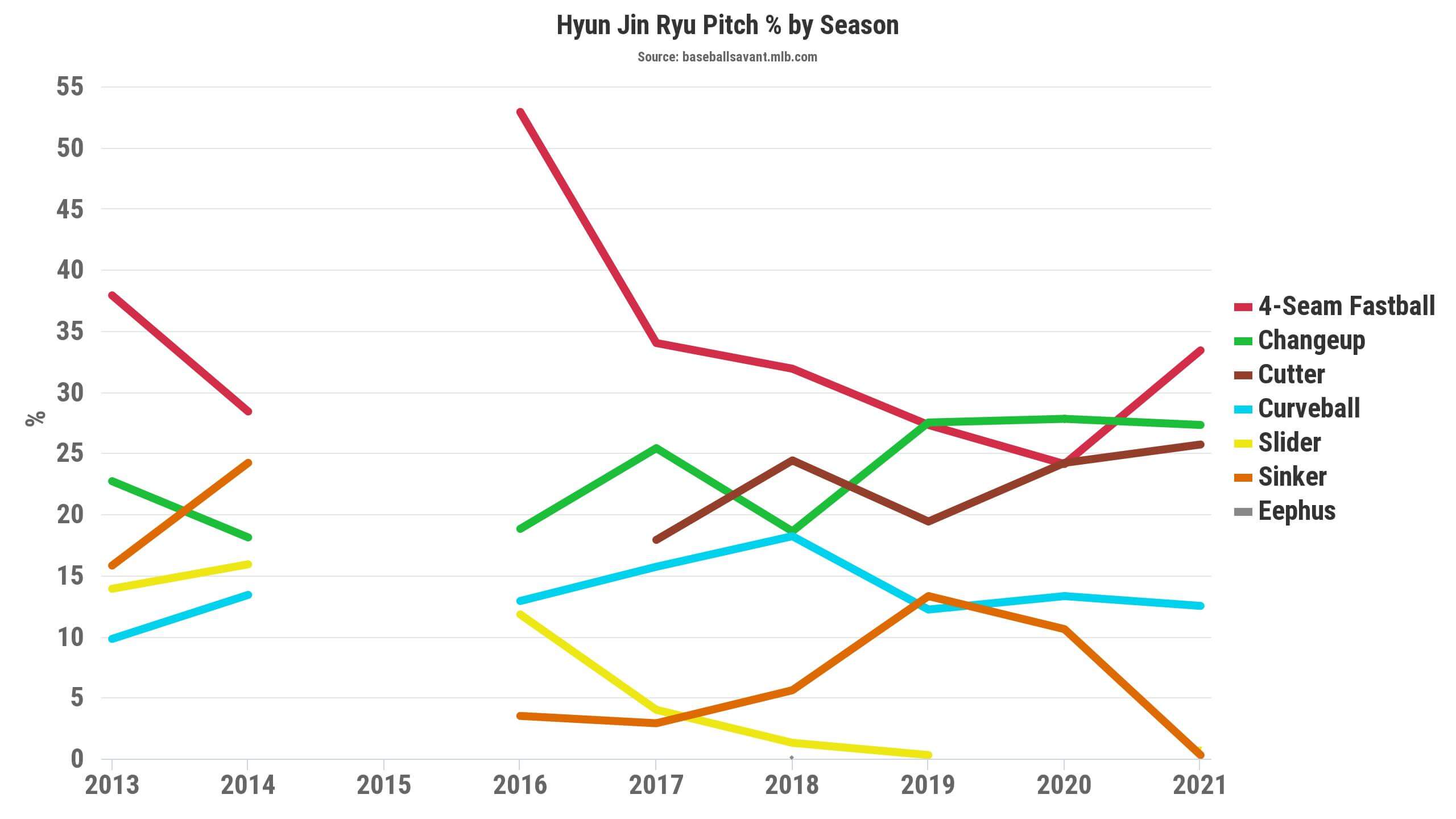 Ryu has ditched his sinker for purely four-seamers in 2021. He’s also using fewer fastballs than ever before, at 33.4%. This hasn’t helped his swinging strike rate, which is still down 2.1%. The biggest issue has been with Ryu’s changeup. The whiff rate on the change has dissipated from 30.6% last year to 19.4%, while its wOBA has risen from .222 to .332.

Let’s not simply set aside the fact that Buffalo has been a horrible place for pitchers. With the Jays eyeing a return to Rogers Centre later this summer, Ryu could enjoy a better second half. That won’t fix his changeup, but it could help his 15.2% HR/FB rate return to his career average 11.8%.

Rich Hill, TB (-18) – It wasn’t long ago that Hill was featured in the biggest risers here. Well, Hill has been one of the biggest spin rate decliners following the sticky substance ban. When you take away his biggest weapon (nearly 40% usage of the curve) it turns out things don’t go super duper great. Since the start of June, Hill has tossed 29.1 IP (6 GS) with a 4.30 ERA, 1.30 WHIP, 7.7 K/9, and 3.7 BB/9. His FIP in that span is a vomit-inducing 5.65. He’s looking like a very pedestrian option the rest of the way.

Tylor Megill, NYM (SP65) – Thanks to an extensive run of injuries to the Mets pitching staff, Tylor Megill has earned a chance to start. Setting aside the fact that “Tylor” sounds an awful lot like a robot desperately trying to seem human, Megill has been strong so far. He piled up a 59:13 K:BB ratio across 40.1 innings between Double- and Triple-A before the call-up, and hasn’t stopped racking up the K’s at the MLB level either. Through 14.1 IP (3 GS) Megill has a 19:6 K:BB ratio along with a solid 3.77 ERA (4.69 FIP) and 1.12 WHIP.

Small sample caveats apply, but to this point, Megill’s changeup has earned a very sexy-time 50% whiff rate on his changeup. His slider isn’t as lethal but has still earned a 41.7% whiff rate itself. These pitches have paired well with his 94.9 MPH fastball, which he keeps more up in the zone. Control was an issue for him in the minors. It may still get him into trouble with the Mets from time to time. Still, the strikeouts should continue to be above a K per inning. That’s enough to make him an interesting streaming option the rest of the way. And imagine if deGrom gives him some tips on that slider!

Tylor Megill is sure making an impression. #LGM pic.twitter.com/8bQXeu3IsD

Mills is in the 93rd percentile in barrel% allowed. That is owed largely to his sinker, which has a .295 wOBA and -2 degree launch angle. In fact, his ground ball rate is a career-high 57.6%. There isn’t a lot of swing-and-miss here, which keeps him from being the best General Mills cereal, Cinnamon Toast Crunch. He’s more like Lucky Charms; he’ll dazzle you once in a while with a tasty rainbow marshmallow, but often leave you underwhelmed with flavorless oat shapes.