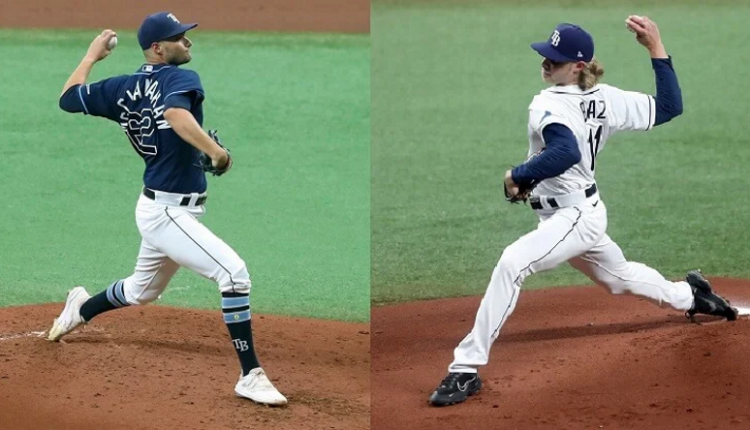 The Tampa Bay Rays have long been known for their pitching development prowess, and 2021 was no different. Despite trading Blake Snell to San Diego, losing Charlie Morton to free agency, and Tyler Glasnow to injury, the talented arms just kept coming. Both Shane McClanahan and Shane Baz made their Major League debuts in 2021, making 25 and three starts respectively. After showing just how dominant they have the potential to be, both are buzzy names entering draft season, and, of course, in dynasty leagues. But just how good can this duo of Shanes be? How should we value them in 2022 redraft leagues and longterm in dynasty leagues? That’s what I’m going to dive into today.

For those that had been following Baz through the minor leagues, you witnessed a completely different Baz in 2021. Well, not completely different. His electric stuff remained, but Baz transitioned from a “thrower” to a “pitcher” before our very eyes. So let’s call him the new and improved Baz instead.

It’s always encouraging to see steady improvements with prospects in areas where it matters. Leading up to his 2021 breakout, Baz was slowly improving both his walk and strikeout rates, but it wasn’t until 2021 that those gains went from minor to significant.

In the early stages of the COVID pandemic back in April 2020, I had a chance to interview Shane Baz along with my former podcast cohosts Jake Devereaux and Jesse Roche. This is 12 months before his 2021 breakout occurred. Baz was a terrific interview and one area of his game that he mentioned putting a focus on improving was his command and strike-throwing. Both of those were areas that hindered Baz in the past, never letting him fully utilize his electric and dynamic arsenal. Well, let’s just say that Baz was a man of his word.

Shane Baz with the 100mph fastball for the strikeout. Sitting 98-99 with life. Slider has been 89-92, easily plus. Developing into one of the best pitching prospects in baseball.#MiLB #RaysUp #Rays pic.twitter.com/KBL9XZwMrK

Entering the 2021 season, Baz had a career 11.6% walk rate in 157.1 minor league innings, never posting a single-season walk rate lower than 10.8%. His hard work during the pandemic and lost 2020 season really paid off as he dropped that walk rate to a stellar 4.4% in 78.2 minor league innings and 6.1% in his three MLB starts to end the season. All of this while still maintaining his elite bat missing abilities.

It all starts with Baz’s dominant heater. Baz averaged 97 mph on his four-seamer with Tampa Bay down the stretch and has hit triple-digits numerous times in the past, exploding on hitters as it crosses the plate. Improved command of the pitch has pushed it from “very good” to truly elite and hitters registered only a .143 BAA and .273 wOBA with a 30.4% whiff rate, 15.5% SwStr, and 33.3% CSW. It’s an incredibly small sample size, but just shows how dominant Baz’s fastball has the potential to be.

As much as I love Baz’s heater, his gyro slider might be even better. Opposing hitters could only muster a .077 BAA and .193 wOBA on Baz’s slider last season while whiffing 40.7% of the time. Baz throws the pitch in the mid to upper-80’s (86.7 mph AVG) and recorded an elite 26.2% swinging strike rate with the pitch last season. Here’s one of those sliders followed by some high cheese, making some guy named Vladimir Guerrero Jr look downright foolish.

He's going to be a problem. pic.twitter.com/NtyCIeoOLd

While both his four-seamer and slider can be considered 70-grade offerings, his dominating arsenal doesn’t stop there. Baz will also mix in a plus curveball and an above-average changeup, just for fun. That curveball registered a whopping 50% whiff rate in his three Major League starts last season with an 18.9% swinging-strike rate and 35.1% CSW.

In the end, even though we’re talking about a small sample size with Tampa Bay, that strikeout rate isn’t far off from what we can expect from Baz moving forward. When you can command four above-average or better pitches as he can, a lofty strikeout rate is sure to follow. Some might hold back a bit, wondering if the command and control gains will stick in 2022 and beyond. Don’t you be one of those people. If you wind up falling into that group, you’re going to miss out on having one of the best pitchers in the game on your fantasy squad for years to come.

For 2022 leagues, the main issue regarding the value of Shane Baz surrounds the workload limitations. This will be his first full season coming off a year where he combined for 92 innings between the Minors and Majors (Plus Team USA stint). In general, we can’t expect a major innings increase, especially when the pitcher throws on a Tampa Bay Rays uniform. However, Baz doesn’t need 150+ innings to finish as a top-15 arm. Freddy Peralta was a top-15 arm in 2021 with 144.1 innings of work which isn’t an unrealistic level for Baz to reach in 2022. Even in the 130-140 inning level, Baz’s elite strikeout potential coupled with low ratios could get him into that range, or close to it. And for an arm being taken as the 39th pitcher on average on both NFBC and Fantrax, that’s an investment I’m willing to make all damn day.

In the dynasty world, Baz should be valued even higher. He’s already a top-100 player in my eyes with the skills to rise much, much higher. We’re talking about a potential annual top-10 arm with the upside to get up into the Alcantara/Urias/Peralta tier and maybe even into the Buehler/Woodruff level. Baz is that talented. The price tag is going to be robust, but it’s worth buying high on Baz right now as the price will likely be exponentially higher next offseason.

In a year with several pitching prospects debuting brightly, Shane McClanahan’s star glistened brighter than most. In 25 starts for the Rays, McClanahan posted a 3.43 ERA, 1.27 WHIP, 7.2% walk rate, and a 27.3% strikeout rate. That’s a great rookie showing in general, but becomes even more impressive when you factor in his competition in the American League East. Nine of McClanahan’s 25 starts came against the Red Sox, Yankees, or Blue Jays with one more coming against the loaded White Sox. His ERA in those 10 starts was a respectable 3.78. However, that mark is a tad inflated by his 5.84 ERA against the Yankees in a trio of outings.

McClanahan works with a four-pitch mix, beginning with his mid to upper-90’s fastball. But as we’ve seen countless times previously, velocity isn’t everything. Despite averaging 96.5 mph with his four-seamer last season, McClanahan’s poor command of the pitch led to some rough results, including a .308 BAA, .500 SLG, and .378 wOBA with expected metrics even higher. Out of his 798 four-seamers thrown in 2021, 34.8% of them were over the heart of the plate which resulted in a .333 BAA, .566 SLG, and .380 wOBA.

As for his trio of secondaries, the results were more impressive. McClanahan was 0.1% away from joining Corbin Burnes and Dylan Cease as the only pitchers in baseball with three different pitches registering a whiff rate above 40%. Both breaking balls were especially dominant.

Those two offerings along with his changeup helped McClanahan post the 8th best swinging-strike rate and 6th best CSW rate at 14.8% and 31.5% respectively. The only other pitchers to reach 14% and 31% in those two metrics were Corbin Burnes, Clayton Kershaw, Gerrit Cole, Max Scherzer, Freddy Peralta, and Kevin Gausman. That’s a pretty impressive list to be on.

As good as those two pitches were, McClanahan’s changeup actually was his top whiff rate offering at 44.8%. Although, he only threw it 8% of the time to the tune of a .393 BAA and .714 SLG. Luckily, the expected metrics were much better at .285 and .467. However, those still aren’t exactly great numbers.

McClanahan falls into the classification of a pitcher that is “control over command.” That’s not to say McClanahan has plus control, because he’s around average in that regard, registering an 8.7% walk rate in the minors and 7.2% with Tampa Bay last season. But McClanahan hurts himself more my mislocation as opposed to issuing too many free passes. That all circles back around to his fastball command.

Even with a so-so changeup as his 4th offering, McClanahan could truly ascend to the elite ranks of starting pitchers with better fastball command. He has the elite swing and miss pitches with his two breaking balls, but his four-seamer is holding him back.

Honestly, McClanahan’s profile reminds me a lot of a former Tampa Bay left-hander that won a Cy Young award a few years back. McClanahan turning into Blake Snell 2.0 wouldn’t be a bad thing. In fact, it would be a solid outcome. However, with improved fastball command and effectiveness, McClanahan could cement himself as an annual top-20 fantasy arm capable of a low-3s ERA, solid enough WHIP, and elite strikeouts.

For 2022, I have McClanahan 29th in my SP rankings, sandwiched between Frankie Montas and the aforementioned Snell. I’m basically valuing him as a less-established Jose Berrios with the potential for similar ratios but with a higher strikeout rate. For dynasty, he’s a top-25 arm as it stands now with room for growth into the top-20.

Fantrax has been one of the fastest-growing fantasy sites and we’re not stopping now. With multi-team trades, designated commissioner/league managers, and drag/drop easy click methods, Fantrax is sure to excite the serious fantasy sports fan – sign up now for a free year at Fantrax.com.