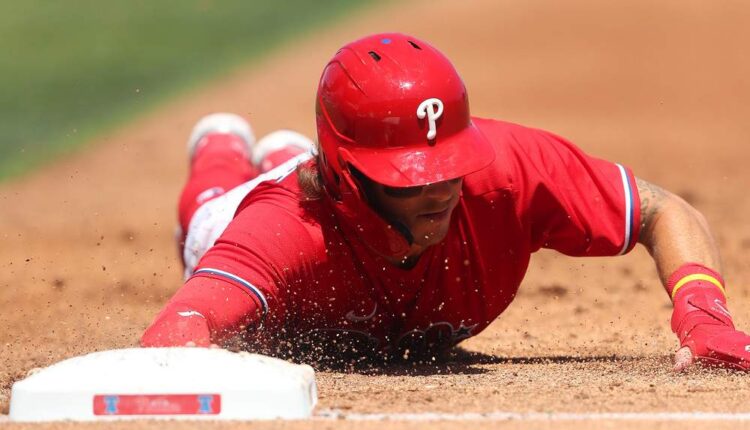 Welcome to our 2022 team top prospect rankings series. Leading up to Minor League Opening Day, Eric Cross and Chris Clegg will go through all 30 Major League organizations, continuing today with their Philadelphia Phillies Top Prospects for dynasty leagues. In each installment of this series, you’ll find the top-20 rankings from both Eric Cross (AVG) and Chris Clegg (OBP) along with one prospect each that they’re targeting heavily in dynasty leagues right now. Hopefully, these rankings will help you in your dynasty leagues, and maybe give you some new trade targets to consider.

The 21-year-old Johan Rojas began his breakout in 2021, but there’s still time to acquire him at a reasonable price in dynasty leagues before his value likely continues to rise this season. In 429 plate appearances ending in Hi-A, Rojas slashed .263/.329/.417 with 11 home runs and 34 steals.

You’ve heard me talk about how stolen base totals below DOuble-A are often inflated, but don’t let that take away from the fact that Rojas is a borderline double-plus runner that could approach or even exceed 30 steals annually in the Majors. That speed is his carrying tool, but Rojas could also provide around average game power and an above-average hit tool as well. Rojas posted an 87.5% contact rate in Lo-A and 78% in Hi-A last season. He’s shown more gap power at the moment, but there’s plus bat speed and projection for more power, especially if he adds additional bulk to his 6’1 frame.

The overall offensive package here with Rojas is exciting and could have him flirting with top-100 prospect status by the end of the 2022 season. In a system limited in high-ceiling prospects, Rojas is certainly one to target heavily in dynasty leagues.

Ethan Wilson has been underrated for most of his career. He was not a big-time recruit which led him to South Alabama where he had an excellent career. He posted a .325/.423/.588 slash with 28 home runs and 22 stolen bases in 595 carer collegiate plate appearances.

The Phillies drafted Wilson in the second round of the 2021 draft and his debut seemed like a bit of a disappointment. On the surface, Wilson posted a .656 OPS with just three home runs and two stolen bases in Low-A Clearwater. Despite posting just a .215 batting average, his contact skills did not reflect a low batting average. Wilson struck out just 21 percent of the time and had a 76.6 percent contact rate. His .253 BABIP held the batting average down and showed some bad luck.

Wilson projects to have plus power and an above-average hit tool. There is some speed, but stolen bases do not seem like a long-term play for Wilson. He is the perfect buy-low in dynasty that could pay big dividends.