Outliers: Are These Pitchers Having Late-Career Breakouts?

When a young pitcher starts to venture into uncharted territory with a new skill, fantasy owners typically don’t waste much time pursuing the player on waivers. For example, Sean Newcomb has struggled with his walk rate throughout his minor league career and during his brief time in the majors. However, as that rate has dipped over his past few starts, owners have flocked to him as he is showing signs of breaking out to a new level. We easily adopt that narrative with 24-year-olds, yet we are usually far more skeptical of buying into the notion of a late-career breakout. If a pitcher in his mid-thirties starts to carry a new-and-improved statistical profile, we readily chalk it up to a small sample.

This isn’t necessarily a bad bias to have. Last season, a 34-year-old Jason Vargas emerged out of the gates with a 1.40 ERA in April that was supported in part by higher-than-normal strikeout and ground ball rates. Most owners wisely ignored Vargas’ new profile, and in May, those rates started regression towards their norms.

Many short-term improvements for older pitchers are short-lived, like Vargas’ were, but sometimes those changes stick. In 2016, Charlie Morton began his only season with the Phillies at the age of 32, yet he threw harder than he ever had before and posted a strikeout rate that was nearly eight percentage points higher than his previous career high. However, after just four starts, Morton’s tenure as a Phillie came to a close, as he suffered a season-ending hamstring tear. Far from a fluke, though, Morton picked up where he left off last season, compiling a 26.4 percent strikeout rate in his first season as an Astro. So far in 2018, that rate has spiked even further to 32.1 percent.

Nearly two months into the season, there are three pitchers who look primed to follow in Morton’s shoes as a late-career breakout candidate. In fact, each of the three makes Morton look like a young up-and-comer, as the players featured here are all at least 35 years old.

For each of the three pitchers, I have included their ownership rates on Fantrax, and you will see that only one of them is widely available. I have identified what is different about each pitcher and the degree to which the improvements are backed up by some other change in their profile. It’s hard to know at this stage whether or not these pitchers will achieve a late-career breakout, but before you assume they are the 2018 version of Vargas, remember that they just might be this season’s Morton.

Happ is not new to this late breakout thing. As a 31-year-old, he brought his walk rate below 8.0 percent for the first time in his career. A year later, he built on that progress, dropping his walk rate even lower while boosting his strikeout rate slightly. What Happ is doing this season is making his earlier breakout look like a plateau. He has increased the swinging strike rate on his four-seamer from last season’s mark of 11.2 percent to 15.2 percent, and he’s getting more whiffs on his sinker and slider, too. Happ’s strikeout rate has exploded, and his 30.7 percent mark bests his previous high for a full season by 7.7 percentage points.

Whereas Happ achieved his 2014 breakout with a dramatic lowering of his vertical release point (see below), it’s not clear what is driving this season’s spike in strikeouts. He is not experiencing notable changes in his velocity, release point, movement or spin rate. It just may be that Happ has benefited from his early-season schedule. He has faced each of the three teams with the highest strikeout rates against lefties — the Rangers, White Sox and Mets — and he has combined for 28 strikeouts in 19.1 innings against them. Happ has also had eight strikeouts or more in starts against the Red Sox, Orioles and Royals, all of whom rank in the upper half in strikeout rate versus left-handed pitchers. 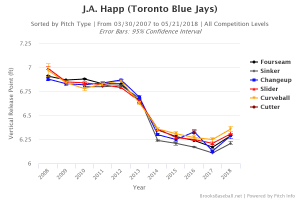 Granted, Happ will benefit from facing three divisional foes (the Red Sox, Orioles and Rays) that are not averse to striking out against lefties, but he has had a disproportionately favorable schedule so far. In light of any other plausible explanation, there is good reason to doubt that Happ is undergoing a late-career breakout. Should the lefty regress, he should still be a useful pitcher, but it might be a good time to put him on the trade market, because his value may never be this high again.

It’s been years since Sabathia has thrown in the mid-90s, but through his first eight starts of 2018, he is putting up an ERA and WHIP that harken back to his heyday. He owes his 2.40 ERA and 1.09 WHIP not to strikeouts, but to a career-high 35.4 percent chase rate and a spike in soft flyball contact. The former is not far off the marks he set earlier in this decade, but the latter is nearly unprecedented for him. Of pitchers who have allowed at least 40 flyballs this season, only Jake Odorizzi has topped Sabathia’s soft flyball rate of 32.6 percent. Prior to this season, his career soft flyball rate was 22.0 percent, and only once before had he topped 30.0 percent in a season.

Sabathia’s sinker has been key to his improvement, as he is getting more grounders and fewer line drives with it. Last season, batters hit the pitch for a .190 Iso and a .312 BABIP, but this year, those marks have fallen to .077 and .190, respectively. While it’s not clear why he has had more success with the pitch, he has been less consistent in where he is locating it this season than he was last year, which may be keeping hitters off balance. Brian Dozier, after going 0-for-3 against Sabathia back in April, noted as much. Perhaps as a result of weak contact, Sabathia has allowed an overall BABIP of .250. His xBABIP is actually eight points lower, suggesting that his performance to date is not a fluke.

The past three seasons have been dreadful for Shields from both a real-world and fantasy perspective, but we may be witnessing the beginning of a resurgence. In his four May outings, Shields has recorded three quality starts and allowed only three extra-base hits. He has a 3.46 ERA for the month, and his 21 strikeouts and eight walks over 26 innings are respectable ratios.

It’s not advisable to expect Shields to maintain those strikeout and walk rates on the basis of four starts, but the avoidance of extra-base hits is something we have been seeing from him all season long. After having allowed hitters to amass an Iso of .224 over the course of the previous three seasons, they have mustered just a .106 Iso so far in 2018.

Best of all, there’s a plausible explanation. For the first time in his career, Shields is allowing pulled flyballs at an extremely low rate. His pulled flyball rate of 16.4 percent is the 12th-lowest in the majors (min. 40 flyballs), and it stands in stark contrast with his prior career rate of 27.8 percent and his previous low of 23.8 percent.

While it’s admittedly a risky move, I picked up Shields in TGFBI for $0 in FAAB and put him in my rotation in place of Jon Lester, who has a single scheduled start against an Indians team that hits lefties well. Shields has a scheduled start against the Tigers, who rank second-to-last in home run-to-flyball ratio against righties, and a start against the Orioles, who have a middle-of-the-pack offense against right-handed pitchers. (This swap will be included as a part of my season-long study of streaming two-start pitchers.) I may not have made this move if I were near the top of the standings, but since I entered the week in 10th place out of 15 teams, I am taking a few more risks. Even if you’re not inclined to start Shields yet, it’s best to add him in deeper leagues now, as it will be more expensive to add him later, should he continue to have success.