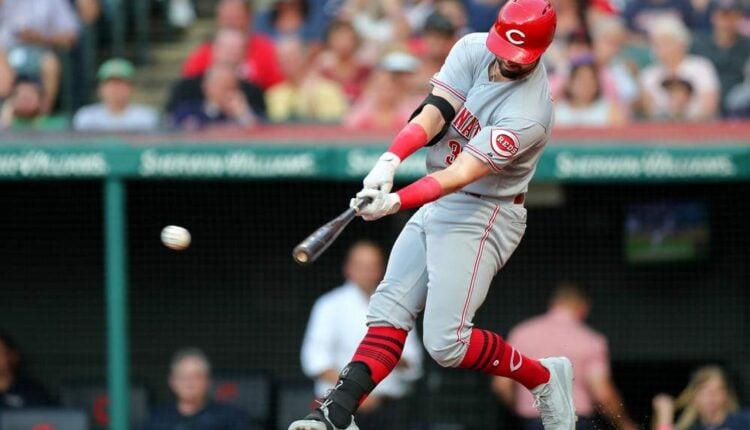 This is it… the final piece in my points league sleepers and busts for hitters! If you are not familiar with the previous columns (I mean… how are you not by now?!?) I wrote about every position and how you can use Batter K-BB rate to find sleepers. I also address the other aspects that makes a good points league hitter, such as those who hit a lot of doubles, who walk a lot and limit strikeouts (as you know already), and those who give you a solid amount of Runs+RBI, as you get a point for either, so you don’t have to worry about each individual category. To me, 160 is a baseline I like to set, meaning you get on average 80 runs and RBI, but again, if its 100 RBI and 60 runs, who cares! The total number is what we worry about.

With outfield being so deep, I wanted to give you two parts! The first are more higher end names, with this section being deeper names!

Jesse Winker is a player I wish was guaranteed a starting job. He would be one of my favorite points league sleepers if so. He had the lowest Batter K-BB rate amongst all outfielders at -0.9 percent. In fact, he was one of just five players with a negative Batter K-BB rate (remember the lower the better). Along with that great eye, Winker also hits for average, hits lots of doubles (16 in 334 PA in 2018) and possess some pop. He would be a prime points league value (like Nick Markakis in Pt. 1). However, with Yasiel Puig and Matt Kemp in the corners and potentially Nick Senzel in center, playing time is a legit concern for Winker. Still, if you play in points leagues Winker is a name to remember, as he likely will go undrafted. But if an injury was to occur, or if the Reds try him in center, pounce!

Brett Gardner was a player that I was banging the points league tables for last season. I would be lying if I said that Gardner did not let me down last year. However, because of that he is likely going undrafted in anything outside of best ball or draft and hold leagues. He is currently the 83rd outfielder off the board, at pick 341.83 overall, according to Fantrax ADP. Despite the fact that he saw decreases across the board, he still was very strong in his plate discipline. Even in his down 2018 season he had a 6.9 percent Batter K-BB rate. He should play against righties and lead off in that Yankees lineup. Perhaps he is done. But perhaps he can bounce back. It costs next to nothing to find out.

Jay Bruce is much like Gardner. I thought he would be a value in points leagues due to Roto Bias. Prior to 2018, Bruce was the definition of a volume player and while that can get overlooked in Roto, as players chase upside. However, in points, much like in Fantasy Football, volume is king! Bruce had a miserable 2018 that was plagued by injury, most notably plantar fasciitis, which as we learned with Albert Pujols and Corey Dickerson in the past, can have a huge impact. Yet, there was one positive takeaway from Bruce last year: his plate discipline continued to improve. Last year he had a career-high walk rate (11.4 percent) and the second lowest strikeout rate of his career (20.8 percent). All in all he had a 9.4 percent Batter K-BB rate. Going outside the top 300 on Fantrax, you don’t have to invest much to bet on a bounceback year.

Joc Pederson is a lot like Winker in a sense. I am a sucker for his ability, but playing time concerns make it difficult to trust. He is currently expected to be on the heavy side of a platoon in left field, which is far from ideal in points. Still, there is a lot to like with Joc. He continued to cut his strikeout rate for a third straight season, down to a career-low 19.2 percent. I do not love the walk rate dropping but will take the 10.2 percent Batter K-BB rate. Just note that the upside if his walk rate bounces back. He has also hit 25 homers in three of the last four seasons. Hopefully, the Dodgers trade Joc to a team that allows him to play everyday (would hurt ratios which affects Roto negatively, but the volume helps in points).

Corey Dickerson had a strange 2018 season. He saw major power decreases but still hit .300 and saw his strikeout rate drop to by far a new career low at 15 percent. He walked way too little at 3.9 percent, but his 11.1 percent Batter K-BB rate still gets the job done. The hope is that the strikeout rate can remain below 20 percent, while the power bounces back. Dickerson hit 24-plud homers in the two prior seasons, so it is not too much to ask. He is a decent fall back option at the outfield position.

Stephen Piscotty is more high-end than the names listed above, but I wanted to make sure I included him. Piscotty had a strong 2018 hitting 27 homers, eclipsing 160 Runs+RBI, and lowering his strikeout rate to a career low 18.8 percent. Oddly enough, he had a career low walk rate as well (6.9 percent). Still he had a 11.9 percent Batter K-BB rate. He is not exciting by any stretch, but he is a reliable option that you can nab with the 147th overall pick. While I do like him in Roto, I like him even more in points.

Eric Thames has an intriguing skillset, but trust me you want no part of him in points leagues. He provides a lot of power, but sadly, not much else. First of all, where does he play in 2019? He will not play over Jesus Aguilar. The only spot for him perhaps is in a platoon with Ryan Braun? Otherwise, he is a bench bat that could get in a handful of games a week, which does you no good. Add in the fact that he has had a 29 percent or higher strikeout rate the past two seasons. Hard pass.

Domingo Santana is a player I was happy to see freed and given a chance to play. But that is more for Roto formats. After what was really a lost season for Santana, he will man left field for the Mariners. In limited action last year he had a 24.3 percent Batter K-BB rate. There could be room for improvement as he had a career-low walk rate in limited action but has had a strikeout rate over 29 percent in each of the last two seasons. Additionally, Domingo has had a fly-ball rate below 30 percent in four straight seasons, but due to his friendly park was able to sustain a high HR/FB rate. I trust that significantly less in Seattle.

Teoscar Hernandez has some pop and he showcased his speed in the minors. However, he may end up in a platoon as he hit .213 against lefties, but I feel pretty confident he will see close to everyday at-bats on the Blue Jays. While he was an exciting waiver option in 2018, you should save those fliers on him for any Roto leagues you play in. He is a free swinger and struck out 31.2 percent of the time in 2018, on his way to a 23.4 Batter K-BB rate. Yeah, pass in points.

Harrison Bader is projected to be the starting center fielder for the Cardinals. Last year he hit .264 in 427 plate appearances. But he only hit 13 homers and had a .158 ISO. To have him on your team you would have to take him as the 39th outfielder off the board and that is strictly because he stole 15 bases last year. Roto Bias once again pushes a player up the draft board!  Add in that Bader had a 22 percent Batter K-BB rate, behind an entirely too high 29.3 percent strikeout rate. Yeah, once again, hard pass in points, especially at his price.

Randall Grichuk is a player you have likely seen me tweet about over the years. I mean he has a destroyed of baseballs. He has a 38.9 percent career hard-hit rate, but his career-low was in 2018 (36.4 percent) and a career 44 percent fly-ball rate. He has ranked inside the Top 10 in Brls/PA% in each of the past two seasons. However, he is a flier to be best left for Roto. He is a free swinger and had a 20.6 percent Batter K-BB rate in 2018. He is always going to strikeout too much to be worthy of rostering in points leagues.

Have you been enjoying Michael’s Points League Sleepers series? For more great rankings, strategy, and analysis check out the 2019 FantraxHQ Fantasy Baseball Draft Kit. We’ll be adding more content from now right up until Opening Day!