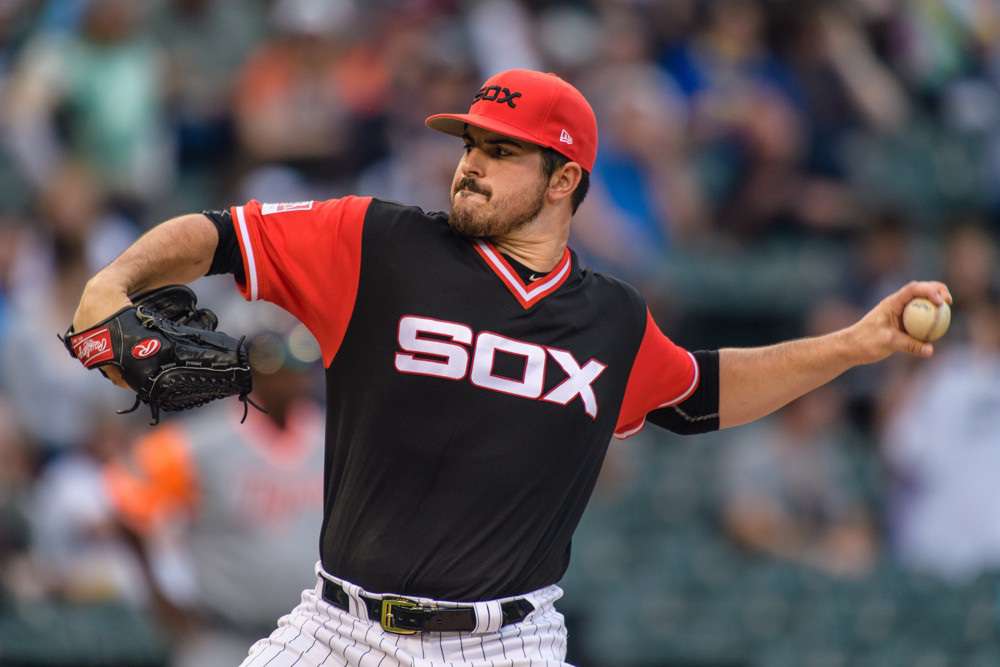 Spring training is here! Meaningful pro baseball is still a month away, but draft season is fast-approaching. With that in mind, I’ll put to bed my offseason player profiles and switch to some quicker hits for owners to consider as draft day approaches. Today we’ll look at a few potential breakout starting pitchers I like for the coming season.

Last year at this time, I was bullish on Blake Snell, noting that his strong second half in 2017 set him up as a deep-league breakout. At the time, he was being drafted 60th on average among starting pitchers, behind Cole Hamels and Lance Lynn. No one could’ve forecasted the season Snell had, but he was outside the top 50 despite promising results and top-notch stuff. (Full disclosure: along with my optimism on Snell, Christian Yelich and Stephen Piscotty came positive forecasts on Josh Harrison, Ian Kinsler and Wilmer Flores). Setting aside our current top 50 starters by average draft position, who might the next ace-in-waiting? Here’s five young pitchers (age-28 or younger) currently underappreciated by fantasy owners for the 2019 season.

The time is now! Fantasy Baseball leagues are already forming at Fantrax.com, so head on over and start or join a league today.

What’s there that hasn’t been said about Gray already? He’s coming off a 5.12 ERA that no one feels is indicative of his true talent. The projections are rather optimistic, with Gray’s projected ERA’s on Fangraphs ranging from 3.91 to 4.19. Each system forecasts around a strikeout per inning. For as wild as Gray’s results have been, consider his year-by-year xwOBA against, from Baseball Savant: .306, .308, .304, .304. xwOBA isn’t a perfect stat, especially for pitchers, but Gray’s strikeouts, walks, and batted balls allowed weren’t drastically different last year than they had been previously. It’s not clear that Gray was any worse, even if his numbers were. He narrowly set a career-high in swinging strike rate, and he still sits mid-90’s with a wipeout slider. If you’re targeting upside at the back end of drafts, it’s tough to find more upside around pick 200 than Gray offers.

Kikuchi isn’t going to throw 200 innings, as the Mariners have announced plans to keep him on a modified schedule to avoid overworking him in his debut season coming over from Japan. There’s a chance that limited workload might help him retain his stuff from Japan, though, and we know the stuff’s real. Fangraphs’ Eric Longenhagen and Kiley McDaniel lauded Kikuchi’s repertoire in calling him an MLB-ready mid-rotation starter, and at least one projection system (Derek Carty’s The Bat) thinks his rate performance will be similar to Mike Foltynewicz’s. There’s no guarantee Kikuchi stays healthy given his injury history, but we’ve seen pitchers exceed expectations coming over from NPB in recent years. There’s no doubt Kikuchi has MLB-caliber stuff and athleticism.

Rodon’s performance went backward last year, but he actually made some strides against right-handed hitters. Bizarrely, he got blasted by lefties, but leaning on his slider more could be the cure to his ills. Per Brooks Baseball, Rodon raised his arm slot last season and got more depth on his slider than ever before, and it got plus results. Opposing hitters made contact on only 60% of their swings against Rodon’s slider, making it easily his best swing-and-miss pitch. Nevertheless, he only used it around a quarter of the time, relying on a more traditional, fastball-heavy approach.

Still, we’ve seen pitchers like Patrick Corbin and Lance McCullers dominate after upping their usage of a plus breaking ball. Maybe the White Sox don’t want to go down that path given Rodon’s health history, but the slider was a big reason they took him third overall in the first place. With Chicago needing to sort through its volume of talented yet underperforming starters as they near the end of their rebuild, it’s time for Rodon to show up.

The Royals aren’t interesting, so Junis’ second-half performance might have flown a bit under-the-radar. He’s worth mentioning, though. After the All-Star Break, Junis pitched to a 3.35 ERA with a strong 18-point gap between his strikeout and walk rates. Most importantly, Junis’ HR/9 rate fell from an unplayable 2.12 to a stellar 0.96, with a corresponding uptick in ground balls to show for it. To some extent, the explanation seems simple. From Brooks Baseball, Junis’ average vertical pitch heights by month. 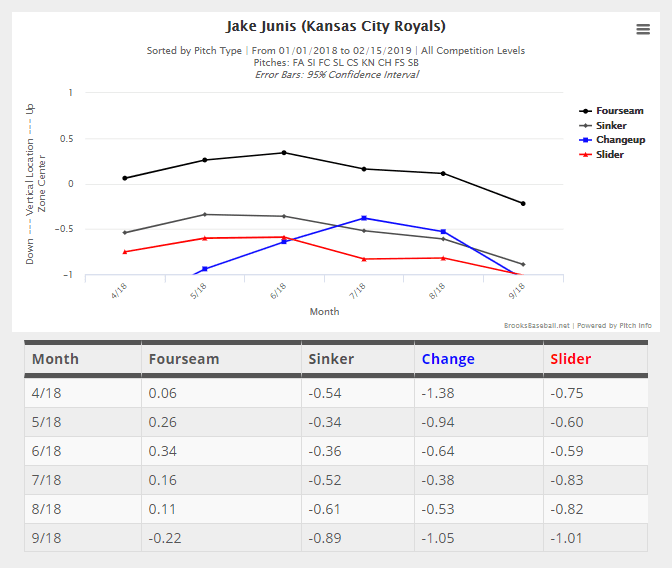 Junis consistently worked lower in the zone as the year went along, and he got lower contact to show for it. It’s a bit of a traditional approach, one most teams have eschewed in the wake of hitters adopting an uphill swing path. Still, the airborne contact tends to be on pitches up. Targeting the bottom of the strike zone is still the play for ground balls, even if it lacks the sexy, swing-and-miss flare the high-spin, elevated fastball offers. Junis doesn’t have knockout stuff, so his upside isn’t quite as high as the other pitchers on this list, but he could be a reliable mid-rotation guy next year. He’s got a higher floor than you’ll typically find outside the top 75 starters.

This one is admittedly a stretch, based more on conjecture than statistical track record. Bundy has always given up dingers in bunches, and his career 4.63 ERA and 4.76 FIP suggest he’s closer to falling off a big-league roster than being a top-end starter. Still, there are some things in here to like. Despite lukewarm velocity, Bundy’s got 86th percentile fastball spin, per Statcast. He’s also got a rare five-pitch mix with a plus-plus slider. There’s raw material in here.

Most importantly for Bundy optimists, though, the Orioles have undergone a massive transformation this offseason. Their previous regime, led by Dan Duquette and Buck Showalter, is gone, replaced by Mike Elias as GM and Brandon Hyde as manager. The addition of Elias, the former Astros AGM, is especially noteworthy. Houston has been ahead of the curve in pitcher development over the years, while Baltimore has…well, not. Many of the Orioles’ top pitching prospects in recent years have flamed out, arguably including Bundy himself.

Even more damning than the Orioles’ subpar results are comments made by Zach Britton after a midseason trade from Baltimore to the Yankees. Britton called out his former organization for not communicating analytics to their pitchers last October. Elias and Hyde, though, come from heavy analytical organizations. Maybe they can figure out a way to better translate Bundy’s raw materials into results. Heaven knows they’re more equipped than the last regime.

You buying in on any of Anthony’s breakout starting pitchers? For more great rankings, strategy, and analysis check out the 2019 FantraxHQ Fantasy Baseball Draft Kit. We’ll be adding more content from now right up until Opening Day!