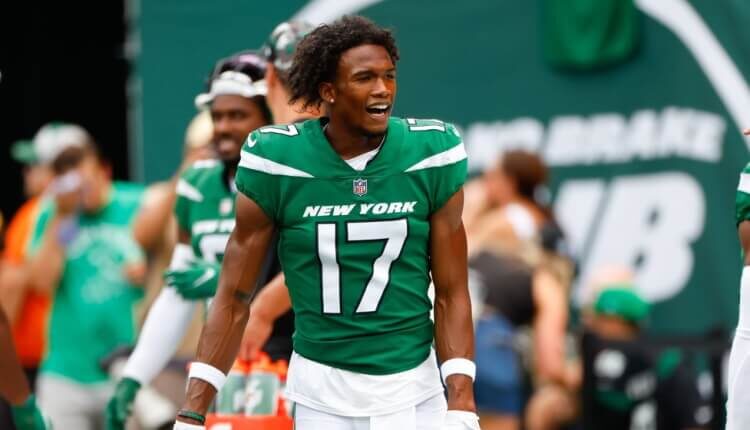 We’ve made it through two weeks of football already and we’re finally starting to collect some of the data points we need to make smart decisions. It’s virtually impossible to watch every second of every game, so naturally there are things that you might miss from week to week. This article aims to name mostly under-the-radar, mid-tier, but fantasy relevant players that are trending up or trending down. You’ll never see me mention that Cooper Kupp is trending up because that’s a headline you can read just about anywhere. You’ll also never see me slap a player like Matt Breida with a “trending down” label, because (with all due respect) who cares?

What else can I say? The rookie looks like the clear-cut WR1 on this team. At least that should be the case for as long as Joe Flacco is under center. It is possible that this dynamic changes when Zach Wilson returns. Wilson has been targeted 22 times in his first two games and saw his snap count increase 10% in Week 2. With Flacco running the show many predicted a slow start for Wilson, but that does not seem to be the case. Against the odds, Garrett Wilson is trending up! The 22-year-old has already racked up 154 yards on 12 catches. Wilson will look to continue his ascent when the Jets travel to Cincinnati on Sunday.

Who? Yup, that Richie James. You remember. The one who was the WR4 or 5 on the 49ers. Well, he looks like he’s finally found his stride with the New York Giants. The off-season shone a spotlight on the rookie Wan’dale Robinson and the ghost of  Kenny Golladay, however it’s been all Sterling Shepard and Richie James. Daniel Jones’ quarterback play is streaky at best, so only time will tell if James can continue his good start, but he appears to be a reliable target. James has reeled in 10 passes for 110 yards on 12 targets. Those 12 targets are second only to Shepard. Keep an eye on Richie James Jr., who is trending in the right direction.

The QB10 through the first two weeks of the season, Jared Goff looks much improved from the 2021 season that saw him throw for 3,245 yards and only 19 touchdowns. Goff can seemingly do no wrong, earning a 121.7 passer rating in last week’s game against the Commanders. The offensive line looks great, the receivers are getting open, and the running game seems to be working. Sporting a rather impressive 6:1 touchdown to interception ratio, Goff gets his shot to stay hot this week against a suspect Minneapolis secondary.

If you’ve ever had Amari Cooper on your fantasy team then you know not to expect much from him the week after he actually pops off. That goes triple on a short week. But against all odds, Cooper who went 9-101-1 on 10 targets in Week 2 mirrored that production with a 7-101-1 line on Thursday Night Football. After only catching three balls for 17 yards in Week 1, it appears that Cooper has righted the ship and is now a weekly top 12 WR candidate.

It would have been nice if Penny could have started this season the way he ended last season. Given his ADP, he would have been the steal of the draft. Alas, that is not the case. Penny had a mediocre game one, rushing for 60 yards on 12 carries and catching two passes for an additional seven yards. In Week 2 he saw his rushing attempts cut in half along with his snap count. You can thank Kenny Walker for that. This backfield looks to be a 60-40 split early on, which is not what Penny drafters had in mind when they took him.

Robert Woods is not the impactful player on the Titans that he was with the Rams. He is trending down for one huge reason; his new QB clearly prefers his new rookie weapons over the veteran. Through two games Woods has 7 targets, while Treylon Burks and Kyle Phillips have 11 and 10 targets respectively. On a team that runs the ball as heavily as the Titans do, volume in the passing game is key. Bobby Trees just doesn’t have that here in Tennessee. Woods will enter his Week 3 matchup versus the Raiders with just 5 catches and 52 yards to his name.

Thus far it has been tough sledding for the G.O.A.T. As of now, Brady has only thrown a pair of touchdowns, while also tossing one interception. His main problem right now is the health/status of his receivers. His main target, Mike Evans got himself tossed out of the last game and suspended for the next. Chris Godwin still looks to be a ways away from full health, while Breshad Perriman and Russell Gage are tending to aches of their own. The team is so desperate for WR help that they’ve recruited Cole Beasley to the squad and have hopes that he’ll be ready this week. If his WR health wasn’t enough, Brady has been tending to a finger injury that caused him to pop up on the injury report this week. Brady is trending down and it could be a while before that arrow points in a new direction.

If you thought you were getting a top-five TE when you drafted Pitts, it’s time to think again. This offense barely has room for one person to eat each week. Through two weeks, it hasn’t been Pitts’ turn yet. The offense has been moving through Drake London and Cordarrelle Patterson. It is really disappointing because Kyle has been on the field consistently to start the season. He played 84% of snaps in Week 1 and 93% last week. All of that time on the field has only produced two identical 2-19-0 stat lines. That is just not going to get it done. Kyle Pitts is trending way down and is beginning to look like a fantasy draft bust.