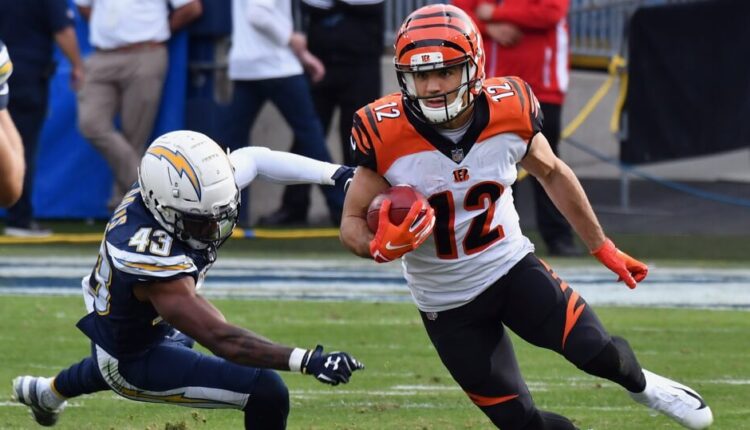 As we move into the third week of the preseason for most teams, we go around the AFC to examine the latest news, updates and trends from Fantasy Football perspectives. Here is the latest NFL Preseason Fantasy Report, focusing on the AFC training camps and exhibition game impacts.

Baltimore: In addition to improving his passing, Lamar Jackson has been working on improving his ball security, according to the team’s official website. He fumbled 12 times during the regular season and three more times in a playoff loss. That’s not good for a guy who started just seven regular-season games. The team as a whole has worked on the issue and Jackson can only be more of an appealing Fantasy QB2 If he curbs those mistakes.

Buffalo: The Sporting News recently broke down how the former Panthers brass in Buffalo is modeling the upbringing of Josh Allen after how Cam Newton was developed. Allen is certainly a dynamic runner, as Newton was earlier in his career, and the two continued to draw comparisons after recent joint practices. He may even have a stronger arm than Newton, but Allen is struggling with accuracy, a factor that may prevent his true ascension to a Fantasy QB1 this year.

Cincinnati: With A.J. Green out and Tyler Boyd and John Ross likely commanding most of the secondary attention early in the season, there could be some opportunities for Alex Erickson to contribute out of the slot. He is a crafty route runner who could help Andy Dalton move the sticks on key downs, and is worth a deep late flier in PPR leagues, or should be on your Watch List. He could come out of the NFL Preseason and start the regular campaign off well.

Cleveland: Nick Chubb has been impressive throughout camp and expectations are high for him as the regular season approaches. With no significant competition for carries throughout the first half of the season, he should be a workhorse as expected. The team’s official site has noted his improved patience and RBs coach Stump Mitchell has hinted about getting him more involved in the passing game. More receptions may or may not be in the outlook for Chubb, but it’s also Kareem Hunt’s best way of getting playing time later in the season. With Duke Johnson gone, though, the pass-catching opportunities may be there for Chubb earlier in the season. Chubb will have to prove that he can be more versatile, and if he does that can only increase his appeal and leave Hunt as a change of pace guy when he comes back.

Denver: Emmanuel Sanders has looked good and is saying all the right things in the NFL Preseason. Just eight months after suffering an Achilles tear, he had a 19-yard run and a 45-yard catch that was nullified on a penalty Monday. That outing should boost his Fantasy stock again, but he is four months ahead of schedule in his recovery and is in danger of suffering a compensatory injury at any time.

Houston: Will Fuller told ESPN he needs to prove himself over a full season. Fantasy owners would agree. He worked through rehabbing from a torn ACL during the offseason, but WRs coach John Perry also noted Fuller has improved strength to make contested catches and work through contact. But Fantasy players may have to endure through a slow start and some inconsistency as Fuller may need some more time to fully regain his best form.

Indianapolis: It may be at least a week before Andrew Luck practices again in the NFL Preseason, and he is in real danger of missing the regular-season opener. Jacoby Brissett is one of the better backup QBs in the league and can keep the offense operating respectably. The Colts have a lot of weapons on offense and Brissett could perform better than he did in 2017 if needed to start any games. T.Y. Hilton and Marlon Mack should still be quality Fantasy starters with Brissett leading the offense.

Jacksonville: ESPN recently noted that D.J. Chark has been the most impressive receiver in Jaguars camp, as he has absorbed more of the playbook and may be set to progress more in his second season. Chark is a late flier to consider, especially in deeper drafts. He could possibly emerge as the team’s best downfield playmaker this season.

Kansas City: Now that speculation about a real committee has vanished, it is clear that Damien Williams remains the lead RB here. Rookie Darwin Thompson has enjoyed an impressive NFL Preseason and could emerge as his top complement. But he is still going to be the overall understudy for Williams. Meanwhile, Carlos Hyde is being left off some final roster projections. He could conceivably land on a team in need of RB depth if he does not make Kansas City’s final roster.

Los Angeles Chargers: No one has missed it, but there are now reports that Melvin Gordon’s holdout will likely extend into the regular season. Austin Ekeler is the presumed starter in the meantime, but he may have to perform better than he did last year in the role to hold off Justin Jackson. In his first start last season he totaled just 68 yards from scrimmage. His second start produced 43 scrimmage yards. His third start was better, with 94 rushing yards. But he only scored once in those three games. Ekeler must show he can shine more with an expanded workload or Jackson could really push him for playing time.

Miami: Head coach Brian Flores indicated to the media this week that Josh Rosen may not be ready to open the season as the starting QB. Observing Rosen’s erratic play in the NFL Preseason, that is no surprise. Fantasy players well know how Ryan Fitzpatrick can spark a passing game at any time. He can also make a defense look really good. But his presence as the starter could make Kenny Stills, Albert Wilson and maybe even Jakeem Grant more useful than expected, and all can be nifty DFS plays when the matchup is right.

New England: Damien Harris is looking good this preseason, and is a necessary handcuff to Sony Michel. During last year’s NFL playoffs Michel showed he could play at an RB1 level if needed. But his checkered history of knee issues will likely mean he misses more playing time this season, and if and when he does, Harris will become a hot Fantasy play. Reach sooner for Harris than the final rounds if you draft Michel in the fifth or sixth round.

New York Jets: As outlined in a recent NFL Preseason report from longtime Jets beat writer Rich Cimini, Jamison Crowder may be set for a busy year out of the slot. Crowder studied film of Adam Gase’s offense during the offseason, He was brought in to help improve the Jets short passing game and slot receivers have been very successful in past Gase attacks. Crowder should be drafted as a Fantasy WR 4 in PPR leagues, and he has the potential to be a Fantasy starter this year as Sam Darnold peppers him often.

Oakland Raiders: Darren Waller has been dealing with a shoulder injury, but should be ready for the regular season. The TE has been creating a stir in camp when available and appears set to replace Jared Cook as the top target at the position. But with Antonio Brown, Tyrell Williams and even Josh Jacobs involved in the passing game now, Waller may not be dependable for Fantasy purposes right away. Of course, so many players at the position are unreliable, so Waller is worth the TE2 flier for possible upside. He can also emerge as another weapon to further deepen Derek Carr’s best supporting cast yet. With the deepest crew of playmakers around him yet, Carr has Fantasy sleeper potential for 2019.

Pittsburgh: Donte Moncrief had a good camp and published reports indicated he was likely to open the season as the No. 2 WR for Pittsburgh. But he lost a fumble in the team’s most recent NFL Preseason Game while James Washington stood out again, with four catches for 78 yards. Moncrief and Washington could conceivably complement each other, with the former as the big target and the latter as a field-stretcher. But if Moncrief starts the season slowly, he could find himself behind Washington for targets quickly. Ben Roethlisberger will certainly take to a downfield playmaker with big-play ability if Washington can continue to perform well when play begins for real.

Tennessee: There has been talk of a QB controversy in Tennessee, but that seemed to be media generated and was quickly squashed by the team and insiders who cover the Titans. If the most recent NFL Preseason game was any indication, Marcus Mariota is going to push the ball to Corey Davis quite often. Davis was targeted three times as he played just 25 percent of the snaps. This is the year for Davis to prove he can reach his considerable potential and the same for Mariota. The two need each other to raise their games, and this is especially important to note for Davis’ 2019 Fantasy outlook. He should be still be drafted as back-end WR3 for the talent and possible upside.

What storylines are you watching this NFL preseason? For more great rankings, sleepers, and analysis check out the 2019 Fantrax Fantasy Football Draft Kit.

Two Start Pitchers for the Week of August 26: Pineda Party