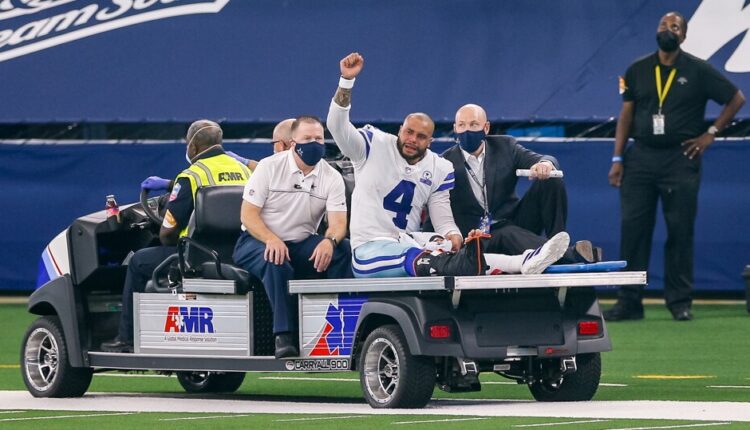 Nic Civale is a Doctor of Physical Therapy and former NCAA Division I athlete. This week’s NFL Injury Report focuses on fantasy-relevant players who are likely to miss multiple weeks, and how to handle their absences.

A large part of roster strategy is knowing what to expect from your players, so let’s take a look into this week’s most relevant long term injuries.

The Browns will miss their star back, Nick Chubb, for what is being reported as, ‘several weeks.’ Chubb suffered an MCL injury after getting his knee rolled over by a defensive lineman during Week 4’s win over the Cowboys. The MCL is the Medial Collateral Ligament of the knee and helps to prevent it from caving inward – the direction most people would describe as ‘knock-kneed.’

When the knee is forcefully driven into this valgus position, the ligament is overwhelmed with force and is sprained, or in some cases, torn. Considering Coach Stefansky expects Chubb to be back at some point in the season, and the fact that he will be avoiding surgery, we can assume this is a sprain and not a tear.

Chubb is a crucial part of the Cleveland offense, but the Browns are one of the few teams in the league that have the luxury of rostering two pro-bowl caliber RB’s. Kareem Hunt will likely continue to see most of the carries- he saw 23 compared to D’Ernest Johnson’s 9 in Week 5. Hunt remains limited in practices but expects to be ready for the tough Pittsburgh defense this Sunday.

Nick Chubb is a tough player to drop from your roster, but it is difficult to say when he will return. It would be wise to keep him on your bench – or IR if possible – until we hear a more specific timetable for return.

For those wondering whether or not to hold on to Sony Michel, after his quad injury; you have a difficult decision to have to make. The last impression we have of Michel is a 9 carry, 117-yard breakout performance. Since his rookie year, he has shown flashes of greatness, and it was clearly on display in the week 3 contest vs. the Raiders. Since then, Michel has been transferred to the IR as of 10/5 and will be eligible to return in Week 8.

The Patriots’ backfield is filled with options, and the offensive gameplay is as deceptive as ever. Michel will certainly play a role upon return, but it will likely only be a shared role. Unless you are in a 15-team league or greater or are desperately thin at RB, it’s okay to drop Michel.

This week’s deep dive is focused on the highest-profile and most severe injury of the week. Sadly, Dak Prescott will miss the remainder of the season after he suffered a compound fracture with dislocation of the right ankle. For those who do not like details about gruesome injuries, just know that Dak had surgery and is expected to recover fully, and stop reading right about here.

A compound fracture involves a bone that is so traumatically broken that is snaps and is able to break through the skin, exposing the bone and other internal vessels and tissue to the air. This description may remind you of Paul George’s nasty injury in international play a few years back.

One of the issues with dislocation is that the ligaments that hold our skeleton in place often times get violently stretched, which can lead to lifelong tendencies toward sprains and further dislocations. There have not been as many updates on the condition of the surrounding ankle ligaments post-surgery, but it is almost certain Dak will be sporting a thick coat of tape or a brace next year and beyond to prevent any re-injuries.

The fracture Prescott suffered caused the bones of his distal (lower) tibia and fibula (shin bones) to break skin on the medial (inner) side of the foot. Google images will get you a closer look, and it’s merely PG-13 because he has socks on. If you can find the close-ups, you’ll see the inner ankle has a giant bulge and the foot is clearly facing the wrong direction, rotating about 60 degrees out to the side.

Dr. Gene Curry of the Carrell Clinic was the surgeon who performed Dak’s procedure. he is an experienced surgeon with a history of performing ankle-specific surgeries on big-name athletes. The surgery was reported to be a success, and Dak has released a few public statements confirming he is doing well and in good spirits.

The expectation for recovery is to return to 100% with proper rehab and a good deal of patience. Dak will likely start his rehab with non-weight-bearing activities, walking with crutches. After a good 8-12 weeks, Dak will be progressed to partial weight bearing on the right foot, while still using crutches to off-set most of the weight.

He will be able to lightly move his ankle in all directions but will need to be cautious not to push through any pain, as this will set off a great deal of inflammation. Physical therapists will work with Dak to provide some passive range of motion – or movement of the joint that does not involve any active muscle contraction from the patient. Rehab will progress slowly and ultra-conservatively.

Once Dak is back to walking without crutches and without any limitations to weight-bearing, he may still be in a walking boot. He will be slowly progressed to more dynamic activities, with a significant amount of focus on balance and stability.

Knowing all of this, we can be certain that Dak will have the best of the best working with him through this tedious and patience-testing process. All the while, he will be working on contract negotiations with Dallas, and maybe others. It’s a sad time for America’s Team, as well as anyone who is a fan of the game. Prescott is a true competitor and has demonstrated class and maturity on the field. We hope to see him back to begin next year.

If you enjoyed Nic’s Week 6 NFL Injury Report, make sure to check our full slate of Week 6 Fantasy Football Analysis.