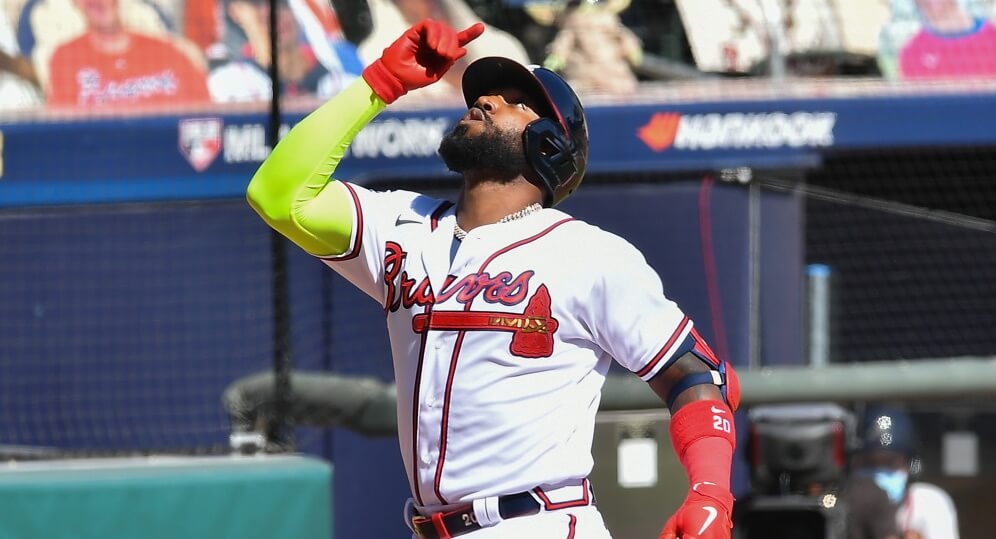 What a season for Atlanta Braves outfielder Marcell Ozuna. He was across the board one of the top hitters in all of baseball. Among qualified hitters throughout the entire league, Ozuna finished fourth in batting average (.338), third in home runs (18), and second in RBI (60). His per 600 plate appearance numbers were as good as they ever have been (see table below). If it wasn’t for teammate Freddie Freeman’s insane season, Ozuna would likely have been the MVP of the shortened 2020 season. That’s how good he was. As great as his counting stats were, his underlying numbers were just as impressive.

Marcell Ozuna and The Sea of Red: Statcast Profile 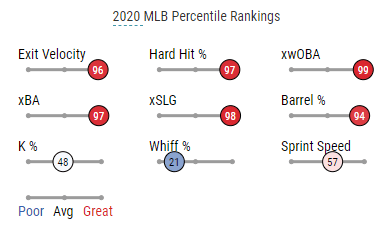 With that said, how did Ozuna go from a borderline top 100 draft pick in the pre-season to a potential top 30 selection heading into 2021 drafts? Outside of his insane batted ball profile, what changed in the other facets of his game that led to this monster season? Did anything change at all? Keep reading to figure out.

Is the MVP Pace Legit?

First, if Ozuna kept his pace across 600 plate appearances, his final stat line would be .338 / 85 / 40 / 126. Those are unquestionably MVP-esque numbers.  The real question is, can he do that across an entire season?

When diving deeper into Marcell Ozuna, the most noticeable thing is he has always hit the ball hard. His career 45.9% hard-hit rate is an elite number, as it sits a full 11% above league average. In 2020, he had his highest career mark in the metric, hitting 54.4% of his batted balls above 95-mph. His next closest mark was in 2019 when he maintained a 49.2% hard-hit rate.

It’s quite obvious where that change came from, as there is a direct correlation between his rising hard-hit data and his rising launch angle. Prior to 2019, his career-high launch angle was 10.8-degrees. In 2019, he rose that up to 13.5-degrees. In 2020, it was at 16.4, a full 4.5-degrees above his career average. Not coincidentally, that led to a career-high (and 94th percentile) barrel rate. That’s about as good as it gets.

Examining Ozuna’s plate discipline, there really isn’t much that happened in 2020 that was different than prior seasons. His swing percentage was only one percent lower than his career average. His contact percentage was actually four percent lower than his career average. But where things start to become noticeably different is in his plate approach. First, Ozuna has become a more patient hitter.

Prior to 2019, Ozuna averaged 3.75 pitches per plate appearance. Over the last two seasons, Ozuna has raised that total to 4.12 in 2019, and 4.02 in 2020. By going deeper into at-bats, he has had his two highest walk rates of his career in back-to-back seasons, with 14.2% in 2020 being the highest of his career. Drawing more walks makes pitchers pitch in the zone more, and as we have already figured out. 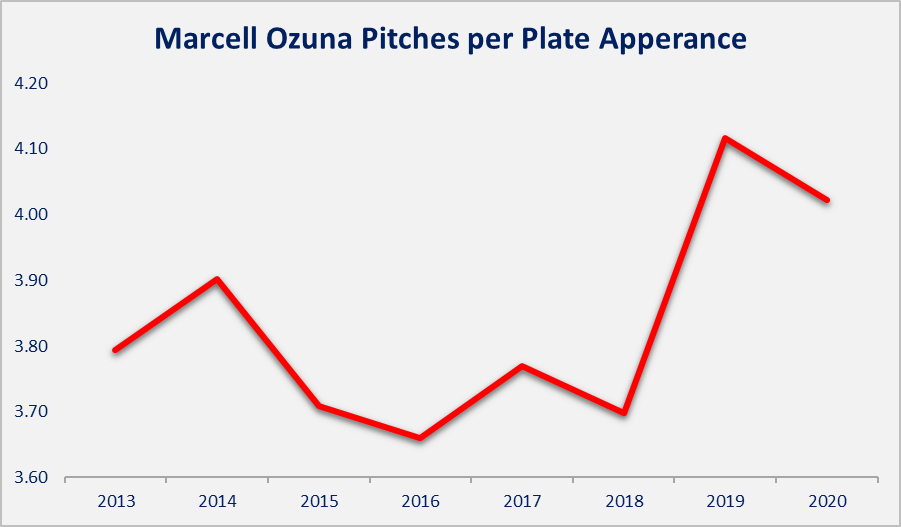 If there is one criticism of Ozuna, it is that he is capable of a high swing and miss profile. His whiff percentage is the only blue in his statcast profile, as he sat at a lowly 21st percentile. His 13.5% swinging strike rate is also above average, being higher than you would ideally want. However, what Ozuna lacks in contact skills at times, he makes up for in not striking out at an extremely high rate.

Typically when we see hitters raise their launch angle as Ozuna did over the past two seasons, that can lead to a spike in strikeouts. That was not the case for him, as his 22.5% strikeout rate was right around league average, and only one percent higher than his career average. So despite a lot of swing and miss in his game, Ozuna simply is not a problem in the strikeout department. 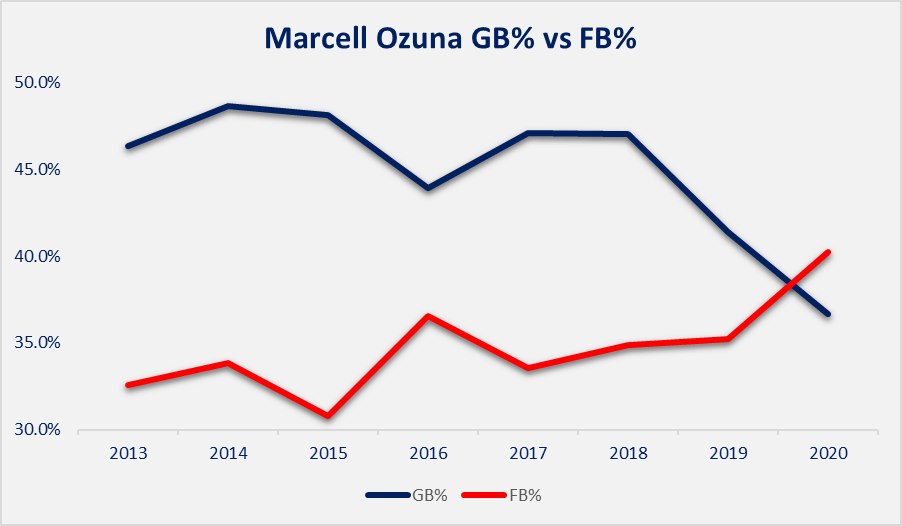 When examining his soft, medium, and hard contact as defined by Fangraphs, Ozuna had a solid 46.2 Hard%. The year prior, it was even higher, at 48.4%. Those two seasons were up from a career 40.2% mark. Once again verifying that Ozuna is hitting the living daylights of the ball. Perhaps even more frightening for opposing pitchers is the fact that Ozuna had a decent 14.8 Soft% with a career outlier 16.2% infield fly ball percentage.

Ozuna had never been above 10.2% before. Even with the rise in launch angle, I would expect this number to fall, possibly leading to more hard hit fly balls. He is giving us very little reason to doubt him, as every box seems to be checked.

The big question for Ozuna heading into 2021 will be, does he re-sign with Atlanta? If he does, he is without a doubt a round-two selection in your redraft leagues. In Atlanta, Ozuna has been a more patient hitter, he has elevated the ball as good as ever, and he has the opportunity to knock in Ronald Acuna, Ozzie Albies, Dansby Swanson, or Freddie Freeman on almost any given at-bat. If the Braves resign him, he has the ceiling of what we had grown accustomed to with J.D. Martinez over the years.

If Atlanta doesn’t resign him, that’s where things get a little more interesting. The stadium and lineup that Ozuna surrounds himself with will play a large role in his outlook. All you have to do is go back and look at his time in St. Louis, where his counting stats suffered, despite maintaining solid underlying statcast data. However, it is doubtful Ozuna would go to a team similar to St. Louis which seems to suppress its lineup. There are far more teams out there Ozuna would flourish with than not.

Overall, everything in Ozuna’s supporting numbers tells us that his 2020 season was 100% legitimate. A rise in launch angle with the consistent hard hit data supports a 40 home run bat. Hitting third or cleanup in Atlanta’s elite lineup, Ozuna would be a candidate to lead baseball in RBI as well. If he is a player being targeted in the second round, don’t hesitate to snap him up if the elite power/speed players are off the board. Simply put, there aren’t many better pure hitters out there.