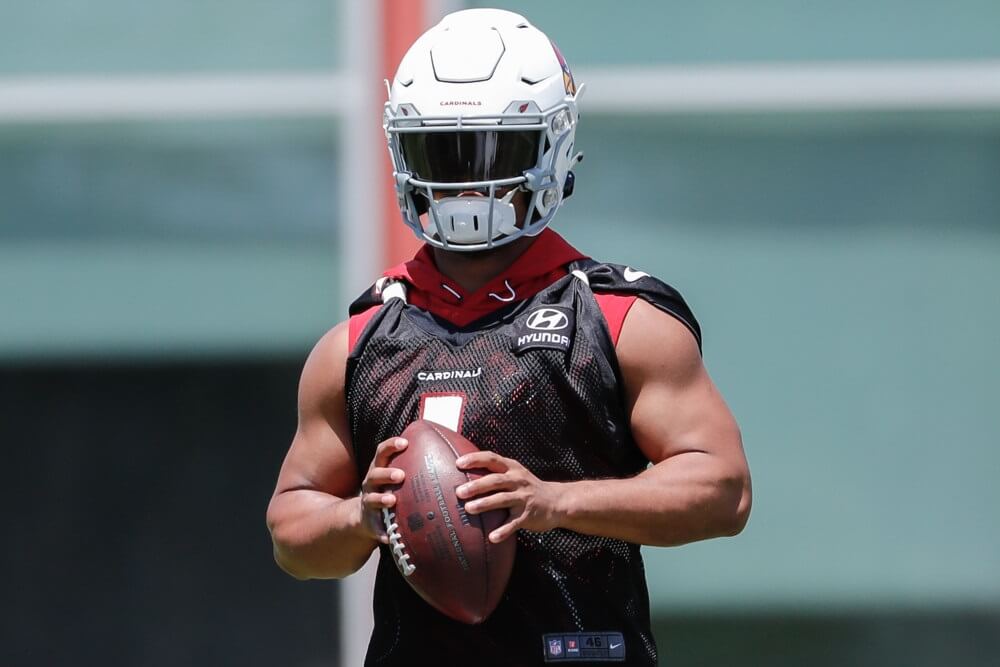 The King is on the Training Camp beat for FanTrax HQ. As camps open this week, we take an in-depth skill position look at the teams in the NFC West and tell you what to watch for in the preseason.

Quarterback: Kyler Murray will get his first look at pro defenses for real soon in the NFC West, and how he responds in exhibition play could cause his Fantasy value to rise or fall a bit. He is either being regarded as a low-end QB1/high-end QB2 by a lot of Fantasy analysts.

Running Back: There seems to be renewed Fantasy hope surrounding David Johnson with a new coaching regime and QB improvement. Working with a creative QB could boost him back into the conversation among the best Fantasy RBs.

Wide Receiver: Larry Fitzgerald is a very important piece for a young QB, and he can be a Fantasy WR3 if Murray sparks the offense as hoped. In the preseason, we will be very interested to see the connection Murray can establish with Christian Kirk, who has more promise playing with a better passer this year. Andy Isabella should be watched closely as a frequent contributor, and he is worth a late-round flier. Hakeem Butler is more on the dynasty radar.

Tight End: Charles Clay has the edge in experience, but Ricky Seals-Jones has more upside. These two will likely battle for the starting job, and I expect RSJ to win it and become a consistent TD target for Murray near the goal line.

Quarterback: Jared Goff played at a Fantasy QB2 level last year before Cooper Kupp went down, yet he still is being labeled as a system QB who sometimes gets rattled under pressure. Goff is still something of a work in progress and he has to finish this season strong and play well at a high level all throughout the schedule. Not much more will be revealed about him until play begins for real in the NFC West.

Running Back: Todd Gurley will not play in any preseason games, so rookie Darrell Henderson will get a long look and show Fantasy players what he is capable of when pressed into action. Gurley is a strong candidate to miss some time, so the preseason will be important to fully determine Henderson’s appeal. Malcolm Brown is still in the mix for depth and could become more interesting if Henderson does not have a strong preseason. John Kelly may have to win a roster spot with another quality preseason showing.

Wide Receiver: Robert Woods and Brandin Cooks won’t need to prove anything, they just to need to get some reps to stay in the offensive flow. But Cooper Kupp is still on the road back from a major knee injury and even he is ready for the opener, it could take some time for him to round back into his best form. Don’t draft him expecting Fantasy WR2 production for the first few weeks of the season. We will be sure to monitor his progress during camp. Josh Reynolds will not play over Kupp, and could remain buried on the depth chart as Kupp gets a lot of reps, but with less productivity than expected.

Tight End: This is a situation to watch in the NFC West as there has been talk of incorporating the TE more into the offense this season. If that happens, Gerald Everett could become Fantasy relevant in 2019. Tyler Higbee is also in the mix but Everett has more upside for Fantasy purposes.

Quarterback: Jimmy Garoppolo will be watched to see how he performs in camp and in preseason play. Everything went fine in OTAs, but now with more pressure on him to execute in game-like conditions, onlookers will want to see how his mechanics and throws look. If all goes well, he could be a respectable and sometimes outstanding Fantasy starter.

Running Back: This is the position everyone is watching in the NFC West. Tevin Coleman has experience working with Kyle Shanahan and that can give him the advantage to be the lead RB. But this figures to be a pure committee if everyone is healthy. Matt Breida will suck some reps away from Coleman and Jerick McKinnon may be pigeonholed as the receiving RB. Unless injuries strike, none of these guys will be dependable, but it may still take the preseason to see exactly how things shake out here.

Wide Receiver: It will be interesting to see, and we will have to watch who emerges to develop a strong connection with Garoppolo. There has been talk of Marquise Goodwin playing a more reduced role, so the preseason could be very telling about expectations for Dante Pettis and Deebo Samuel. Those are the two WRs with the most upside in the WR crew. Let’s not realistically waste any time considering Jordan Matthews as a player of Fantasy consequence. Kendrick Bourne cannot be forgotten but does not appear to be draftable. Jalen Hurd is more of a project for dynasty leaguers to consider.

Tight End: We all know what George Kittle is now, and a healthy Garoppolo should ensure he remains elite. We’ll be watching the other positions for Fantasy purposes here. He is the only true quality TE in the NFC West.

Quarterback: The only minor concern for Russell Wilson may be an adjustment to not having Doug Baldwin at all for the first time in his career. But Wilson did work without him for extensive periods last season, so it may not be an issue at all.

Running Back: Chris Carson missed OTAs as he recovered from a knee procedure, but there are no signals there are any major concerns about his availability for the season. But Carson does seem to be a frequent injury concern. Rashaad Penny should cement his role as a complement to Carson this preseason, and the two could share playing time when both are available. If Carson misses any extended time, Penny could morph into a quality Fantasy RB2.

Wide Receiver: Tyler Lockett may take over for Baldwin in the slot, which could mean more catches and yardage and fewer TDs than last season. David Moore is well-liked and highly regarded internally and has sleeper potential. The most compelling player in camp is rookie D.K. Metcalf, who is the most promising combination of size and speed that Wilson has ever worked with. He has dazzled during early workouts and could be an instant impact player. Let’s see how he and Wilson look together during exhibition play. Outside of Murray, he could be the most significant first-year player in the NFC West. Another rookie, Gary Jennings, is worth watching for some dynasty league appeal.

Tight End: Will Dissly showed some brief signs of productivity early last year before a knee injury took him out. He does not figure to be anything more than a Fantasy TE2, though.

What storylines are you watching in the NFC West? For more great rankings, sleepers, and analysis check out the 2019 Fantrax Fantasy Football Draft Kit.