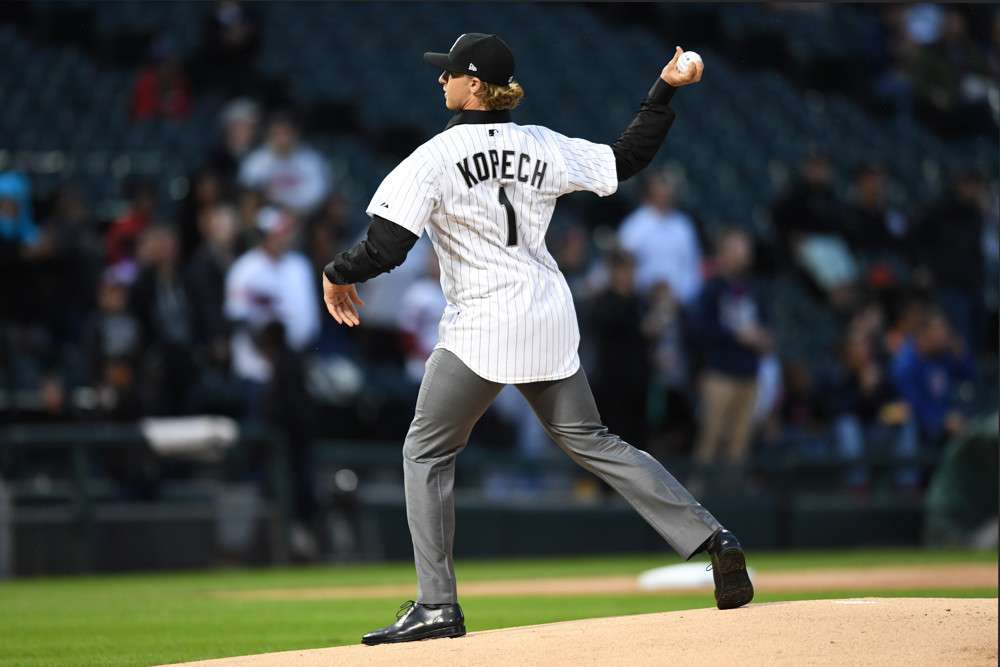 This piece might be new to Fantrax, but it’s a piece I’ve been writing all season long. Fantrax and I had been going steady for a while, but now things have gotten serious, which is why I bring this piece over from FantasyPros where I used to write it. I know you’re used to Dynasty Dugout on Tuesdays, but the Michael Kopech promotion threw a curveball into my weekly plans. Actually, more like a Chris Sale slider (rest up big guy). But don’t worry, I’m just pulling the old switcharoo with Dynasty Dugout coming later in the week.

In this week’s report, I got a little pitchty. No, that’s not a typo. I meant that this week is all about pitching prospects. Kopech isn’t the only intriguing prospect to make his Major League debut this week, In fact, we’ll have three pitching debuts in a little over 24-hours. What a great time to be a prospect hound.

Yes, there’s a reason why I spelled crazy with a K instead of a C. First off, it goes with the name Kopech. But that’s not the reason why. It’s because the letter K is a common letter used during a Kopech start. Now he gets his chance to see how many Ks he can rack up against Major League hitters. Over his 395.2 career minor league innings, Kopech has a majestic 11.7 K/9 to go along with a 3.05 ERA and 1.22 WHIP. Really good numbers right?

Wait, something’s missing. Where’s that walk rate? I left that out for a reason, as it’s the red-headed stepchild compared to the rest of Kopech’s career numbers. That number sits at 4.4 for his career, 4.3 this season, and has never been better than 3.7. Walks were a big reason why Kopech wasn’t up with Chicago months ago, in addition to the always-maddening service time. After starting the season with five straight starts of two walks or less, Kopech forgot where the strike zone was, posting a 7.7 BB/9 over a 12 start stretch from May 6th to July 5th.

That July 5th start was Kopech’s last before the Triple-A all-star break which gave Kopech nine days between starts to figure his you know what out. And figure it out he did. In seven starts since the break, he’s only walked four batters for a minuscule 0.8 BB/9. Much better Michael.

"Electric, I guess you could say." ⚡️

Here's a look at what to expect from @whitesox flamethrower Michael Kopech when he makes his @MLB debut tomorrow: https://t.co/Ep3cItFUeJ pic.twitter.com/twSvhJPcQf

When it comes to two-pitch combinations, you’ll have a difficult time finding a better pairing than Kopech’s fastball and slider. Kopech throws in the upper-90’s with plenty of life on that heater and can maintain that velocity deep into his starts. And when he needs a little more giddy-up, get ready for triple-digits. Outside of his fastball, Kopech’s best secondary pitch is a plus-plus 86-89 mph slider with hard, two-plane break. These two pitches alone will allow Kopech to continue to rack up the strikeouts and find success at the Major League level. What will determine if he becomes a staff ace or a high-K SP 2/3 is his control and development of his currently average, yet inconsistent change-up.

If Kopech is still sitting on your waiver wire, add him immediately. Assuming nothing goes catastrophically wrong tonight, Kopech should remain in the White Sox rotation for the foreseeable future and has immediate SP25 upside in fantasy due to his elite strikeout totals. Now, where in the world is Eloy Jimenez? Charlotte is the current answer to that question. Why don’t you go ahead and change that for us White Sox,

Did you miss out on grabbing Kopech in your fantasy league? No need to fret. I ranked the top-10 potential prospect promotions for the rest of the season, led my Jimenez, last week in Dynasty Dugout.

Kopech might be the biggest prospect name to be promoted recently, but he’s far from the only one. In a surprise move, the Braves called up right-hander Bryse Wilson from Triple-A Gwinnett after just three starts at the level. Wilson didn’t disappoint, firing five innings of shutout ball, allowing three hits and three walks while striking out five. This shouldn’t come as much of a surprise when you see his 3.27 ERA, 1.16 WHIP, 2.5 BB/9, and 10.1 K/9 across 23 minor league starts this season.

Wilson features a 92-95 mph fastball with strong arm side run and sink that he uses to induce plenty of weak-hit grounders. He pairs that with a slider and change-up, both of which have flashed above-average to plus potential at times. Control is not an issue here as you can see from his strong walk rate above. If he can continue developing his secondary pitches, Wilson has the upside of a #2 or #3 starter in the Majors. Just don’t expect to see him much more this season as yesterday was just a spot start to get the rest of the staff an extra day of rest. If anything, Wilson could come back in a bullpen role come September to help the Braves playoff push.

Over in the American League, the Twins called up their #2 pitching prospect (according to me, behind Brusdar Graterol) Stephen Gonsalves for his Major League debut against the White Sox. If they had waited one more day we could’ve had a Kopech/Gonsalves battle of the debuts, but that’s cool. Don’t give us that joy Minnesota. Unlike Wilson, Gonsalves’ debut didn’t go according to plan. The tall southpaw allowed four runs on six hits in just 1.1 innings of work, walking a pair and striking out three.

While he doesn’t have top of the rotation upside like Kopech or Wilson, this debut was still a let down given the strong season he was having in the minors. In 120.2 innings, Gonsalves had a clean 2.76 ERA, 1.17 WHIP, and 9.0 K/9, though his walk rate has climbed up to 4.5 BB/9 this season, a career-worst. Like I said earlier, Gonsalves doesn’t have elite upside, but is a fairly safe prospect overall. He features a low-90’s fastball, plus change-up, and two breaking balls that will likely be at least average pitches for him. His control can come and go, but Gonsalves shows poise and pitchability on the mound and is a safe bet to turn into a strong mid-rotation starter.

No, not the Atlanta rotation. That’s already a cluster-bleep as it is. However, Gohara did rejoin the Triple-A Gwinnett rotation on Thursday, after shoulder soreness kept him out of action since late-July. It hasn’t exactly been the season we were expective from the hefty lefty after an impressive cup of coffee last season. An ankle injury delayed his season debut, while inconsistency and nagging ailments have hampered him basically the entire season. I was one of the biggest Gohara supporters out there back in the spring and heavily invested in him in fantasy. For anyone who followed suit, you have my apologies. This has been a lost season for Gohara, but the future is still bright.

Let me rephrase that last sentence. The future is bright if Gohara works on develops his change-up and betters his control and command of his arsenal. That’s all. I scouted the Brazillian southpaw (along with some guy named Ronald Acuña) back in April and it was very clear that Gohara’s fastball and slider were Major League ready, but that was about it. Luckily, the Braves have 3.6 thousand arms they can deploy in their rotation which allows Gohara to work on these things in Triple-A for the time being.

If his struggles this season have created a buy-low window in dynasty formats, and it more than likely has, grabbing Gohara now while his price tag is lower could pay big dividends down the road. There’s still a chance that his control doesn’t develop much and he ends up in the bullpen, but the upside of a #2 starter still remains. You just have to be a little patient with this one.

Usually, a player to be named later is an afterthought in a trade. Let’s face it, PTBNL is usually a cop-out when two teams can’t think of a return player and want to just figure it out at a later date. Well, in the Chris Archer deal, that PTBNL “afterthought” wasn’t an afterthought at all unless you consider a top-100 caliber prospect an afterthought. I know I certainly don’t.

Of course, the PTBNL that I’m talking about is right-hander, Shane Baz. The 19-year-old Baz is still down in rookie ball, but has the arsenal that makes people like me salivate. Listen to this. A mid-90’s fastball with run that he can rachet up into the 97-98 range with the potential for three plus secondary offerings to go along with it. Baz’s cutter and curveball are already plus-pitches and his change-up isn’t too far behind. This kid has a bright future if his development continues as planned. This Rays system just keeps getting deeper and more talented.

Last week, I scouted powerful third baseman, Bobby Dalbec, and big right-hander, Trevor Stephan, in a battle of the Red Sox and Yankees Double-A affiliates in the Eastern League. Here are the full scouting reports on each player.