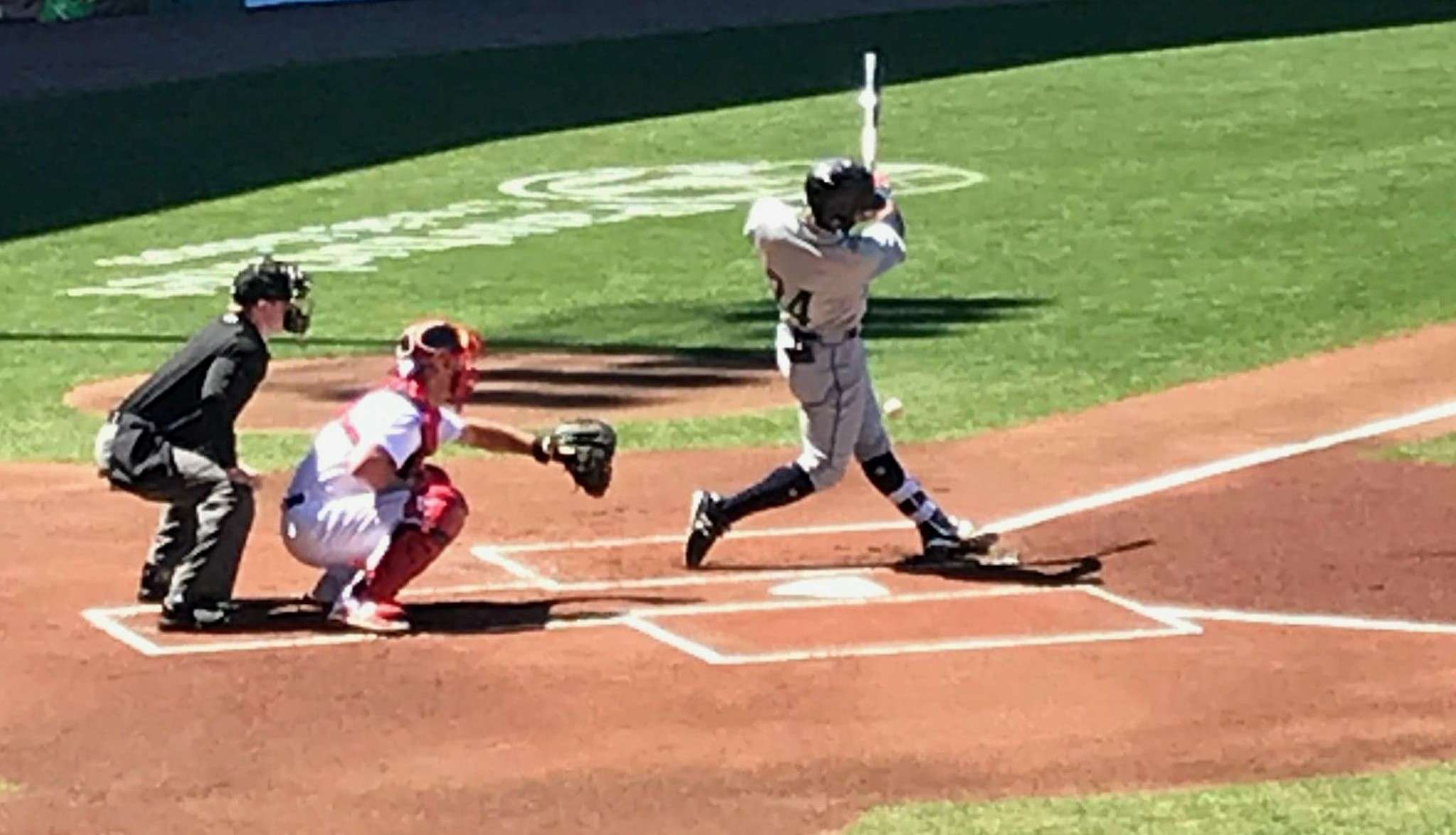 Isn’t that how the song goes that Timon and Pumbaa sing in “The Lion King?” No? That’s how I remember it from my childhood anyway.

Well, I was singing this song in my head for four-plus hours on Sunday as I made the three-hour drive from Maine to Pawtucket, R.I. to watch Braves uber-prospects Ronald Acuña and Luiz Gohara.

The timing proved to be excellent, as we learned this morning that the wait for Acuña is about to be over — Atlanta is calling up  everyone’s favorite prospect for today’s game. Finally!

It was a perfect day for baseball in Pawtucket with temperatures in the low 60s in the sun, unlike last weekend when I scouted Vladimir Guerrero Jr. and Bo Bichette in New Hampshire. But the weather was just the cherry on top of the prospect-smothered sundae I was about to enjoy with Acuña and Gohara that ended with a 10-9 walk-off win for Pawtucket in 11 innings.

After a dominant 2017, Acuña was being taken as a top-100 draft pick in virtually all fantasy leagues, and I even saw him sneak into the top-50 in a couple drafts. (No, it wasn’t by me.) The hype train nearly derailed as Acuña hit .432 with four homers and four steals over 44 at-bats during spring training. Even with the hot spring, everyone knew a brief demotion to Triple-A was coming so Atlanta could pick up another year of control on the generational talent.

Whether the move was right or wrong, Acuña didn’t do himself any favors by starting the regular season as cold as winter in Rhode Island. He didn’t record a hit until the fourth game of the season and was sitting at a measly .139 with 14 strikeouts through his first 36 at-bats. It didn’t take a rocket scientist to figure out that Acuña was pressing at the plate and not doing what made him the top prospect in all of baseball.

That’s all changed over the last six games, which is the reason why he’s finally being promoted to the show. Acuña had 11 hits in his last 33 at-bats and picked up his first home run of the season on the 17th against Scranton Wilkes-Barre. Three of this hits came on Sunday with yours truly in attendance.

After popping out to shallow right field in his first at-bat, Acuña grabbed his first hit of the afternoon, depositing a breaking ball from William Cuevas into left field.

One thing that I love about Acuña at the plate is the simplicity of his set-up and swing. With the exception of a little bat wiggle, he’s calm and collected in the box. That bat wiggle even stops right before the pitch as Acuña really locks himself in.

Acuña has a slightly open stance with his front foot a few inches behind his back foot to start. Once the pitcher begins his movement to home plate, Acuña coils that front leg into a moderate leg kick before exploding forward toward the pitch. On this particular offering, Acuna does a great job adjusting and keeping his bat in the zone long enough to make solid contact and drive the ball between the shortstop and third baseman into left field.

It’s not often you see Acuña get off-balance with his swing. He generates his power with quick wrists, a strong lower half, and above average bat speed with a smooth, slight uppercut swing through the zone. He hasn’t been hitting for much power this season at Triple-A, bu it will come. I think it was Kevin Costner in Field of Dreams who said, “If you swing well, homers will come.” Or something like that.

An aspect that really impressed me on Sunday was Acuña’s elite speed. He demonstrated this several times throughout the afternoon, but there are two particular moments that I want to focus on. The first was a routine chopper in front of the plate. After a less than stellar jump out of the box, Acuña flies down the basepath and steps on first in what I clocked as between 3.8 and 3.85 seconds. Even if I was a little quick on the stopwatch and it was more like 3.9, that still would rank as one of the fastest in the major leagues along with guys like Billy Hamilton and Dee Gordon.

He wasn’t done there, either. Later in the 11th inning, he got on once again with another single to left, right before Rio Ruiz roped a double over Acuña’s head and down the right-field line. Acuña took off like a kid leaving school for summer vacation. He hit a max speed of what I’m sure was around 80 mph between second and third and came in to score easily.

Apologies for the camera work in the beginning, got bumped by another spectator.

Man is he fast. Unfortunately, I didn’t get to see any stolen bases out of him, though he teased me a few times by faking like he was going. There are no questions that Acuña is going to be one of the fastest runners in the league the second he steps foot on the field at Great American Ball Park in Cincinnati tonight. He has immediate 40-steal upside. In the first game of a double-header on Monday, Acuña swiped three bags and scored the lone run of the game for another top Braves pitching prospect, Mike Soroka.

This kid is the top prospect in baseball for a reason, so don’t let his slow start deter you in the least. He’s one of the best prospects to come up over the last decade and I’m glad I got to see him live before he makes his major league debut.

First off, Gohara resembles a younger C.C. Sabathia and has the upside to match. Expectations for Gohara were understandably high after an impressive five-start debut in 2017 in which he registered a 4.91 ERA (2.75 FIP), 1.36 WHIP, 2.5 BB/9, and 9.5 K/9. But, unfortunately, that pesky little injury bug sunk its teeth into Gohara twice this spring. First, it was a groin strain at the beginning of spring training. He recovered from that only to sprain his ankle shortly afterward and has been sidelined ever since.

This was Gohara’s second rehab start after after going 3.1 innings with Double-A Mississippe last week, allowing one earned run on five hits while walking three and striking out three. He was much better than that on Sunday with Triple-A Gwinnett. If it hadn’t been for a grooved 93 mph fastball to Mike Ohlman, this would’ve been four shutout innings for the portly lefty.

As mentioned, Gohara is a big boy. Built like a brick house at 6-foot-2 and 265 pounds, Gohara uses his powerful legs to drive forward and get plenty of zip on his fastball. It doesn’t matter where you’re sitting in the ballpark, you’re going to clearly hear his mid to upper-90’s cheese popping that catcher’s mitt. He wasn’t quite in the upper-90’s this game, but was sitting 92-95 with his fastball and got quicker further into his start.

In the third and fourth innings, Gohara was touching 95 and topped out at 96. Unfortunately, he only went four innings as Atlanta wanted to keep him around 60 pitches (Gohara threw 58 through four innings.) I was walking to sit behind the plate to get a look at his slider movement when I realized that either Gohara lost 50-plus pounds or a new pitcher was warming up on the mound for Gwinnett. Shucks.

Speaking of that slider, it was downright nasty during this game and you could even see that filth while sitting behind the first base dugout. Gohara’s fastball receives an 80-grade from most scouts, and his slider isn’t that far behind it, garnering many 70-grades. He throws it in the 82-86 mph range with very late life. That’s the key right there.

Just imagine sitting with a two-strike count against Gohara. He’s just blazed two four-seamers in at 95, 96 and now you’re not sure if that gas is coming again. Gohara winds and deals a pitch that you think is another heater. You do a little toe-tap and start your swing, only to realize that it’s a slider and you just swung over it by six inches. The late life is hard to pick up and is nearly unhittable when Gohara is throwing it well due to the hard two-plane break.

As good as those pitches are, his change-up is a work in progress. He sits in the 85-87 range with his change but has a hard time locating it and generating fade. On Sunday, Gohara once again couldn’t locate the offering, usually missing high. Luckily, leaving a few change-ups high didn’t come back to haunt him and he ended the afternoon with a big, fat goose egg in the walk column.

The zero walks were certainly an encouraging sign, as they have gotten Gohara in trouble throughout his minor league career. His control and change-up development will go a long way in determining just how special of a southpaw Gohara can be. As it is, he should be at least a borderline ace with his fastball/slider combination and subpar change. However, if the control and change-up develop some, Gohara has a chance to win multiple Cy Young awards in his career and be one of the best fantasy arms for a long time.

Got a question I didn’t cover here? Ask below or follow me on Twitter and ask there.

Twitter on Fire: Taking the Fans’ Pulse Before the NFL Draft