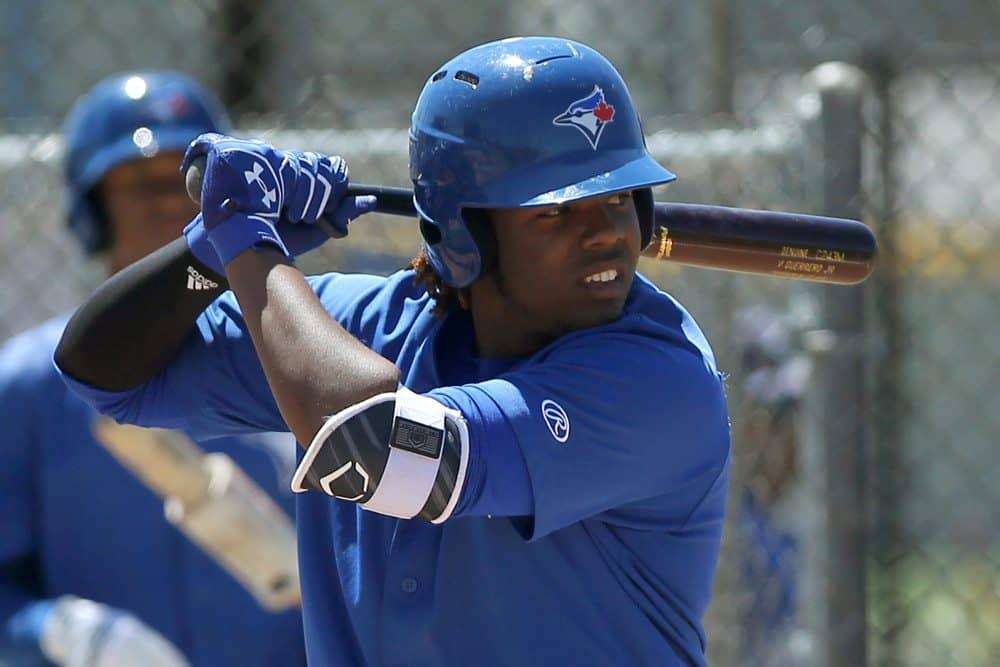 Even people living under rocks know about the offensive prowess of Vladimir Guerreo Jr. and Bo Bichette, two second-generation hitters who have been turning heads all spring. Prospects like this don’t come around very often, and the fact that both currently play for the New Hampshire Fisher Cats is just plain unfair for the rest of the Eastern League. Not to mention that Craig Biggio’s son and Yuli Gurriel’s little brother are also on the roster.

On Saturday night, when the temperatures sat in the mid to upper-30s, I sat down in Northeast Delta Dental Stadium to watch Vlad and Bo lead the Fisher Cats against Brendan Rodgers and the Hartford Yard Goats. Three hours later, I left the ballpark thoroughly impressed with both of them.

Let’s start with Bichette. His father Dante was a four-time MLB all-star who finished his career with 274 home runs, 1,174 RBI, and a .299 batting average. You could say a lot of those baseball genes were passed along to his two sons, especially Bo.

Bichette is one of the few minor leaguers with a legit 70-grade hit tool. He keeps his weight balanced in the box while waiting for the pitch, then shifts his weight to his rear leg, and times pitches with a moderate leg kick. As you’ll see below, his hand movement is perfectly synced with his leg kick. Bichette combines lightning-quick wrists and bat speed with a swing path that is direct through the zone. Put it all together and you have a violent yet controlled swing, and the result is hard contact more often than not.

As of now, Bichette isn’t a big home run hitter and likely never will be. That’s just not his style. But he does generate power with his quick bat speed and is strong enough to have 20 home run seasons in his future.

I’ve said it before and I’ll say it until I’m blue in the face: Bichette is going to win more than one batting crown before he hangs up his spikes. This is a swing you show your kids when they’re learning how to swing a bat. Bichette is one of my favorite targets in dynasty leagues due to his incredibly high upside and high floor. A guy with this type of swing and talent is a safe bet to become a very good major league hitter.

With all due respect to the Bichette family, the Guerreros have them beat. Vladimir Guerrero was one of the best hitters of the last quarter-century, and he did so in a way all his own. Call his swing-at-everything mentality unconventional, but when you can make contact on everything from head-level to pitches that literally bounce in front of the plate, who cares? When you rack up 2,590 hits and a .318 career average, you can swing with your feet or your rear end if that’s what works.

While not as unconventional as his father, Junior is similar in the way that he can barrel up basically anything with a strong, fluid swing. I saw Guerrero for four at-bats Saturday night and not one pitch appeared to fool him. His first at-bat ended with a routine ground out, but it was still an impressive at-bat. Guerrero fouled off several pitches and prolonged the at-bat a couple minutes longer than it should have. You’re going to have to really work to strike Vlad out.

Then, after a Bichette walk to load the bases, Guerrero slapped a base hit into right-center field to drive in two runs and give New Hampshire a 3-0 lead.

Everything about that swing is fluid. Guerrero gets his timing from a quick toe tap, which sets in motion a hard swing through the zone. His hands coil back and drive the bat through the zone in perfect harmony with the toe tap. Like his father, Guerrero has ridiculous hand-eye coordination and bat speed that most can only dream of. No matter where the pitch is, Guerrero can get the barrel of the bat on it and drive it with authority. That all-field power was put on display later on when he lined an outside fastball on a bullet to right field, which might have left the yard if it wasn’t 35 degrees out.

If there’s a flaw anywhere in that swing, I can’t find it. Ronald Acuna might be everyone’s current crush, including my own, but if you ask me who the best pure hitting prospect in the minors is, I’ll quickly answer with Guerrero. An 80-grade hit tool and 70-grade power is a combination that can land you in the hall of fame. This is a man that is going to have several .300/40 seasons under his belt before his career is over.

Long story short, these two are the real deal. You know it, I know it, basically everyone who follows baseball knows it. But to see them firsthand and really be able to study their at-bats up close has made me even more of a believer, if that’s even possible. Who cares if I was freezing my you know what off watching these two. It was worth it.

Toronto has a pair of gems and will plop them down together on the left side of their infield for a long time. As fans, we’re witnessing the birth of two generational talents. So sit back and enjoy the ride. I know I will.

Got a question that I didn’t cover here? Ask below or follow me on Twitter @EricCross04 and ask there.