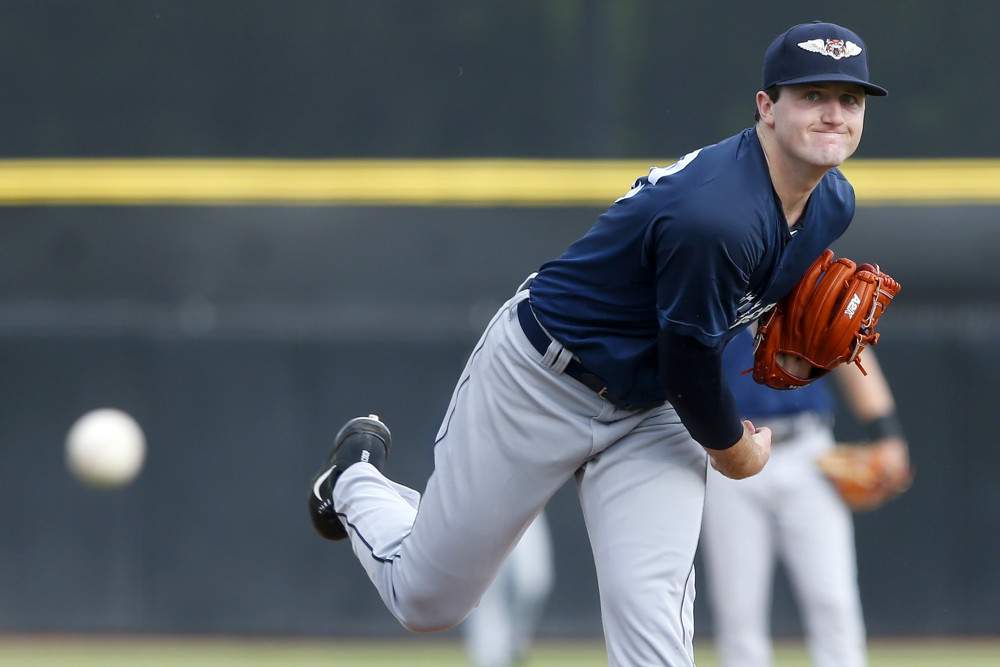 In today’s day and age, driving three and a half hours is a bigger task than it used to be. Gas prices are higher, traffic is thicker, and most people just don’t like driving long distances in general. Well, when Casey Mize, the top pitching prospect in baseball, is scheduled to pitch three and a half hours from you, that’s a pretty damn good reason to make the treck. And when Matt Manning is scheduled to take the mound the following night, it’s like killing two birds with one stone.

With how this season has gone, the title of top pitching prospect in the minors has gotten very close. Who ya got? Comment if other than the four below.#MLB #MiLB #TakeItBack #MotorOn #FriarFaithful #rootedinoakland

Entering the season, Mize was already in the discussion for best pitching prospect in the game, but many, myself included, had Forrest Whitley as the top-ranked arm. Nearly two months into the season and you can see above how things have changed with Whitley struggling, Mize dominating, and Jesus Luzardo yet to make his 2019 season debut. It’s still a close race in my mind, but if you’re forcing me to pick just one to build my rotation around long-term, it’s going to be Casey Mize. Every time out this season, Mize has looked the part of a future ace and even tossed a no-hitter back on 4/29.

So, with that being said, let’s get to the glorious scouting report for Mr. Mize. Fair warning, you’re going to see the words “plus”, “filthy”, “dominant”, etc many times below.

When you watch Casey Mize pitch, one of the first things you’ll notice is his strong frame, especially his lower half. Watch the video below and look at Mize’s strong back leg during his windup and push off towards home plate. That strong push off creates good extension in Mize’s delivery as you can see below.

If either one of my children plays baseball, I might just show them the above video of Mize’s mechanics. Mize comes set with his hands stomach high, push off leg on the left side of the rubber, and lead leg slightly in front. He uses a letter-high leg kick and hides the ball well before firing towards home plate from a 3/4 arm slot with phenomenal arm speed and that strong rear-leg push off I mentioned in the last paragraph. When pitching out of the stretch, Mize uses a more abbreviated waist-high leg kick. These are very clean mechanics that Mize repeats very well.

One of the most beautiful sounds in the world is the sound of a baseball popping the leather of a catcher’s mitt. If you had your sound on while watching the video of  Casey Mize warming up in the bullpen, you heard that pop even over the music blaring in Dunkin Donuts Park. That same sound echoed throughout the ballpark on each Mize heater. Outside of a handful at 92-93 mph, Mize was sitting regularly in the 94-96 range, topping out at 97 a few times. In addition to the high velocity, Mize’s heater features a ton of arm side run. Just look at the movement on the pitch below as he runs a 96 mph fastball back over the outside corner for the strikeout.

Not many hitters, even the cream of the crop in the Majors stand a chance against a 96 mph running fastball on the outside corner. Mize’s plus command makes his fastball even more effective as he can basically locate the pitch wherever he wants. Inside, outside, up, down, it doesn’t matter. The catcher puts down the sign, sets up his glove, and Mize fires it right in where the catcher wants it. Put it all together and this is easily a plus fastball due to the combination of velocity, movement, and command.

Casey Mize 96 running in on the hands.

Most pitchers would kill to have two plus pitches in their arsenal. Well, Casey Mize will attach you with two plus pitches and then, just for kicks, throw a double-plus splitter at you as well. It’s not fair, it’s really not. I’ve run out of adjectives to describe Mize’s splitter. The pitch is dominant, filthy, ridiculous. I could go on for days. Mize usually sits in the 83-86 mph range with his splitter, getting strong arm side fade and drop on the pitch.

Even with the great movement, Mize commands the pitch incredibly well to both sides of the plate, making it almost impossible for opposing hitters on both sides of the plate to make solid contact on. You have to go back to the days of Roger Clemens and Curt Schilling to find a splitter capable of making opposing hitters look this foolish. I’d even say that this is arguably one of the top-3 offspeed pitches in the minors. So nice, you need to see it twice. Different batters, same result.

It’s not often that a plus offering is a pitcher’s 3rd best pitch, but that’s what we have here with Casey Mize’s slider. Thrown in the 85-87 mph range, Mize’s slider is a tight breaker with two-plane tilt darting down and in to lefties and down and away to righties. And if that wasn’t enough, Mize will ramp up the velocity into the 88-90 range and turn it into more of a cutter that he’ll run in on left-handed batters. Both the slider and cutter are hard to pick up out of the hand and Mize isn’t afraid to throw either on any count. He can throw them for strikes or use the slider as another out pitch.

Having an electric arsenal is one thing, but having an electric arsenal that you can command is what causes nightmares for opposing hitters. As I mentioned above, Mize is able to locate all of his pitches with near pin-point accuracy. Fastball, slider, splitter, it doesn’t matter. When you have command like this, walks aren’t something you serve up very often. When Mize walked a batter in the first inning, it was truly a shock. Maybe he got bored from the rain delay, who knows.

Mize is now 14 starts and 70.1 innings into his professional career and has only issued nine walks. That’s it. Opposing hitters are going to have to really work to manufacture runs against Mize as he’s not going to get himself into jams often by walking a couple of batters in an inning. Heck, it’s not often he walks a couple of batters in an entire outing, let alone one inning.

Watching Casey Mize pitch live was a thing of beauty. A true masterpiece. The way he attacks hitters and mixes his pitches shows poise well beyond his years. He’s a bulldog on the mound and wastes little time getting the job done. We’re watching a future ace in the making with CY Young upside. No one should be shocked if Mize is one of the top five pitchers in the game within the next few seasons.

His stay in Double-A Erie isn’t going to be long either with a call-up to Triple-A before the all-star break highly likely if he continues to dominate like he has this season. We plausibly could see him up in Detroit by the end of the 2019 season or very early in the 2020 season at the absolute latest. If you’re a Detroit Tigers fan, consider yourself lucky that you have a guy like this in your system along with Matt Manning behind him. And regardless of which MLB team you root for, each Mize start is must-see for any baseball fan.