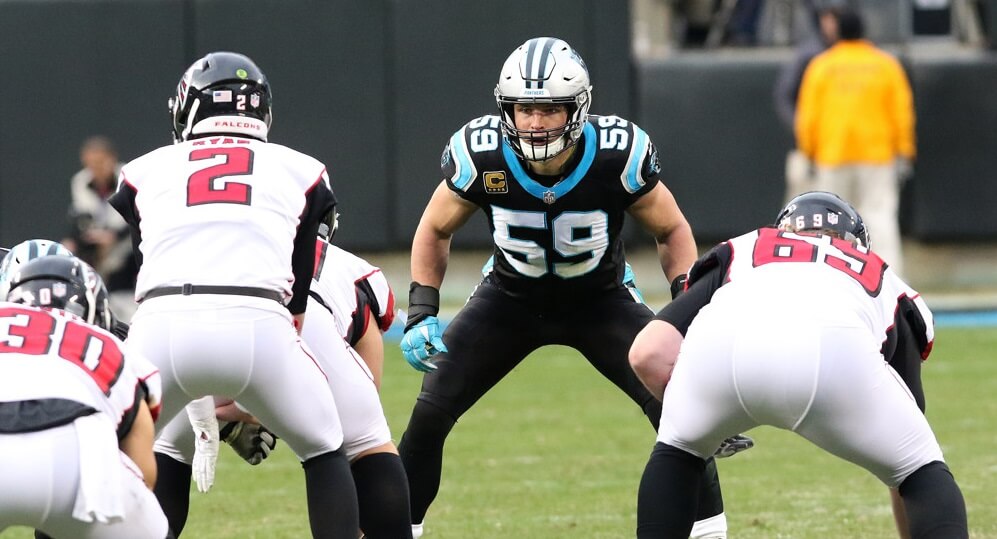 Gary Davenport shares the IDP draft strategy that will have you in the mix all year and still playing come fantasy playoff time!

It’s a saying that’s almost as old as the NFL itself. And while the pro game is more tilted toward offense than ever before, we saw just this past February in Super Bowl LIII how important defense still is when the Patriots held the Rams’ high-octane offense out of the end zone.

However, in most fantasy football leagues, defenses are an afterthought—a position only slightly more valuable than kickers.

Playing in an IDP league can change that. In IDP leagues, rather than drafting a team defense, fantasy owners select defensive linemen, linebackers, and defensive backs. Just like offensive players tally fantasy points for yardage and touchdowns, defensive players accrue them for things like tackles, sacks, and interceptions.

Whether you’re just trying an IDP league for the first time or looking to increase your chances of success in one in 2019, here are some of the baics of an IDP draft strategy that will help you select a competitive squad this summer.

This first tip would seem to go without saying. But every year I watch in dumbfounded amazement as IDP novices and veterans alike torpedo their teams before the season even starts because they didn’t bother to check the scoring before the draft.

There are two factors to consider with the IDP scoring in your league.

The first is the type of scoring itself, which depends largely on the ratio between the points awarded for tackles and “big plays” like sacks and interceptions. If the ratio between tackles and big plays is 3:1 or less (say 1.5 points for a  solo tackle and four points for a sack), then your IDP league is tackle-heavy. It’s the most common form of IDP scoring, and one that heavily favors linebackers.

If the ratio between tackles and big plays is 4:1 or more, then you’re playing in a big-play heavy scoring system. In those IDP leagues, rush linebackers like Von Miller of the Denver Broncos and ball-hawking defensive backs receive a boost in value.

If the tackle to big play ratio is between 3:1 and 4:1, then the scoring in your IDP league is considered balanced. Edge-rushers and ball-hawks are more valuable there than in tackle-heavy formats, but tackle vacuum linebackers and safeties still reign supreme.

The second factor to consider with IDP scoring is how the top IDPs score relative to their offensive counterparts, in that it can provide an easy benchmark for when the top IDP player should come off the board—provided that you’re starting more than just one or two. If an elite linebacker like Darius Leonard of the Indianapolis Colts scored on par with a WR3 like Mike Williams of the Chargers in 2018, then you have some idea when the top linebackers should come off the board. Ditto if Leonard scored on par with a RB2 like Tennessee’s Derrick Henry.

Provided that your IDP league starts two or more defensive linemen, the keyword at that position is scarcity. The talent pool on the defensive line in 2019 is better than it has been the past few years, but it’s still shallower than at linebacker or defensive back. In a 12-team league that starts a pair of D-linemen, the number of dependable weekly starters will run out before the starting slots in your IDP league do.

That positional scarcity makes it all the more important that teams draft aggressively on the defensive line. This isn’t to say that your IDP draft strategy means you absolutely have to reach for an elite player like J.J. Watt of the Houston Texans, but it’s wise to secure at least one defensive lineman who will produce consistently. Acquire a pair of linemen from the top-15 or so and you can gain a substantial advantage over the competition.

Also, while there’s no denying that Nick Bosa of the San Francisco 49ers is a talented youngster with a bright future, it’s rare for a rookie lineman to make a big statistical impact in Year 1. Depending on Bosa (or any of the rookie linemen) as a weekly starter in 2019 is asking to be disappointed.

In the vast majority of IDP leagues, linebackers are the lifeblood of a strong defensive roster. Not only does their ability to pile up tackles make them the highest-scoring defensive players, but it also makes them the most consistent. As such, having a solid cadre of dependable options at the position is key to your IDP draft strategy.

Assuming that at least two weekly starters are required at the linebacker spot, it’s a good bet that three of your first five defensive picks should be linebackers. If your IDP league has a defensive “flex” spot, you’re going to want a linebacker for that slot as well. The depth at linebacker is better than along the defensive line, and there should be some values available later in drafts. But this absolutely isn’t the position you want to get cute at on draft day.

In IDP circles you’ll see plenty of references to “three-down” linebackers. That simply means a linebacker who remains on the field in passing sub-packages. With a majority of NFL teams spending over 50% of their snaps in the nickel and dime, it’s critical to target linebackers who stick in subs. It’s rather hard for a player to rack up stats from the sideline.

Finally, while edge-rushing outside linebackers like Chicago’s Khalil Mack are very important to NFL teams, unless you play in a big-play heavy scoring system or that player has positional eligibility as a defensive lineman their IDP value takes a sizable hit. Their production tends to fluctuate wildly from week to week—depending on whether they notch a sack in a given game.

In IDP leagues, defensive backs are two things. The first is plentiful. With so many teams spending so much time in the nickel, there are over 150 defensive backs who will play significant snaps in 2019. Unless your league is exceptionally deep and/or features a multitude of defensive starters, then there are going to be matchup options available on the waiver wire well into the regular season.

The second thing is unpredictable. Each and every year there are both highly-drafted defensive backs who fall flat and DBs who come from nowhere to have big seasons. Everyone and their mother expected Reshad Jones of the Miami Dolphins to finish as a high-end starter in 2019. He fell out of favor with coaches and finished the year 39th at the position. Shawn Williams’ own mother didn’t expect the Bengals safety to be a fantasy factor in 2019. He tallied 110 tackles and finished second behind Jamal Adams of the Jets.

Given these realities, your IDP draft strategy requires patience at the defensive back position. It’s tempting to spend an early pick on defense on Adams or Derwin James of the Chargers. But it’s smarter to fortify the defensive line and linebacker spots and then focus on upside plays later on. If they pan out, you’ll have gotten fantastic value. If they don’t, there will absolutely be alternatives on the waiver wire.

WHEN TO DRAFT DEFENSIVE PLAYERS

If there’s one question I get asked more than any other each year by IDP novices, it’s this one….

When should I start drafting defensive players?

It’s a question without an easy answer, as things like starting lineup requirements and scoring can have a major impact on draft strategy—never mind that no two drafts are alike.

For what it’s worth, in a recent IDP mock draft conducted at Fantrax using a fairly straightforward IDP setup and scoring system, the first defensive player (Darius Leonard) came off the board late in Round 4. Three more were drafted in Round 5, and over half of the Round 6 picks were IDPs.

If you’re unsure of when to begin drafting IDPs and leery of reaching for one, just relax and let the draft come to you. When that first big run on IDPs happens, you’ll know the time has come. Yes, it means passing on guys like Leonard and Seattle’s Bobby Wagner, but among the players taken during that sixth-round flurry were J.J. Watt, Carolina linebacker Luke Kuechly and two-time reigning DPOY Aaron Donald of the Rams.

In other words, you’ll live.

Looking for IDP Rankings? Well look no farther than right here at FantraxHQ. Also, if you have questions about your IDP league or draft feel free to hit me up on Twitter @IDPSharks and I’ll do my best to help.

Are you digging on Gary’s IDP Draft Strategy? If so you need to head on over to the 2019 Fantrax Fantasy Football Draft Kit for more great strategy, analysis, and rankings.