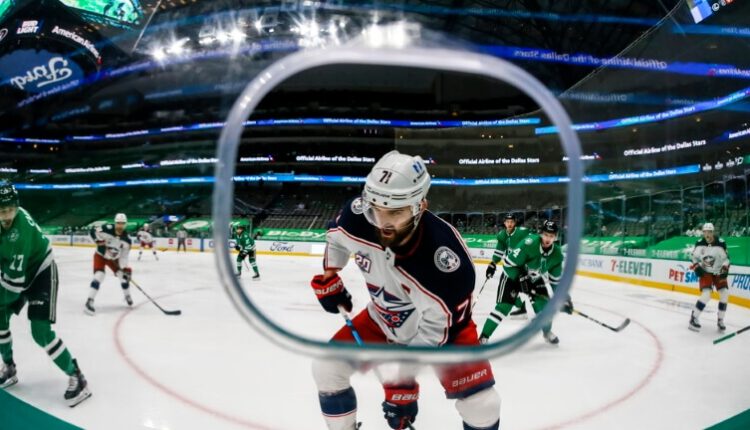 Welcome to the final waiver wire report of the 2020-21 season. Most leagues will be set to end May 8th, so there are only a few days left for weekly leagues to be able to make claims and drops. Fantrax allows leagues to extend their end date, so if your league has done that, be sure to load up on players from the Scotia North division to get some extra games in. Best of luck the rest of the way!

C/LW/RW Nick Foligno, TOR (43% Ownership): Foligno has made two appearances as a Maple Leaf, and notched an assist in each contest. He’s a player that can play anywhere in the lineup, but he’s currently on the top line with Auston Matthews and Mitch Marner. That alone gives any player a fantasy boost. Foligno gains extra value with his style of play. Three short handed helpers, 36 blocks, and 114 hits. He has 18 points in 44 games, but we’re likely to see a higher scoring Nick Foligno should he stay on that top line, making him a perfect fit in several league formats.

LW/RW Marcus Foligno, MIN (30%): Not the only Foligno on this list, as Marcus is worth claiming from the waiver wire too. He was sidelined for a month with an undisclosed injury, but he’s back and producing. He has two goals and two assists in his past five outings. With 20 points in 30 games, this marks his best scoring output since entering the league late in the 2011-12 season. In similar fashion to Nick, Marcus also dishes out the hits. He has 87 hits this season, throwing nearly three a game. He’s a great choice if you need some secondary scoring that can help in other areas, such as his 33 PIM and plus-17 rating.

C/LW/RW Sam Bennett, FLA (38%): Yes, Bennett was mentioned last week, but he continues to roll. His ownership doubled from last week’s 19%, as no player is getting picked up as much as him. In seven games with the Panthers, he’s found the scoresheet in six of them, for a total of 10 points. He has nearly doubled his point total since being traded. He’s centering Florida’s second line alongside Jonathan Huberdeau and plays on the top power-play unit. Bennett is getting ample time on that unit, nearly 23 minutes of ice time over the past four games combined. He looks like the real deal, and he’ll likely be claimed by one of your competitors if you leave him on the waiver wire any longer.

C/LW Yegor Sharangovich, NJD (25%): While most of the attention on this year’s rookie class has gone to the likes of Kirill Kaprizov and Jason Robertson (rightfully so), Sharangovich is having a solid rookie campaign as well. His 12 goals and 24 points rank him fifth in each category among rookies. Finding chemistry with Jack Hughes has given Sharangovich plenty of time on the Devils’ top line and a chance to succeed. Drafted in the fifth round in 2018, it’s looking like New Jersey found another late-round gem after getting Jesper Bratt two years prior.

C Nick Bonino, MIN (17%): Bonino has been on a hot streak lately, racking up 11 points in his last seven meetings. He’s primarily a bottom-six player for Minnesota, but he’s currently on the top power-play unit. The Wild have three games in the next four nights, so you might be able to catch some of his production before his offense slows down. He’d mainly be a target for those in deeper leagues.

RW Cole Caufield, MTL (44%): After winning the Hobey Baker Award, Caufield spent some time with AHL Laval, and worked his way up to the big club. He’s played one game so far, taking four shots in 15:40 of ice time. He played on a line with Tomas Tatar and Phillip Danault, while seeing time on the second power-play unit. There’s next to no chance he’s available in dynasty leagues, as they’ve been patiently awaiting his debut. Redraft and keeper leagues are a different story though. He’s a gamble, as it’s unknown whether he’ll remain in the lineup. Caufield’s pedigree as the 2019 15th overall selection makes him a high-risk high-reward play.

D Brett Pesce, CAR (44%): With 24 points in 49 contests, Pesce has produced notably better than last year’s 18 points in 61 games, making this the second-highest point total of his career. While he generally isn’t a point producer, he does have three points over his past four outings. He averages just over 23 minutes per game and can help in peripheral categories with his 72 blocks and plus-12 rating. Pesce’s next five matchups are against the bottom three teams in his division, so look for him to try and net a few more points there.

G Braden Holtby, VAN (56%): Holtby has had a rough go in his first year in Vancouver. He’s posted a 3.24 GAA and .904 save percentage. His record is 7-7-2, as he’s only appeared in 16 matches after Thatcher Demko won the starting job. However, with Demko out day to day, Holtby has started four of Vancouver’s five contests since returning to play. His save percentages in those games are: .949, .925, .929, and .926. He’s playing his best hockey as a Canuck, giving his team a chance to win every night. Demko is sure to come back and eventually make it a 50/50 split, but Holtby is considered the starter in the meantime. The Canucks have games scheduled out to May 19th. If your league extended its season beyond May 8th, then Holtby becomes an even more attractive option.