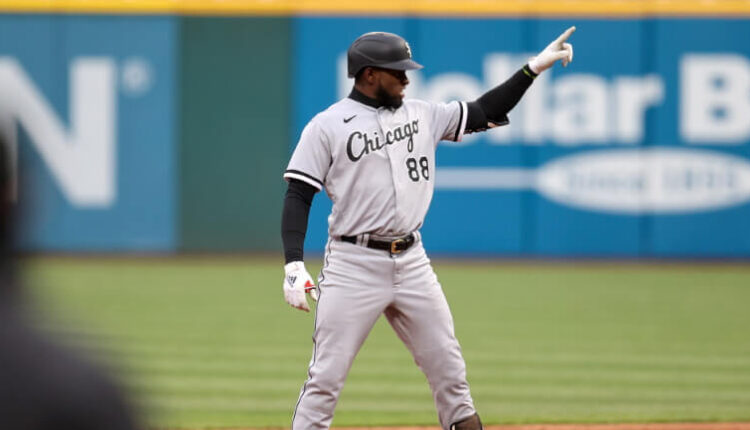 In-Zone Contact, or Z-Contact, as some may refer to it, is vital for a hitters success. If a hitter cannot make contact in the zone, it lowers their chances of success. For fantasy purposes, hitters with poor zone contact skills generally strike out at high rates and have a lower floor for success. Therefore, seeing a player makes gains on contact rates can be a great indicator that they could be in for a great season. While those players may be considered statcast standouts, several hitters are on the flip side of that. The contact rate fallers might be statcast standouts, but for a different reason.

With any data, it is important to take small samples into account. It is the reason why, for this series, I have really only focused on max exit velocity gainers and pitchers who have seen their velocity increase or have made pitch mix changes. But, when looking at contact rates, those begin to stabilize around 100 plate appearances, according to a study done by Max Freeze. Many hitters are beginning to hit that mark. Therefore we can get a fairly accurate measure if the gains are real for contact rates.

Luis Robert enjoyed a solid rookie campaign in 2020 that nearly led to winning AL Rookie of the Year. He slumped down the stretch in September and ultimately finished runner up to Kyle Lewis. Still, Robert finished the year with 11 home runs, nine stolen bases, and a .233/.302/.436 slash.

The biggest knock on Robert was his poor contact rates. Last season, Robert had a 61.4 percent contact rate, good for this worst among all qualified hitters. His swinging-strike rate of 22.1 percent was the worst in baseball. Robert also ranked sixth-worst among all hitter for in-zone contact rates. For those reasons, I expected Robert to see some struggles this season, much as he did last September.

But, Robert has made adjustments and made major strides in the contact department. To date, Robert has made the largest gain for in-zone contact percentage among all hitters. His 14.5 percent gain suddenly puts him in a respectable range. This helps justify his .305 batting average.

If Robert can sustain these contact rates, you can expect him to take a major step forward. His upside is that of a top-10 fantasy asset, which only helps push him in that direction. 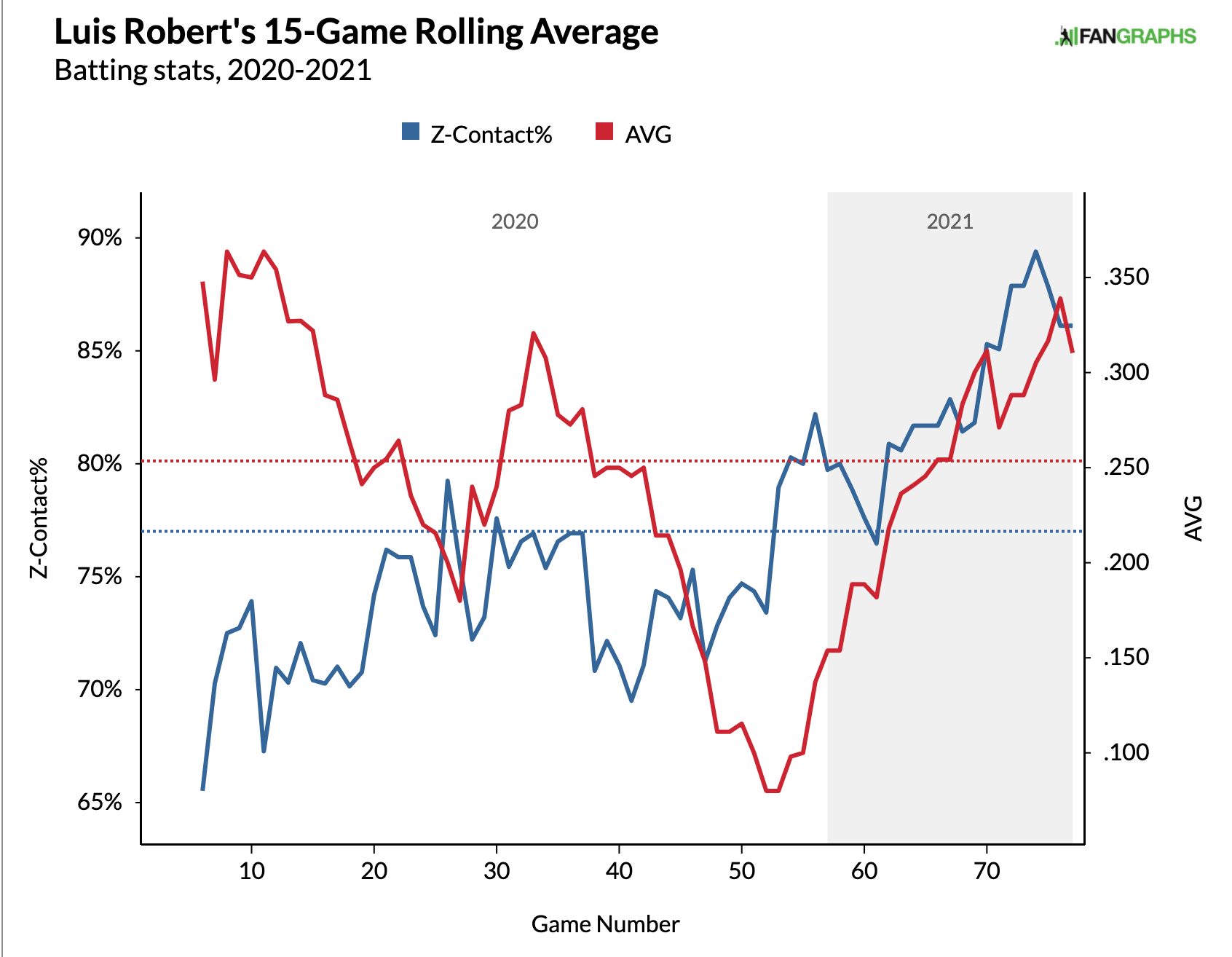 After a stellar 2019 season in Seattle, Omar Narváez appeared to be a great fantasy value in 2020. Unfortunately, his Brewer’s debut was rough as Narváez hit just .176 with two home runs across 40 games.

Narváez was undrafted in most leagues this year, but that has quickly changed. His .389/.477/.574 slash with three home runs has made him a fantasy relevant catcher. Narváez’s 2020 season looks like an outlier in the grand scheme of things as he is a career .272 hitter.

Coming in right behind Robert in z-contact gain is Narváez, who has improved his in-zone contact rate by 13.2 percent. Narváez has just 65 plate appearances on the season, so his contact rates may not have fully stabilized. But, the improvement is worth noting, as he has been a strong contact hitter in the past. It looks like 2020 may be an outlier for his career.

What happens when you take the best power/speed hitter over the last several years and give him Juan Soto’s plate discipline? You get the best hitter in baseball. Yes, I am sure this will get some criticism, but it is hard to argue against what Ronald Acuña Jr. is doing right now.

So far this season, Acuña has seven home runs, three stolen bases, and a .361/.460/.764 slash. His strikeout rate has dropped from 29.7 percent last season to 13.8 percent this season. This is largely thanks to improved contact and chase rates. In two seasons, Acuña has dropped his out-of-zone swing rate by 10 percent. That is a huge deal! His overall contact rate is up 14 percent, and his in-zone contact rate has improved by 11 percent since last season.

The increase in plate discipline and contact solidifies Acuña as the number one fantasy asset in my books. We knew the power/speed was legit. Now, it looks like he is capable of hitting for a .300 or better batting average. Watch out; the improved Ronald Acuña Jr is locked in and ready for an MVP caliber season.

It is quite interesting to find Nick Solak on this list. He is off to a hot start to 2021 with seven home runs, two stolen bases, and a .286/.375/.488 slash. Interestingly enough, Solak has seen his strikeout rate skyrocket and his contact rates tumble. Last season, Solak posted a 91.7 percent in-zone contact rate, one of the best in baseball. This season, that number has fallen by nearly 14 percent.

Because Solak is off to a hot start with poor contact rates, it shows his strong start can be sustainable. He has also been a strong contact hitter throughout his career, and I see no reason why he cannot get back near his career norms. If he does, the strong start from Solak should be sustainable.

Michael Conforto enjoyed a career-best season in 2020. He hit nine home runs, stole three bases, and hit .322. He posted a career-high BABIP of .412, which was over .100 higher than his career average. Regression was expected, but not to the extent that it has been in 2021. Conforto has just one home run and .214. 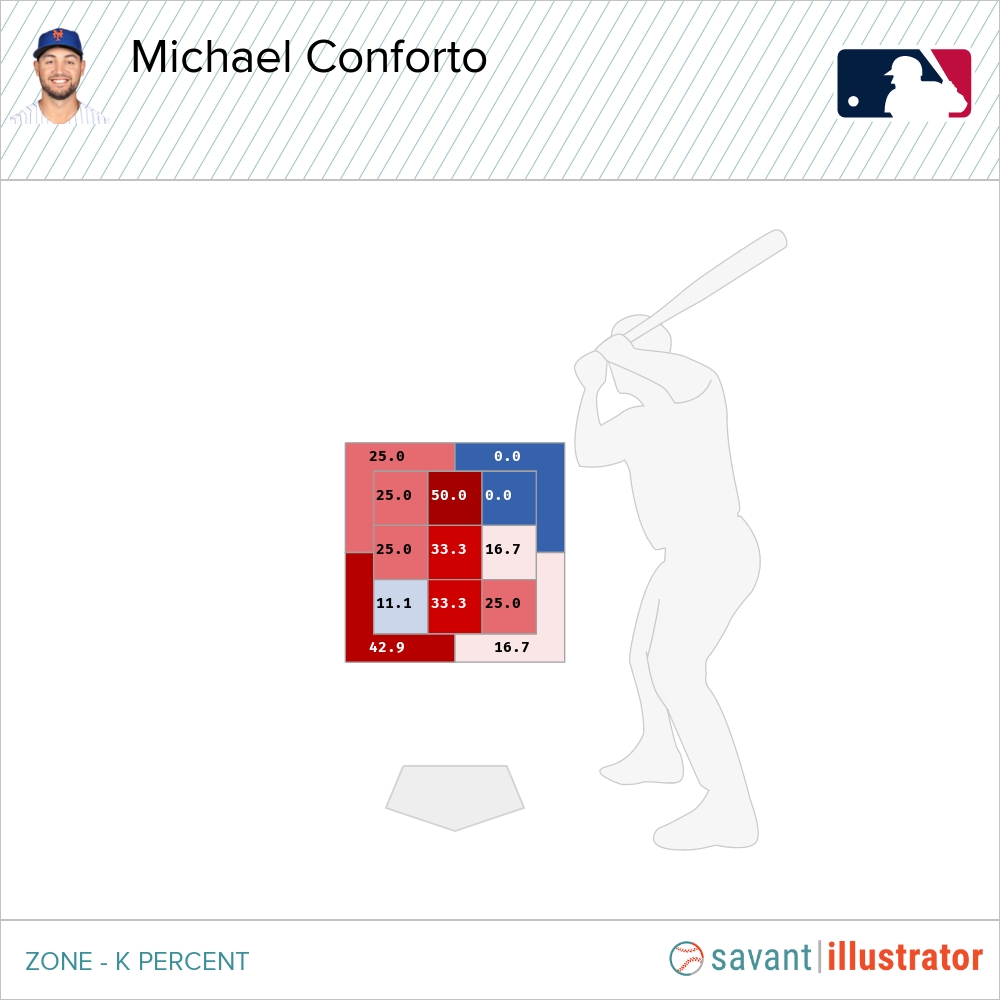 Conforto’s problem comes down to his struggle against fastball. Especially those in the heart and upper part of the plate. You can see his strikeout rate by zone in the image above.

Conforto will come around with time. He is not going to hit over .300, but he can be a solid fantasy asset. Don’t give up on Conforto yet.

From a pure counting stat standpoint, Javy Báez looks solid. Báez has shown an impressive display of power and speed with six home runs and five stolen bases. But, his .234/.272/.494 slash line is far from impressive.

Like Robert, Báez was in the bottom tier of contact rates. Robert has trended in a positive direction, Báez however, has tanked. His contact rate is an atrocious 53.7 percent, down from 63.8 percent last season. His zone contact rate has also dropped by over ten percent.

Among all hitters this season, Hiura has the lowest contact rate and second-lowest in-zone contact rate. On the surface, things look okay for Báez, but when you see his poor contact rates and his 25.9 percent swinging-strike rate, there are plenty of reasons to be concerned.

Be sure to check out Nathan Dokken’s latest Starting Pitcher Barometer to keep up with the latest around the league on the mound. Check back next week as we look at more statcast standouts.