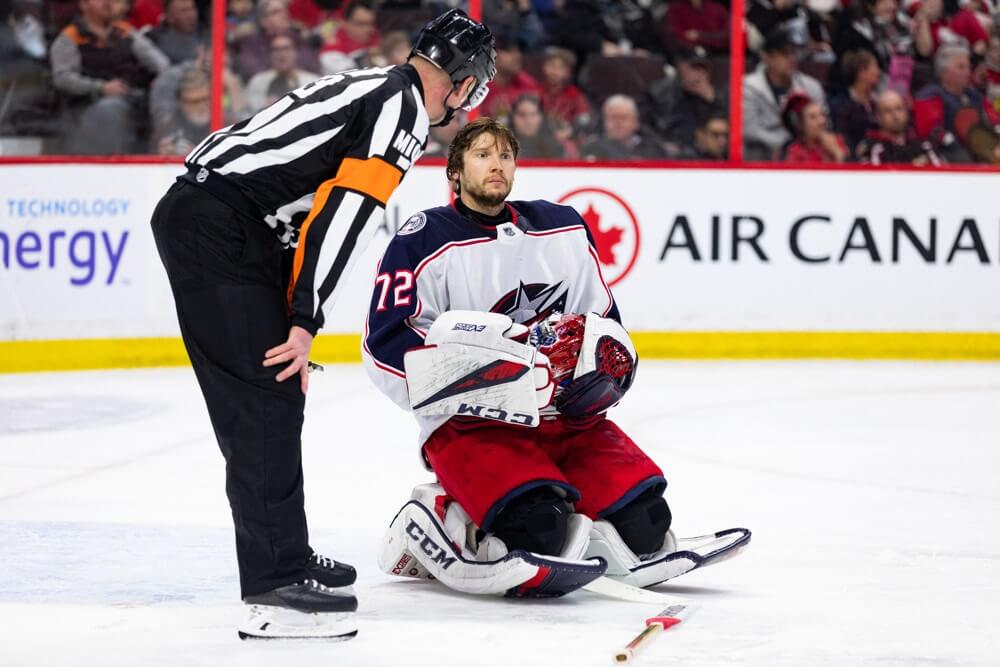 The NHL Trade Deadline saw some teams load up and others sell off. This week in the Fantasy Hockey Goalie Report we’ll take a look at the impact these moves made on the goaltenders.

Sergei Bobrovsky, CBJ: All the speculation of Bobrovsky leaving the Blue Jackets didn’t amount to a departure, at least not yet. It’s quite likely he leaves in the offseason, but for now his stocks gets a bump. Columbus went all in, acquiring Matt Duchene, Ryan Dzingel, and Adam McQuaid; while using Artemi Panarain and Bobrovsky as self rentals. Surely this will amount to a few extra wins for Bobrovsky. Columbus is in the thick of the playoff race, so don’t expect Bob to be given many nights off.

Keith Kinkaid, CBJ: Also acquired by the Jackets was Kinkaid. There was a logjam in New Jersey with Cory Schneider and MacKenzie Blackwood in the picture. It’s still crowded where Kinkaid got moved to, as he has Sergei Bobrovsky and Joonas Korpisalo in his way. Kinkaid might not see an increase in starts (in fact he could see fewer), but his 3.36 GAA and .891 save percentage should improve with a more talented squad in front of him. He also has more appeal in dynasty leagues, as it’s possible he could form a tandem with Korpisalo next season should Bobrovsky move on.

Malcolm Subban, VGK: The acquisition of Mark Stone makes the Golden Knights a much better team, making life a little easier on Subban. Yes the same applies to Marc-Andre Fleury, but there’s a reason Subban gets the higher rise in value. The Knights are firmly in the No. 3 spot in the Pacific division. The Calgary Flames and San Jose Sharks have widened the gap between themselves and Vegas, meanwhile the Arizona Coyotes will be hard pressed to climb up to third. Therefore, Fleury likely gets rested down the stretch. He already leads the league with 55 games played, and if they hope to go on another playoff run, Fleury will need to take some nights off. Enter Subban, who will receive more starts with a stronger team in front of him.

Craig Anderson & Anders Nilsson, OTT: The Senators sold off their top three goal scorers, resulting in a much weaker lineup on the ice. Anderson and Nilsson already had a tough enough time sealing victories for the league’s last placed team. Now winning a game becomes an even greater task. Since the deadline, the Sens have lost twice while being outscored 11-4. It’s hard to imagine it getting better anytime soon, so it’s best to avoid the Ottawa goalies altogether.

Henrik Lundqvist, NYR: The Rangers were sellers at the deadline, shipping out Kevin Hayes, Mats Zuccarello, and Adam McQuaid, while only receiving Brendan Lemieux in terms of NHL bodies. Lundqvist holds a 17-17-9 record and could wind up with a few extra losses as a result of the deadline deals. There’s also Alexandar Georgiev in the mix, with each goaltender starting five of the Rangers past ten games.

Jimmy Howard, DET: The Wings were also sellers, trading away Gustav Nyquist and Nick Jensen. Detroit is unlikely to scare many teams down the stretch, as they sit 29th in the overall standings. The kicker here is that Howard was on the trade block for quite some time, but was ultimately never moved. He could have seen a spike in his value, but instead, he’s in line for a decrease.

Carter Hart, PHI: The rookie is roughly halfway through his initial 10-day timeline to return from his ankle injury. In the meantime, Brian Elliott has taken the reigns back as Philadelphia’s starter. He’s won two of his five games, posting a .931 save percentage. It’s possible he keeps that role once Hart returns. They also have Cam Talbot in the fold, meaning the Flyers will likely ride the hot hand at the time.  If you have Hart on your team, it’d be wise to snag Elliott as a handcuff, and maybe Talbot should he string together a few wins. Philly will take on the Capitals and Islanders this week.

James Reimer, FLA: Reimer projects to miss at least a week with an undisclosed injury. The Panthers still have a very capable Roberto Luongo to patrol the crease. Samuel Montembeault was called up to serve as Luongo’s backup. Luongo will surely start as often as he can, but the Panthers have a back-to-back this week, meaning Montembeault could get his first career NHL start.  Florida will face the Penguins, Bruins, Wild, and Red Wings this week.

NHL Team with the Fewest Games

There are just a few teams with a two game schedule, those being the Chicago Blackhawks, Nashville Predators, Philadelphia Flyers, and the San Jose Sharks.