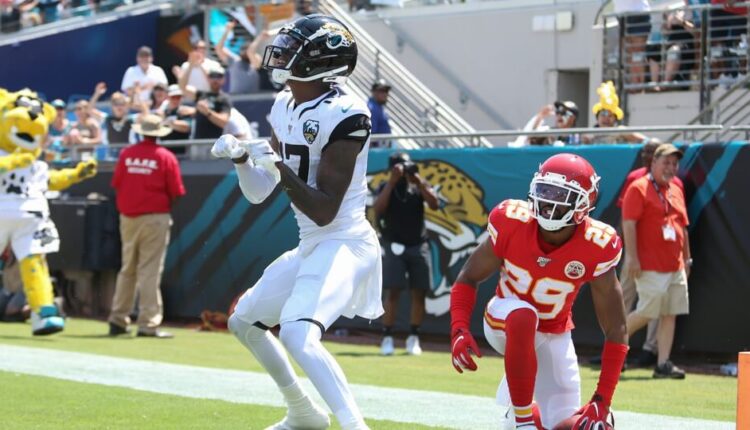 After a ton of great waiver wire options the first three weeks, the Week 4 waiver wire is probably the worst selection of players that we’ve had. That means it’s time to be patient with your waiver claims and to use your priority selectively. If you happen to be high up on waivers, just wait for another week. With that said, some of you surely suffered setbacks this week and it will be imperative to find some starters. If that happens to be you, LISTEN UP!

If you have any comments or questions reach me on Twitter @Bartilottajoel.

Waiver Wire Quarterback of the Week

The Giants made a major splash at the NFL Draft when they took Jones with the sixth-overall pick and he’s already quieted the haters with an incredible performance in his debut. Jones got his first start against Tampa Bay in Week 3 and rewarded his fan base with 336 passing yards and four total TDs. Two of those were in the air and two were on the ground, as it actually led to an epic 18-point comeback in one of the greatest debuts in NFL history.

That’s a heck of a performance in front of one of the most judgmental fanbases in the country and it says a lot about how good this kid can be. The stellar passing numbers paired with his ability to provide on the ground makes him a fantasy asset going forward and he now finds himself in my Top-20 at the QB position. The absence of Saquon Barkley should only add to his volume, as this offense is fully in his hands now.

Wilson is a must-add in every standard league, as it’s becoming evident that he’s the goal-line back for the 49ers. The two TDs in Week 2 appeared to be an aberration but he actually matched that with another multi-TD performance in Week 3. The simple fact is, he’s getting all the work in the red zone and it’s likely going to lead to double-digit touchdowns. It’s not going to be pretty when you consider that he’s in a timeshare and unlikely to see double-digit carries but he’s definitely worth considering anytime the 49ers have a favorable matchup.

This is totally dependent on the status of Saquon Barkley. Early reports have him missing 4-8 weeks because of an ankle sprain and that would automatically make Gallman one of the top pickups of the week. We’re talking about someone who will be filling in for an every-down back. While it’s unclear if this will be a committee, Gallman will surely lead the way after playing 41 snaps in Week 3.

Back in 2017 before Saquon was in the picture, Gallman had 476 rushing yards on 111 attempts while providing 34 receptions for an additional 193 yards. Those are pretty solid numbers from a guy who averaged 13 fantasy points per game in the final four games of 2017, despite not scoring a TD. The fact that he had at least six catches in three of those four games indicates that he’s ready to take on that Barkley role, as he could be looking at double-digit carries and a handful of targets in every game without Saquon.

This is probably my favorite pickup of the week. Dating back to last season, Dorsett has five touchdowns over his last six games. What makes him such a valuable pickup this week is that this wide receiving corp is as beat up as ever. Not only is Antonio Brown out of the picture, but both Julian Edelman and Josh Gordon got nicked up in Week 3. While neither is considered overly serious, Dorsett could find himself on the field every-down if one or both miss any time. That was evident when he led the team with 71 snaps in Week 3.

That increase in usage would be huge for a guy who’s already got 13 receptions for 187 receiving yards and three TDs so far this season, making him a Top-20 WR. The matchups are brilliant the next few weeks too, with Dorsett and the Patriots facing the Bills, Redskins, Giants, Jets, and Browns over the next five weeks.

Many people may be forgetting about Chark since he played on Thursday night but that makes him a sneaky pickup this week. The main reason we like him is that he’s established a beautiful rapport with Gardener Minshew. Not only is he playing about 80 percent of the snaps, but he also ranks second on the team with 18 targets. That’s led to him collecting 15 receptions for 277 yards and three TDs, which all lead the team. That means his usage will only rise from here on out and it’s just a matter of time before he becomes an every-down WR for this growing offense.

Finding tight ends off the waiver wire is comparable to finding leftover fast food in your fridge but every once in awhile, you stumble across a treasure. We hope that’s what we have here with Dissly, putting up brilliant performances in two of his three games this season. In fact, Dissly now has 11 catches for 112 yards and three TDs over his last two games, establishing himself as Russell Wilson’s number-two option.

That looks even better when you consider his role, with Dissly ranking second on the team in targets in that span while playing at least 46 snaps in back-to-back games. That’s backed up by his 156 receiving yards and two TDs across four games last season and it’s becoming clear that as long as Dissly is healthy, he’s a trustworthy tight end.

Golden Tate (NYG): It’s very possible that Tate will be the top receiving option in New York once he returns from suspension in Week 5 and that’s a welcome sight for a revived passing game.

Ben Watson (NE): The Patriots are notorious for using their tight ends vigorously and Watson is expected to be the top TE on the roster once his suspension is over after Week 4.

While neither of these guys returns until next week, now’s the time to pick them up in order to get ahead of the field.

Darrell Williams (KC): If LeSean McCoy and Damien Williams are both out, this other Williams is definitely worth a speculative add

Justin Jackson (SD): Jackson has an impressive 142 rushing yards on 18 attempts this season and could see double-digit carries against a putrid Dolphins defense on Sunday. He’s also a great handcuff to Austin Ekeler.