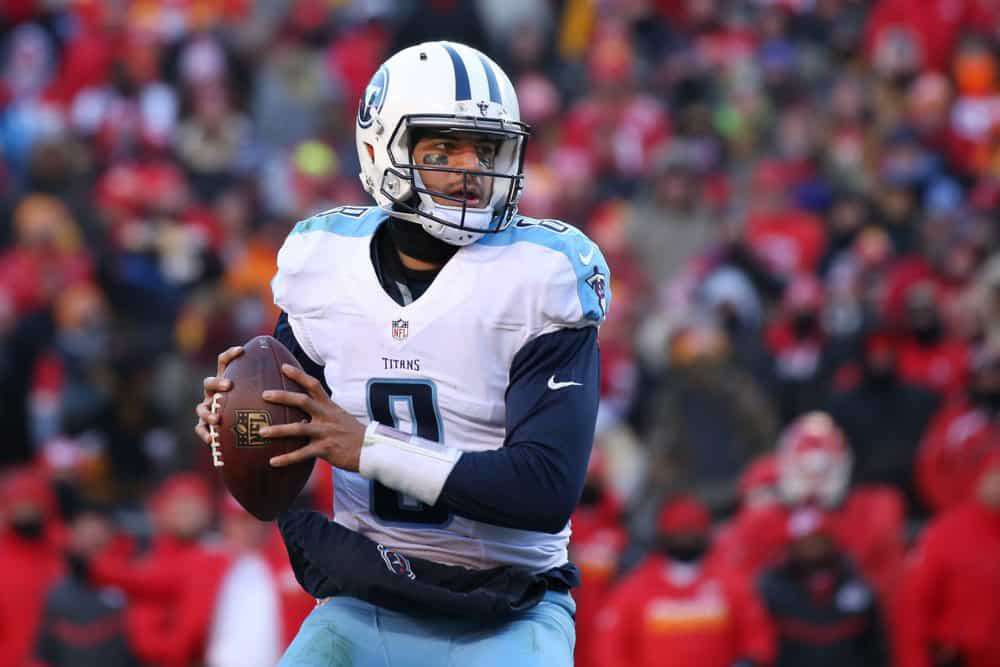 Sometimes your draft doesn’t go to plan, and sometimes people just don’t listen. So guess what, it seems like drafting a quarterback early is still a thing. With a week or so to go, people are making one of two mistakes: panicking in the fourth round (or earlier) and drafting Aaron Rodgers, or hedging their bets by drafting two quarterbacks in total. Crazy, right? I’m not saying either of these strategies is bad, but you’re missing out on some serious talent.

Anyway, moving down is Tom Brady from the second spot to the third. Andrew Luck’s injury also sees him take a dive, while Kirk Cousins moves up and Ben Roethlisberger falls out of the Top 10. What’s that sound? Oh, the hate mail piling in.

He led the NFL in touchdown passes for the first time in his career last season. He was also a late MVP frontrunner in perhaps his most awful of awful seasons. I’ve ranked Rodgers ahead of Brady partly because of his wide receiver pals, but also because he had four games last season with three touchdowns and no interceptions. Yeah, that’s pretty Brady-like, but this could really be the, um… prime year, for Rodgers?

It’s hard to know what to call it, considering he seems to outdo himself every year. Really, though, the cream on the cake is Rodgers actually playing in preseason snaps. Last season, he entered the regular season cold turkey, but he’s already thrown for 49 yards and a touchdown in just a handful of snaps. The depth on the offensive line is a concern, especially considering right tackle Bryan Bulaga missed Saturday night’s game with an ankle injury. Still, Rodgers has never had killer protection, so easy come, easy go.

The defense has stolen center stage so far, but mmph, Brees has looked good. Michael Thomas has put up 72 yards on seven receptions over the last three preseason games, and the addition of Ted Ginn Jr. replaces the deep threat that Brandin Cooks left behind. More notably, Brees will become the third quarterback in NFL history to throw over 70,000 yards sometime this season, and as if that number weren’t big enough, Brees has averaged 4,887 yards per season in all 11 years with the Saints. We talk about age with Brady, but Brees is 38, let’s not forget. He’s the kind of quarterback that just breathes consistency, and after finishing as one of the Top 6 Fantasy QBs over the past 11 years, there’s not much else to say.

[the_ad id=”384″]I could quote a lot of stuff about how Brady is nearly 40 years old, but the Julian Edelman factor is a huge bummer. For sure, Brady makes even the plainest of wide receivers look like freaks, but more realistically, he’s pretty gentle when it comes to fantasy points. Brady was the 15th-ranked quarterback after he served his time last season, and even though he’s not slowing down anytime soon, there’s no doubt the offense will have to make some adjustments. Adding Brandin Cooks to the mix is certainly a big deal, and really, this is still the best set of pass catchers Brady has seen in his career. He completed 67.4% of his attempts last season, and if Rob Gronkowski can put in a full season while Cooks adjusts to a much higher workload, there’s no telling what the Patriots’ ceiling might be.

Lucky Matt, he’s finally free from his leash. The Falcons are said to be allowing Ice-Ice Matty more control at the line of scrimmage this season after he was told to stay mute by former offensive coordinator Kyle Shanahan last year. The results so far in the preseason look pretty encouraging, but speaking of positive signs, the Falcons offensive line ain’t no joke. Atlanta’s line allowed just 33 hits and 25 sacks on Ryan last season, and since 13 different Falcons receivers caught a touchdown pass, I’d say the chances of a repeat MVP kinda season are pretty high.

High on expectations, that’s for sure. I suppose it’s hard not to trust an offensive line that allowed the seventh fewest sacks last season, and if you couple that with the trio of receivers the Titans added in the draft, all of a sudden you’re looking at a potential top-three fantasy quarterback that should be drafted very, very highly. There are the injury concerns to take into account here, but the addition of wide receiver Corey Davis just makes this an even more enticing pick. DeMarco Murray also racked up 377 receiving yards and three TDs last season, spoiling Mariota for target options even more. If you can pick the match ups correctly, Mariota is a fine choice as a standalone QB.

So many “what ifs.” The season hasn’t even started and Luck is already missing time. And if isn’t the shoulder thing, it’s the missed workouts, the limited training camp, or the diminished offensive line that is now minus Ryan Clark. Luck was sacked a career high 41-times last year, but for the sake of T.Y. Hilton owners, we sure hope he stays in his cleats. That is if we see him anytime soon.

All of this depends on who Cousins is throwing to. A healthy Jordan Reed makes a world of difference, and if he works on his short-yardage game more, Cousins is legit. He had only a 58% completion rating with 1-3 yards to go, so less downfield stuff, please. On the flip side, this is your sleeper. He’s going way late in drafts, and since a lot of people don’t value him as a Top 10 guy, you can guarantee he’ll slide under the radar. Keep in mind that Cousins finished in the Top 7 in rushing TDs by QBs, passing yards, passing attempts and completion percentages last season. There’s also some guy called Terrelle Pryor Sr. now in Washington, so I think that helps, right?

Putting money on Wilson having a MUCH better season in 2017 is a pretty safe bet. He suffered three injuries in the first half last year, and after becoming a shell of his former self, we should see him running around like a madman again out of the pocket. Wilson certainly isn’t your best shot at fantasy glory, but he is a solid middle-of-the pack pick that could find some help from not only Eddie Lacy, but the sure-as-hell money man Doug Baldwin.

There are certain players that you can just trust right away, and Cam isn’t one of them. He hurt way too many fantasy owners last season, and although the offensive line can partially take the blame, Newton also completed a career low 52.9% of his passes. There’s the dodgy rotator-cuff and all, but if you draft Newton, just make sure you have a noteworthy backup as Plan B. I will say this, though, picking favorable WR/CB matchups when Kelvin Benjamin is involved could be a worthwhile strategy.

The Bengals are a firm running team. See Jeremy Hill, Joe Mixon and Giovani Bernard if you don’t believe me. They also have a shockingly bad offensive line. Even with all that going on, Dalton still managed to put up a 4,000-yard season last year. He now enters his second season with offensive coordinator Ken Zampese, and the return of A.J. Green can only be taken as good news. Most importantly, though, the Bengals ranked fourth in rushing attempts last season, but Dalton still managed to attempt 563 passes, the second most in his career. He’ll throw the odd pick here and there, but if you really are a late round QB kinda guy, Dalton will fall into your lap.