Five Reasons to be Optimistic About Byron Buxton

Aside from Byron Buxton’s first three home run game of his career on Sunday, he’s been garnering fantasy owner’s attentions for much longer. Trying to emerge from his top prospect shadow can be difficult, but it’s easy to see his defense warrants all the attention it receives. However, his bat’s still under development. Buxton flashed a glimpse of a potential breakout last September but failed to cash in on it during the first half.

Once again, he’s streaking. Although it’s during the second half and starting in August this year, Buxton’s again either in the midst of his long-awaited breakout or providing a tease for owners to overpay in preseason drafts next March. Through 111 games this season, Buxton’s scored 52 runs with 13 home runs, 37 RBI, 24 stolen bases and a .249/.311/.404 slash line. Numbers that do not jump off the page. However, as the most recent recipient of the American League Player of the Week award, Buxton’s doing much better of late. What’s fueling it, and, more importantly, can he sustain it?

Due to Buxton’s prospect status, getting him at a discount in a fantasy draft proves difficult. Especially when he surged for nine home runs in 101 at-bats last September, scoring 24 runs, driving in 22 and hitting .287/.357/.653. This seemed like the Buxton the Twins and fantasy owners alike pined for. However, beneath these numbers, Buxton still struck out 33.6 percent of the time during this 29-game sample with only 10 walks (8.8 percent). Yes, his isolated power rose to an impressive .366 and his on-base plus slugging percentage exceeding 1,000 made him a potential and much-hyped breakout candidate.

He cratered at the start of the season with bumps and bruised accumulating along with strikeouts. Buxton also landed on the disabled list in mid-July with a groin injury. Prior to his injury and since his return, Buxton’s been raking. During the second half, Buxton’s played 28 games with 23 runs, eight home runs, 21 RBI, eight stolen bases and a .333/.370/.657 slash line. Once again, his isolated power spiked to .323, and Buxton’s 165 weighted runs created plus ranks 12th for all major league hitters with at least 100 plate appearances. In an effort to see what’s happening beneath the numbers, a look at his underlying peripherals could shed some light on if he’s breaking out or is simply a streaky player.

[the_ad id=”384″]After some early-season struggles, Buxton’s rebounded of late. For the year, he’s improved his strikeout percentage, lowering it almost seven points compared to last season. Buxton’s also increased his walk percentage by one and his contact rate by five percentage points. In addition, he’s reduced his swinging strike percentage by 2.1 percent in 2017.

Shifting to the second half, Buxton’s striking out 23.4 percent of the time with only a 5.4 percent walk rate. It’s apparent his patience still needs some work, but it’s a far cry from the over 33 percent strikeout percentage from last September. So, there’s hope for further development. It’s worth noting that Buxton’s probably not going to morph into a low-strikeout player, but a range of 20-to-23 percent is much more tolerable going forward than one over 30 percent.

Things get interesting here since Buxton’s data is all over the place. During August of this season, Buxton is hitting ground balls and fly balls 38 percent of the time each. He’s not a real part of the fly ball movement just yet, but it’s worth noting the even dispersal of the two outcomes so far this month. In September of last year, Buxton did hit fly balls 41 percent of the time with a ground ball percentage of 35 percent to end his season. He pulled the ball 56 percent of the time and carried this over to the first half of 2017.

However, this time, his power’s being supported by pulling the ball less often. Since the break, Buxton has reduced his pull percentage by over 12 percent yet grown his home run per fly ball percent by 21 percent compared to the first half. Due to the variance in his statistics along with the mixed results, it’s going to be very difficult to predict his outcomes for next year.

In order to gain a larger statistical data base, using Fangraph’s last 365-day statistics could present a clearer picture of Buxton. He’s played 140 games in this time frame with 76 runs, 22 home runs, 59 RBI, 25 stolen bases and a .257/.321/.459 slash line. His strikeout percentage of 29.8 percent with a walk rate of 8.1 percent affirms the concerns above, but his second half does provide hope he’s evolving at the plate in regards to discipline. Here’s his spray chart from the last 140 games courtesy of MLBfarm.com. Note the power to the opposite field. It will be important for his success in 2018: 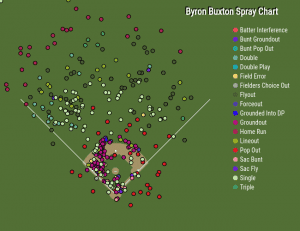 Players with at least 20 or more stolen bases with a worse strikeout percentage include Keon Broxton, who represents who fantasy owners do not want Buxton to mirror in terms of streaky production. Broxton’s 37.8 strikeout percentage over the last statistical year with an 8.3 walk percent yields a .229/.304/.452 line. Less than ideal.

Focusing on the improved contact, lower swinging strike percentage and varying outcomes in terms of power, Buxton’s still on the upswing in terms of his development. With 20/20 players disappearing in the game, this skill set along with his defense will keep him in the lineup. With this in mind, what’s a reasonable outcome for next season?

With deference to how Buxton will finish the season, no hard numbers will accompany a projection at this time. However, using his last 365 days as a baseline can prove to be helpful. Buxton’s probably not going to hit for a high average like someone like Jose Altuve due to the disparity in their styles and contact rates. But, Buxton’s speed will help him increase his average, and he could move into the .260-to-.270 range next year.

Watching his last five weeks of the season closely will also help to figure out where he may hit in the lineup for 2018. Due to injuries, Buxton has ascended to batting third in the order of late, and hitting higher in the order will mean more in the way of runs and RBI due to more at-bats. Being a bit more reliable in terms of fantasy would be a boon for future production, and with his defense being stellar, Buxton could be more similar to Devon White than many think.

Devon White hit .263/.319/.419 during his career, with 13 seasons with double digits in both home runs and stolen bases. White recorded at least 20 home runs two times and stole 20 or more bases in eight seasons. Buxton possesses more upside in terms of talent on offense, but for next year, his numbers over the last 140 games with slight improvement in discipline could mean a very strong 2018.

It’s much too early to forecast 2018 as the year Byron Buxton breaks out. But it could be another step in the right direction. With 150 games, he can record a 20 home run and 30 stolen base season, especially if he improves his average against right-handed pitching (.225/.276/.382 this year). There’s much to like about Buxton moving forward, but there are also things to watch in terms of his development that will factor into how much of a ceiling he owns in the future. Patience could pay off for those who invest in Buxton, but it will also be necessary.