Fantasy EPL Gameweek 25: EPL Points Against… A Strategy For Streaming 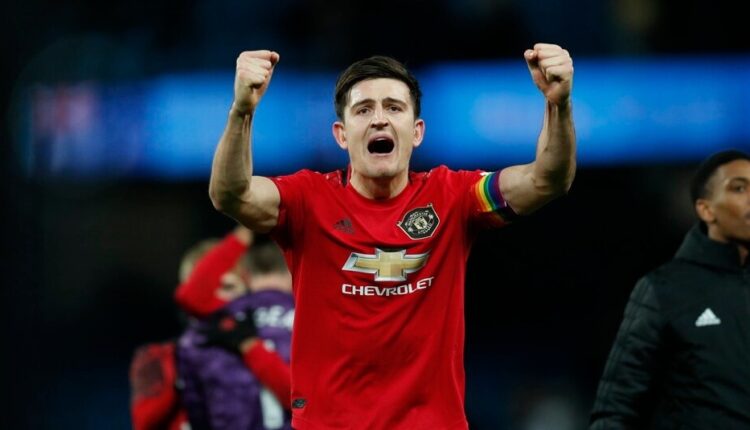 A common draft strategy voiced during pre-season was to not waste a pick on a goalkeeper. Or at least not to waste a high/moderate pick (i.e. first 10 rounds). This is something I strongly believe in. Goalkeepers for the big teams often face few shots and are therefore very reliant on clean sheets for their points, whilst goalkeepers for the small teams are, clearly, at risk of conceding a lot and therefore actually ending with negative points. I felt the agony of this dilemma first hand a few weeks ago. I picked up Ederson (a player many people drafted high up!) as a free agent as he was facing Aston Villa away. At 6-0, heading into injury time, the clean sheet points were about to give me a massive 137-134 win against a title rival. Then the penalty happened. Ederson ended on -2 points and I lost. That week, 11 different keepers scored the 6 points that would have given me victory, including 5 that did so without getting a clean sheet.

Finding the happy medium is a very difficult task, but doing so – as you can see from this experience – can be the difference between winning and losing (and potentially a league title!). One strategy that can help is to pick up goalkeepers on a week-by-week basis (“streaming”) by looking at EPL Points Against.

EPL Points Against calculates how many points a position, in general, is averaging against a particular team. For instance, if the first 10 goalkeepers that faced Arsenal this season scored 2.25 points, 0, 16.25, 8, 0, 0.25, 6, 0, 11, and 4, then the EPL Points Against at that point would have been 4.78. It is essentially putting objective values to things that we already think of when making defensive decisions: “Newcastle has Norwich at home this week, and the Canaries have scored just six goals on the road…does that make Dubravka a solid choice?”

But who to get? A buddy in my league, despite spending the whole summer admitting that I was right and that he would go for the streaming strategy, took Alisson in the seventh round. His explanation was that he didn’t want the hassle of having to research who to get each week; the hassle of having to dig into the numbers; looking at opposition, past scores, trends, and many of the other things that could influence a goalkeeper’s points potential. It was a fair response. But he didn’t bank on these articles being written…

As mentioned in a previous article, rather than just giving out advice without any sort of accountability, I will instead be taking a brief look back at my predictions each week to assess how I fared. Here is who I predicted to produce the goods in gameweeks 20, 21, and 22, based on EPL Points Against:

Nick Pope (0 at home to Manchester United, 4 at home to Aston Villa, 4 away at Chelsea)

United had a rare clinical day on the road back in Gameweek 20 which put paid to Pope’s chances of a good (or even average) score. Remarkably he’s only the second keeper (out of 12) to score less than six in a home matchup against the reds. He also had below-average returns at home to Villa and then away at Chelsea, though 4 points for a free agent goalkeeper pickup is never going to lose you a match. For anyone who did follow this advice and brought in the Burnley man, I hope you stuck with him after these fixtures! England’s number one (??) has had a couple of unbelievable games, scoring 21.25 at home to Leicester and then 22.25 away at Manchester United. These are the 10th and 5th highest scores by a goalkeeper in a single gameweek this season.

It’s safe to say Foster had a slow start to the season. After seven games he’d scored just 8.75 points. Since then, he’s scored more points (152.25) than any other goalkeeper in the league. Backing a goalkeeper at home to Villa is to rely quite heavily on a clean sheet…fortunately Foster didn’t let us down.

An 84th-minute equalizer was a big blow to Norwich fans, and also any Krul owners out there. A potential 12.25 points suddenly became 2.25, but that’s the life of a goalkeeper in fantasy football. Palace at home has a good EPL Points Against, but the variation in scores has been very large, so in some ways, it could have been worse (three goalkeepers have actually had negative returns!).

New manager, same old West Ham. That said, if Robert Snodgrass’s injury-time equalizer hadn’t been controversially disallowed then this would be eerily similar to the situation above. But it was, and so we can rejoice in getting a prediction right. 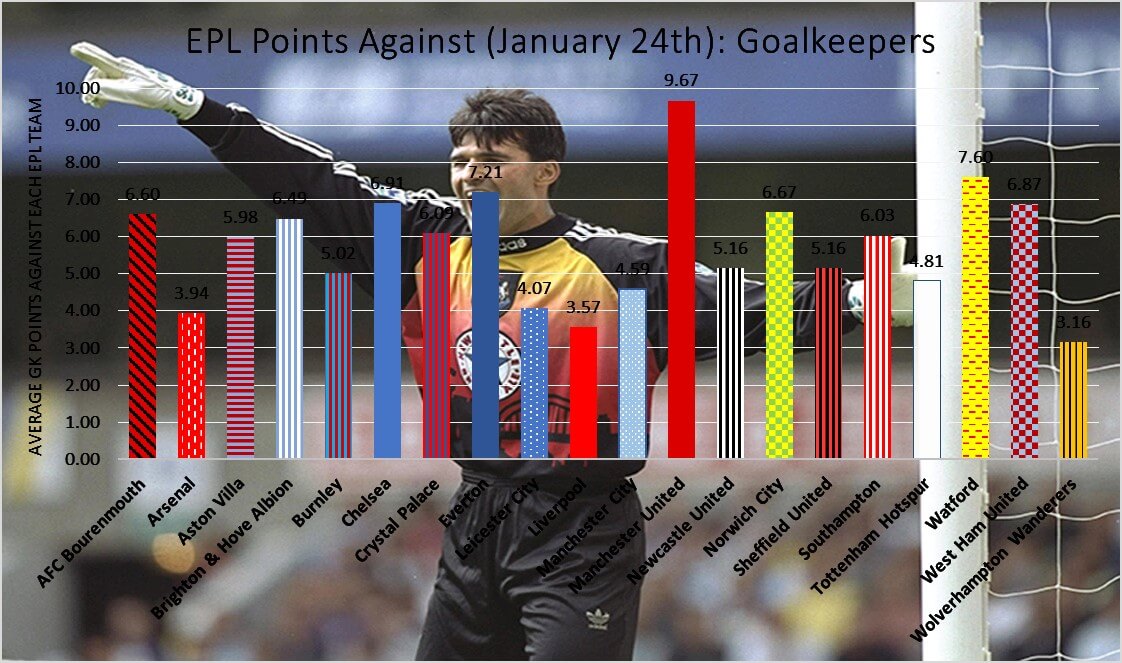 Manchester United retain their crown as the best team for goalkeepers to face according to EPL Points Against – though remember, there is a huge home-away split here in favour of home. At the other end, we have a new number one for “worst team” for goalkeepers to face. Wolves have now edged ahead of Leicester and Liverpool, whilst Arsenal are now starting to creep into consideration too. Interestingly, Chelsea have one of the highest EPL Points Against when facing them at Stamford Bridge (9.77), and one of the lowest when facing them at the goalkeepers home ground (4.04). Sheffield United have a similar pattern, but to a lesser extent.

Dubravka’s ownership is finally starting to reflect that of the best goalkeeper in the game (at least, fantasy-wise). 183.50 points at 7.65 per game is sensational stuff from the Newcastle shot-stopper, and as I showed in my last article, something that nobody really saw coming! Hosting Norwich has yielded double-digit returns six times, and is one of the few scenarios which has yet to lead to negative points either. This is the sort of game you can see Newcastle winning 1-0, and if they do, it’s likely Dubravka will have done very nicely.

There’s a chance that undisputed Hammers number 1 Lukasz Fabianski (39% ownership, FP/G = 7.75) could return in time for gameweek 25, either way, the EPL Points Against suggest a nice matchup at home to Brighton. Graham Potter’s men like to attack (7th most shots per game in the league) and will fancy their chances against a struggling West Ham. This could mean that the clean sheet (whilst obviously a huge bonus) isn’t necessarily required for Randolph/Fabianski to score well. Oh, and this is absolutely must-win for David Moyes given their brutal seven-game stretch afterward…does that make this a better or worse scenario? I’m not sure.

Why oh why am I backing Kepa again. The Chelsea man has scored above average just five times in 24 games and has the 28th best FP/G amongst all goalkeepers in the league. And yet…he’s facing Manchester United at home. That’s an EPL Points Against of 13.42! And now United are without Rashford too. The United ship has barely been afloat all season long (or since Sir Alex retired for that matter), but now it really does look like it’s about to sink. As mentioned earlier, only two keepers out of 12 have scored fewer than 6 points in a home game against Ole’s men…will Kepa make it a three from 13?

Sheffield United host Bournemouth in Gameweek 25; the biggest over-performers of the season versus one of the biggest under-performers of the season. If Bournemouth fails to beat Aston Villa in Gameweek 25 then the (debatably fortunate) win against Brighton recently might just have been one-off, which makes this matchup even more enticing. Six of the twelve goalkeepers to have faced Eddie Howe’s side have scored 12 or more points, which bodes well for Henderson.

You just KNOW that Jose has already started his preparation for this one. Tottenham away at Stamford Bridge? This has got Mourinho masterclass written all over it. And that makes Hugo Lloris a very nice prospect for Gameweek 27. After “United at home”, “Chelsea away” is the next best scenario for a fantasy goalkeeper (that seems a very strange sentence to type!). An EPL Points Against of 9.77 is big, and it’s pretty consistent too – the lowest score a goalkeeper has returned when taking on the Blues is 2.25, whilst six have returned double-digits.

Last but not least is Rui Patricio, who faces Norwich City at home. I won’t repeat the Dubravka blurb above – though much of that obviously applies again – the main reason to back him is that Wolves is really, really good. And by this point they may have Willy Boly back in the team. The only concern is that this fixture is wedged between their Europa League tie against Espanyol, and whist Patricio surely won’t be rested, a few key defensive pieces may be. If Wolves play their strongest side, pick him up. If not, there are a fair few good alternatives for Gameweek 27.

(Note, targets only include goalkeepers owned in less than 75% of leagues. This removes Alisson, Schmeichel, Leno, Ederson, de Gea, and Pickford from selection).

Some absolute monster scores put up by goalkeepers in Gameweek 23. Gazzaniga, Allison, and Pope all scored over 20 points – there had only been 10 instances of that all season prior to this. And then, as if to reset the balance, Gameweek 24 saw six goalkeepers return negative points. This has only happened once before this season – way back in Gameweek 3.

So that’s it for Gameweeks 25 to 27. The EPL Points Against suggest that you should be targeting the likes of Manchester United, Norwich, and West Ham at home and Chelsea, Everton and Watford away. Steer well clear of Wolves, Leicester, and Tottenham on the road, and Liverpool anywhere! Some specific suggestions have been given above, but even I’m not entirely convinced that I should be backing Kepa! Good luck!

For any of the data used in this article, please feel free to get in touch with me via Twitter (https://twitter.com/the_innergeek). Predominant sources used include www.understat.com, www.premierleague.com, www.sofascore.com, and www.whoscored.com.