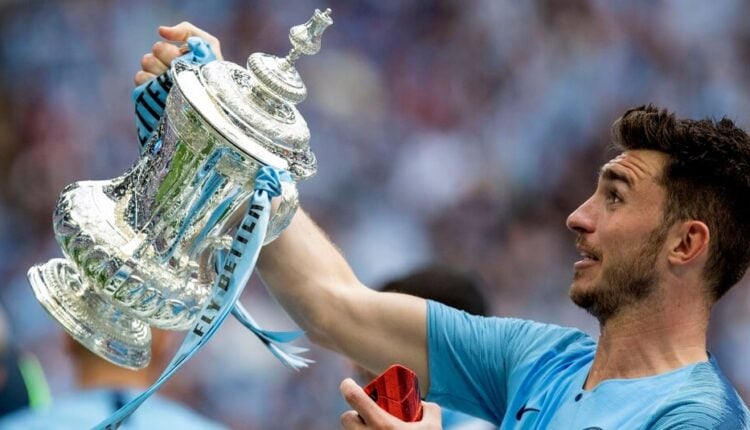 We’re reaching the business end of the Fantasy EPL season, and the fixture re-arrangements will start to impact the plans of all Fantrax Draft Managers!  Get ahead of the game, and starting planning for the Blank and Double Gameweek’s now!!  First up, we’ll talk you through how to Navigate Blank Gameweek 28!

Gameweek 28 will feature two postponed fixtures due to the League Cup Final on Sunday 1st March.  The final will be played between Manchester City and Aston Villa, and therefore these two teams will have a Blank Gameweek 28.  Their proposed EPL opposition for this weekend, Arsenal and Sheffield United, also face the prospect of a re-arranged fixture.

With only two fixtures being postponed, it’s highly likely that you’ll be able to field a strong side and have a good chance of picking up a victory.  However, if you own De Bruyne, Aguero, Mahrez, Grealish, and Laporte, then you won’t be able to drop any of these players, and will likely have to sacrifice this Gameweek.  What a team that would be if you did own those players, by the way!

It is also important to look at your current placement in the league table, and who where your Gameweek opponent currently is in the table.  You need to decide if it’s in your best interest to potentially drop a good player without a fixture, for a decent player with a fixture.

If you’re coming up against a fellow title rival, then you’re going to want to field a strong side.  Therefore, it would probably be worth dropping a good player, for a decent player.  On the flip side, if you’re playing a manager who is towards the bottom of the league, and has a poor squad, or isn’t really trying anymore, then you can probably get away with fielding a weakened team for Blank Gameweek 28.  This will enable you to keep hold of most of your players, and still be in with a shot of picking up three points!

In any case, you need to find a good balance between players who do or don’t have a match, and make a decision on which games or players you need to be targeting.  There’s no point destroying your team just for one Gameweek, especially this one where there are only two postponed games!  These two games will be re-arranged for a few Gameweek’s time, and therefore a Double Gameweek will be on the cards.

The following table outlines our thoughts on the noteworthy players from the four teams with a Blank Gameweek 28.  The ‘Droppable Rating’ is our recommendation regarding if we think you should drop each player from your roster:

N.B. We’ve not listed out all the Manchester City players – keep all of their big-name and high ownership players as they will have a Double Gameweek further down the line.

The following low ownership players are the best Fantasy EPL prospects to target as your replacement players.  The players have ownership of below 60% and have a good fixture during Blank Gameweek 28.  Some of these players also have good fixtures prior to this Gameweek, and would, therefore, serve you well before Gameweek 28 too!  The table below sets out the teams with the best upcoming schedules: 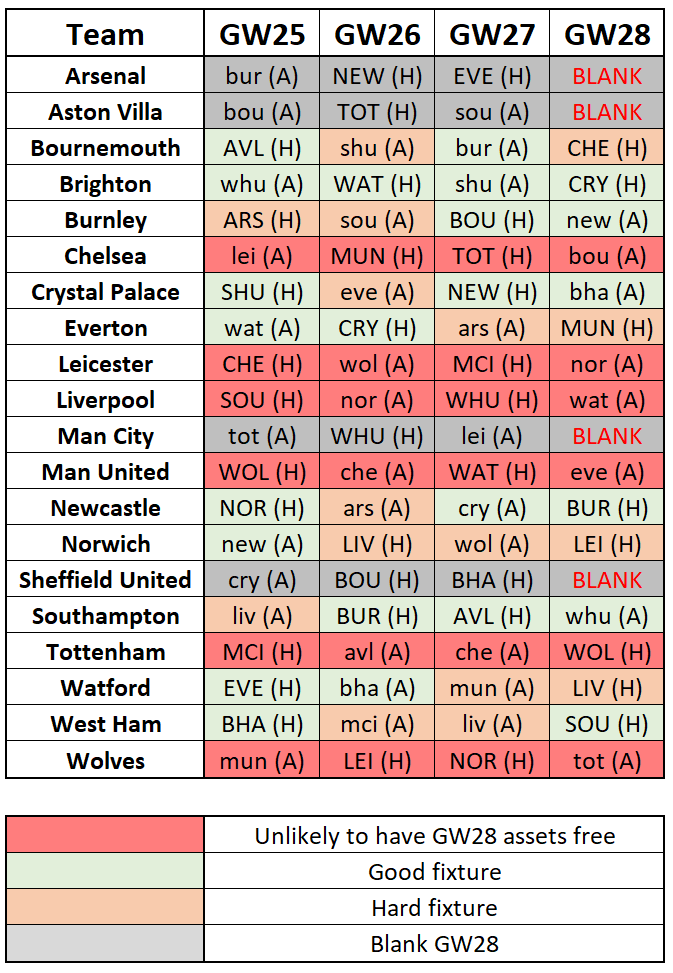 Brighton faces Crystal Palace in Gameweek 28, and therefore we would highly recommend signing their chief playmaker Aaron Mooy.  The Australian international is really hitting some form at the moment and is worth signing up now in preparation for Blank Gameweek 28.  We’ve featured Mooy a lot in recent weeks, and he’s a player that should perform well for the whole of the rest of the season.  Brighton face Sheffield United prior to Gameweek 28.  If you’re looking for defensive reinforcements, then Lewis Dunk (76% ownership) is the safest option from Brighton.

Burnley face a trip to Newcastle during Blank Gameweek 28, and their left-back Charlie Taylor should score well during this fixture.  The Englishman is not clean sheet dependent and would be a solid acquisition for managers prioritizing Gameweek 28.  Prior to this fixture The Clarets face Bournemouth.  An alternative here is forward Jay Rodriguez (10% ownership) who is finding some form with Ashley Barnes (and now potentially Wood) out injured.

Armstrong has established himself in the Southampton side over the last month or so, and looks a real prospect in Fantasy EPL ahead of the rest of the season.  Southampton is on good form, and have a very good upcoming schedule.  They face Aston Villa in Gameweek 27, followed by West Ham in Gameweek 28.  Shane Long (22% ownership) is a good alternative, as he’s also been scoring well in recent weeks.

We’re also recommending a Southampton defender for Blank Gameweek 28.  Due to the aforementioned red-hot form, getting on board the Southampton train will serve you well before, during, and after Gameweek 28.  Our defender of choice is Jack Stephens, who has been performing very well in recent months.  The big center back has been scoring well and popping up with the odd attacking return also.  Stephens is a good addition to any Fantasy EPL roster right now.  Ryan Bertrand (30% ownership) and Kyle Walker-Peters (30% ownership) are decent alternatives.

Norwich City faces a tough game in Blank Gameweek 28, and a tough couple of games beforehand.  However, their new signing Ondrej Duda looks like he’s a great Togga Scoring player, who could be fixture proof.  The Slovakian international started life at Norwich with three double digit scores in his first three of his Fantasy EPL games.  The fact that Duda has a fixture during Gameweek 28 is all the more reason to sign him.  If the Norwich City midfielder is still a free agent in your Draft League, you need to sign him!

One of the picks of the January Transfers, Nabil Bentaleb was brought in by Newcastle and scored a great 12.5 points on his debut.  If his debut is anything to go by, Bentaleb is going to be a great ghost point scorer.  He followed this up with a 5 point score against Arsenal in Gameweek 26, but they did lose this game 4-0!  We would highly recommend signing the Algerian midfielder, irrespective of his Blank Gameweek 28 prospects!!  Similarly, if Allan Saint-Maximin (62% ownership) is a free agent in your Draft League, he’s an essential signing!

There are other players to consider who either don’t have a great Gameweek 28 fixture, or have a tough fixture schedule in the run up to this fixture.  Starting with Crystal Palace, it might be worth taking a look at Cenk Tosun (11% ownership) or Christian Benteke (25% ownership) if you’re after a forward.  Whichever one of these two Chaps starts in Gameweek 28 is worth a look. Benteke scored in Gameweek 26, and has been scoring very well on Fantrax in recent weeks.

Everton doesn’t have the easiest of runs over this period, and their Blank Gameweek 28 fixture against Manchester United is hard to predict.  One player who you should target irrespective of the fixtures is Bernard (47% ownership).  The little Brazilian playmaker has been finding some form under Ancelotti, but he’s still not guaranteed to play every game.  Elsewhere, Mason Holgate (25% ownership) is still fairly under the radar and is a decent defender to target ahead of Gameweek 28.

N.B. Chelsea, Leicester, Liverpool, Manchester United, Tottenham, and Wolves are not featured due to their players being highly owned.  It’s unlikely you’ll find a viable Blank Gameweek 28 option from these teams.

So there you go, Chaps.  Some strategy tips to consider for Blank Gameweek 28, as well as key under the radar players to target.  If this fixture is one that you’re targeting to win, then bringing in a few of the Fantasy EPL players mentioned above will serve you well.

Blank Gameweek 31 is the next hurdle for Fantrax managers, as this clashes with the quarter-finals of the FA Cup.  We’ll be back with a bigger and better version of this article, Navigating Blank Gameweek 31, very soon!!