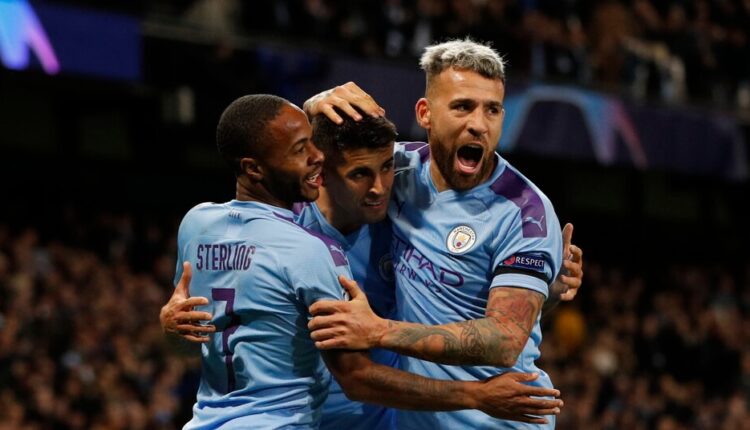 First of all, just a quick refresher to anyone who doesn’t know what PP90 is. PP90 refers to Points per 90. This tends to be a better metric for judging a player’s value than total fantasy points which can overvalue individuals who play 90 minutes week in, week out, or FP/G (fantasy points per game) which undervalues individuals who get subbed on or off regularly.

Boring maths aside, PP90 allows us to see which teams are good for our fantasy players to face, and which ones aren’t. This information can then help us decide who to start and who to bench; for instance, last week, sitting Timo Werner – a certifiable first-rounder – against Manchester City would have been the advised move because City has the lowest PP90 Against for Forwards in the league. It can also help us in waiver wire and free agent pickups; for example, in GW17, picking up Emile Smith Rowe may have been suggested, given that Arsenal’s opponents West Bromwich Albion have the highest PP90 Against for Midfielders in the league.

Heading into GW18, we now have a decent chunk of data to work with. As such, the following PP90 figures can be dissected in the hope of giving you an advantage in your league this weekend. 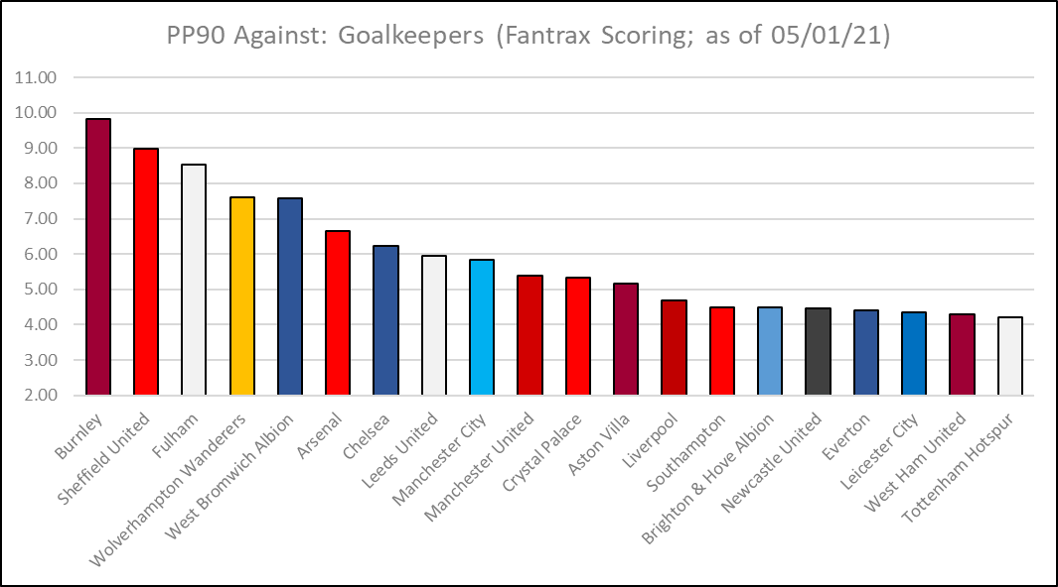 No surprises that Burnley and Sheffield United are the teams to target when streaming goalkeepers. The two clubs have the 4th and 2nd fewest shots per game, respectively, in the league and combine that depressing statistic with the two worst goals per shot ratio in the league too. Not a good recipe for finding the back of the net.

Fulham is a close 3rd (they are equally impotent, though they do try a bit more), whilst midlands duo Wolves and West Brom take 4th and 5th spots. After this, you have five teams for which the data is playing with intuitive fire: Arsenal, Chelsea, Leeds, Man City, and Man United are all ones that instinct would suggest to avoid, but for which the numbers don’t necessarily agree. It should be noted though, that the difference from Arsenal in 6th “worst”* PP90 Against to north-London rivals Tottenham with the best PP90 Against is just 2.43; that’s smaller than the difference between Arsenal and Burnley. It would take a brave manager to back a goalkeeper facing any of these, but if the first five aren’t available, then the numbers have your back.

In terms of teams to avoid…the list is long. Or rather, the list is currently ambiguous. What may help make decisions is knowing the standard deviations of goalkeeper scores. Higher standard deviations reflect more volatile performances, whilst lower standard deviations reflect more consistent performances. Whether you want volatile or consistent will depend on your individual matchup (and perhaps your personality too!). Of the lowest PP90 Against (from Liverpool to Tottenham), the order of most to least volatile is as follows: Tottenham, Everton, Liverpool, Leicester, Brighton, Southampton, West Ham, and Newcastle. So if you’re stuck for a goalkeeper, and don’t need to take a risk, back the goalkeeper facing Steve Bruce’s men. And if options really are limited, and you need a big score to give yourself even a sniff of a chance, despite the league-best PP90 Against, it may actually be advisable to go with the goalkeeper facing Spurs. 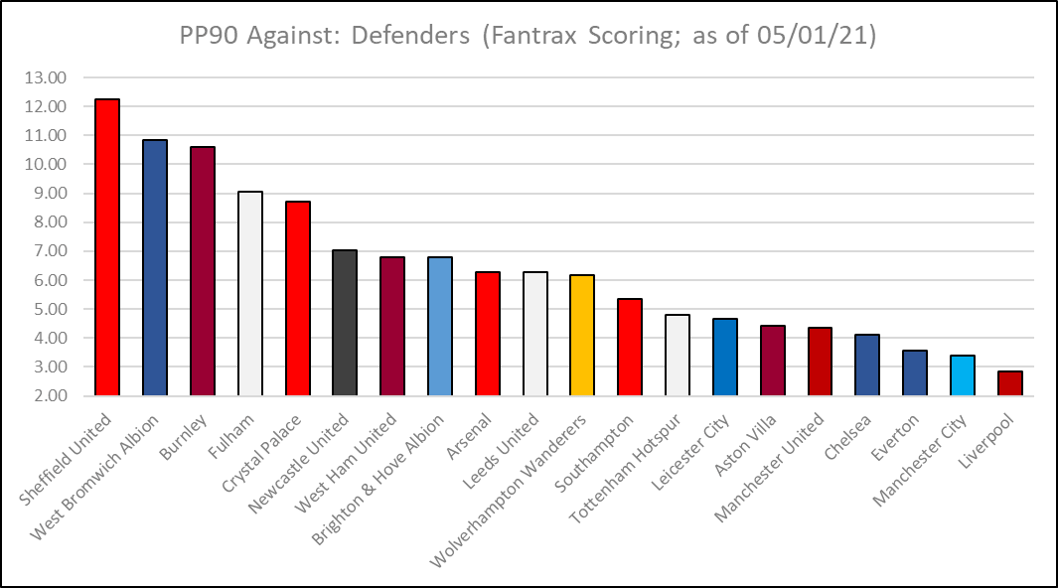 There’s much greater variation when it comes to PP90 Against for defenders – great news for those employing a streaming strategy. Unfortunately, the data here isn’t revealing anything that secret though. Even someone who has never watched football (maybe even Michael Owen and Garth Crooks too, though that’s not certain), could tell you that you want your defenders playing against the likes of Sheffield United, West Brom, and Burnley. These three relegation-threatened clubs sit 4th, 7th, and 2nd for number of high passes made this season, which given the value of aerial duals won in Fantrax scoring, may help explain their high PP90s here…that and the fact that they’re the three lowest scoring teams in the league of course.

The other end of the spectrum is basically all of the title challengers (except Everton obviously). In fact, the nine lowest PP90s are the top nine teams in the league currently…have we stumbled upon an odd predictive metric?! Anyway, avoid Liverpool like the plague (or COVID) and avoid Manchester City and Everton almost as much. 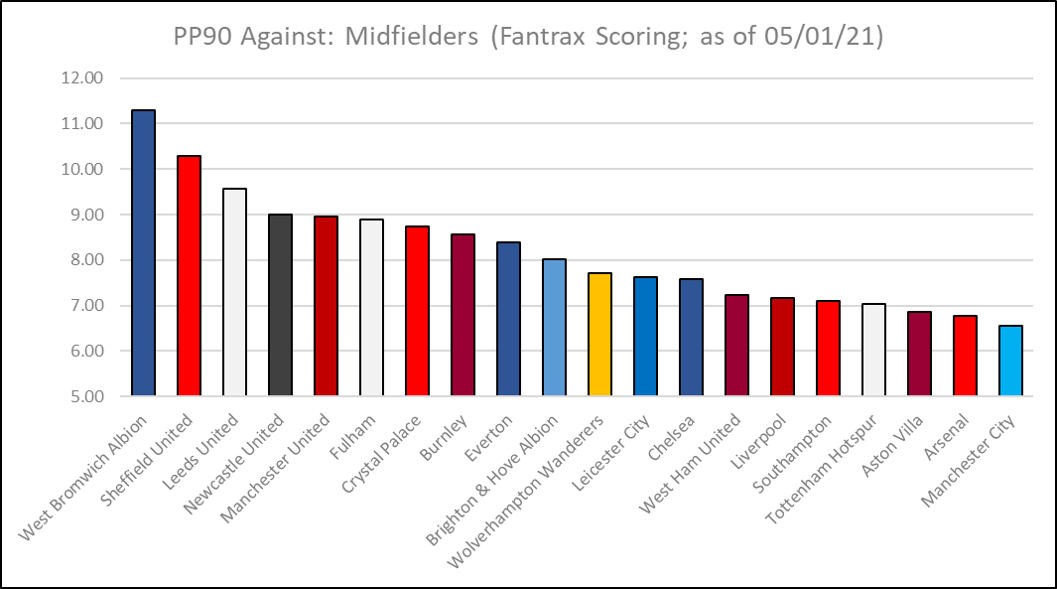 Big Sam’s new side have an unenviable and sizeable lead atop the PP90 Against table for midfielders. They are followed by Sheffield United and then, perhaps surprisingly, Leeds United. Marcelo Biela’s side, therefore, may provide the first instance of hidden gems from a streaming perspective. Leeds has a blank in GW18, but take on Brighton in GW19; Bissouma and – if he starts – Lallana are two with low ownerships that could be taken advantage of here.

Some very interesting teams situated at the opposing end, with West Ham, Aston Villa, and Arsenal part of a seven-team group with the lowest PP90s Against. Manchester City takes the top spot (this is a consistent theme: if your outfielder faces Peps men, sit them), but there’s just 0.4 between Arsenal in 2nd and West Ham in 7th. Like Leeds, West Ham doesn’t have a game in GW18 (though with all these blanks, you probably won’t have the option of sitting anyone anyway), but in GW19 they take on Burnley. McNeil owners might want to keep him on the bench if he does start – it’s not as tasty a fixture as it first seems. 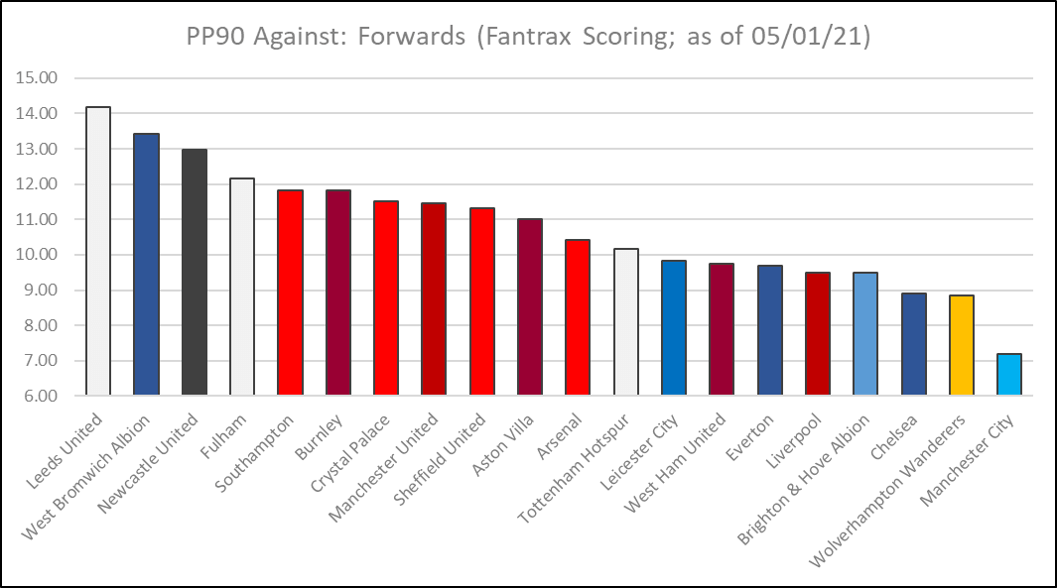 Facing Manchester City is bad for defenders. It’s bad for midfielders. It’s absolutely awful for forwards. Their PP90 Against is a massive 1.68 lower than next best’s Wolverhampton Wanderers. Sitting your forward against Peps’ side is a solid rule to follow, though be aware that even City’s PP90 Against here (7.18) is considerably higher than most PP90 Against’s for defenders (and some for midfielders). This means that if you have the option of fielding a forward against City or a defender against, say, Newcastle or West Ham, the numbers would still suggest going with the forward*. Manchester City’s league-best 13 goals conceded plays a large part in these miserly numbers, though the 34 shots on target against also has a big role – the next fewest is Brighton who has given up 15(!) more.

Leeds’ generosity to midfielders is nothing compared to their generosity to forwards. The media darlings (eurgh) have a PP90 Against of over 14, almost a point clear of West Brom in second. Given the injuries that Brighton (Leeds’ opponents in GW19) have up top, Maupay is a definite start for all owners, whilst it would be wise to check their lineup for the potential return of Welbeck or introduction of Jahanbakhsh. West Brom lies in 2nd spot and their next game is against their rivals Wolves – could it be a dream debut for any incoming Wolves forward? Finally, Newcastle sits 3rd, and whilst starting any Sheffield United player right now can seem far from appealing, backing McBurnie (if fit) or one of the other Blades forwards to do the business against the Magpies in GW18 would be a wise move.

*It’s important to remember that, as the data is dealing with PP90 and not total points, minutes need to be taken into consideration. As such, you need to be confident that your forward will play all/most of the match. Forwards are more likely to be subbed off than defenders, therefore a straight comparison of PP90 Against between positions is not entirely appropriate.