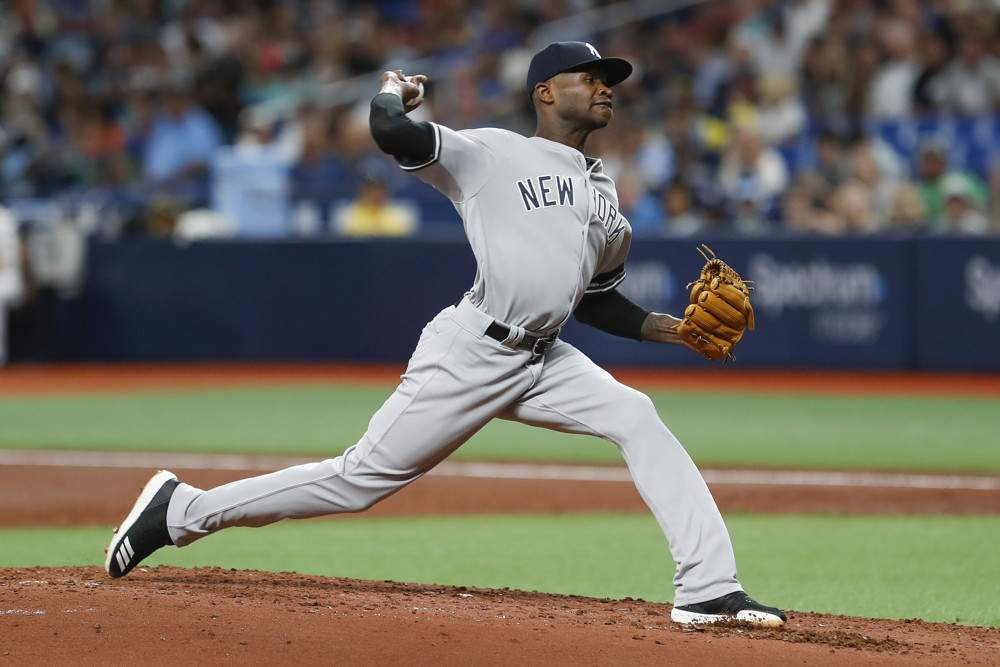 Given the oddness of the 2020 season, it’s easy to forget about players who were absent from all the madness–for whatever reason. Some players opted out, others were hurt, but Domingo Germán spent his 2020 suspended for violating MLB’s domestic violence policy. How one feels about Germán as a person is one thing, but Germán the starting pitcher has intriguing upside when on the mound.

With the Yankees having a clear need for starting pitching entering the 2021 season, Germán finds himself in an ideal situation for his immediate future as an MLB player. The time is now for Germán to perform and as fantasy managers, we can’t forget about him in our offseason drafts.

During the 2009-2010 international signing period, the Marlins signed Domingo Germán out of San Pedro de Macorís in the Dominican Republic. At just 17-years-old, his stuff was largely raw, as was his experience against more polished players. As a result, the Marlins elected to have Germán start his career off by pitching for the Dominican Summer League Marlins to improve his overall pitchability.

After another stellar season in 2014 pitching for the South Atlantic League’s Greensboro Grasshoppers where he earned a 3.26 FIP and sparkling 113:25 K:BB, he was the only Marlins player to be selected to the 2014 Future’s Game. Up to this point, Germán’s future looked nothing short of promising. The Yankees saw this potential and decided to trade for him in the December 2014 deal that sent Martín Prado and David Phelps to the Marlins for Nathan Eovaldi, Garrett Jones, and Domingo Germán.

Unfortunately, in Spring 2015, Germán was forced to undergo Tommy John surgery, holding him out for the entire 2015 season and the first few months of 2016. He made appearances for the Yankees’ Low-A, High-A, Double-A and Triple-A affiliates before making his long-awaited MLB debut on June 11th, 2017 against the Orioles. He pitched 2.2 innings of relief and allowed 2 hits, 1 walk, no earned runs and struck out one. His hard pitches topped out at 98.6 mph while also showcasing his changeup and curveball.

He didn’t start his first game as a Yankee until May 6th of the 2018 season against the Indians and he was simply magnificent. Germán did not allow a single hit while striking out nine and walking two over 6.0 innings pitched. He also earned a whopping 16.7% swinging strike rate and the baseball world was officially aware of how talented Germán is. Fast-forward to the end of the 2019 season and Germán had earned a 4.52 ERA (3.91 SIERA), 273:81 K:BB (18.6% K-BB) and 38.7% groundball rate over his first 243.0 MLB innings pitched. Now with plenty of mileage on his arm between the MLB and the minors, Germán was poised to continue improving his game before the domestic violence situation put a pause to his development. 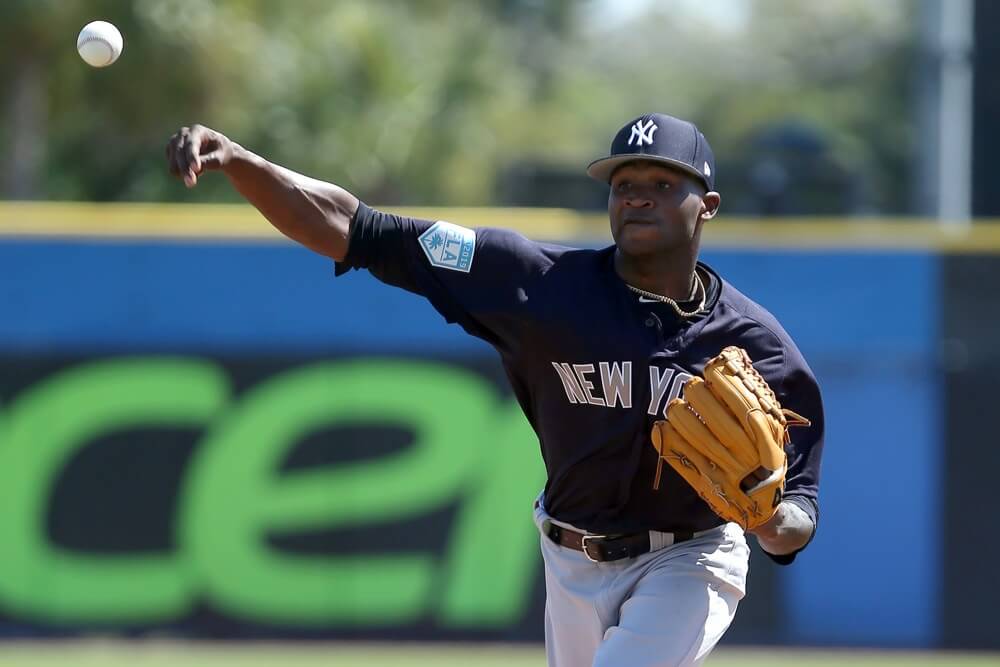 At 6-foot-2 181 lbs, Germán steps onto the mound with a lanky, slender but athletic physique. His delivery is compact, intentional, and repeatable. There aren’t many extra movements and he comes right at you with his offerings that all have solid arm-side movement. He’s always been the type of pitcher who throws a lot of strikes and tries to attack the zone. In addition, he throws from a distinct low three-quarters arm slot that at times looks like he’s side-arming pitches.

Beyond that, there are times where it appears his arm slot is slightly raised when throwing his changeup and curveball, while his hard pitches remain at that low three quarters arm slot. Using a very low arm slot for his hard pitches likely helps give his hard pitches that “rising” effect that can easily fool hitters when thrown up in the zone or when located properly. Furthermore, this potential difference in his arm slots could be how Germán gets some of his break on his secondary pitches, or it could just be habitual. Though, if a batter is able to pick up on this slight difference, it could give them an advantage. But for the most part, Germán’s arm slot appears to stay relatively consistent when on the mound.

Germán’s curveball is his most used pitch, and for good reason. It sits 79-82 mph and has moderate 12-6 movement to it. It’s slightly firmer than your typical 12-6 curveball and as a result, can sometimes look like a splitter that has above average depth. Even more, Germán commands it extremely well. With 1,412 thrown so far in his MLB career, the pitch has a 38.0% K-BB, 46.4% zone rate, 19.4% swinging-strike rate, and 57.4% contact rate. This indicates Germán is doing whatever he wants with his curveball and batters can’t touch it. It’s arguably his number one offering and it will be a huge part of his success going forward.

His four-seamer sits 91-95 mph and can max out in the upper 90s. With at least 2,440 RPM on the pitch in each season since his MLB debut, it’s always been a four-seamer with above average movement. Both its vertical drop and horizontal break are slightly above average, which can lead to a solid amount of swinging strikes for a hard pitch (8.7% career swinging strike rate). Due to this natural movement, Germán has had trouble commanding the pitch early-on in his career, but his K-BB% on the pitch has improved every year since his debut: -25.0% K-BB in 2017, 15.6% K-BB in 2018, 10.3% in 2019. As his four-seamer command has improved, his overall command and confidence on the mound has as well, a very good sign for his future as a starter.

His two-seamer/sinker sits 91-95 mph and is a pitch that he has gradually thrown less and less as he’s advanced through the higher levels of professional baseball. In 2019, it was his least used offering but when he did throw it, it was effective, particularly for inducing ground balls. To be specific, his two-seamer has earned a 55.8% groundball rate over the course of his MLB career. The pitch has slightly above average vertical drop and great horizontal break. It’s also notable that batters have made contact with his sinker 87.5% of the time he’s thrown it in his MLB career. So despite the good sinking movement, it’s a pitch that won’t miss many bats at all. Something that could give context to this high contact rate is the fact that he often times leaves his sinker much higher in the zone than it should be. 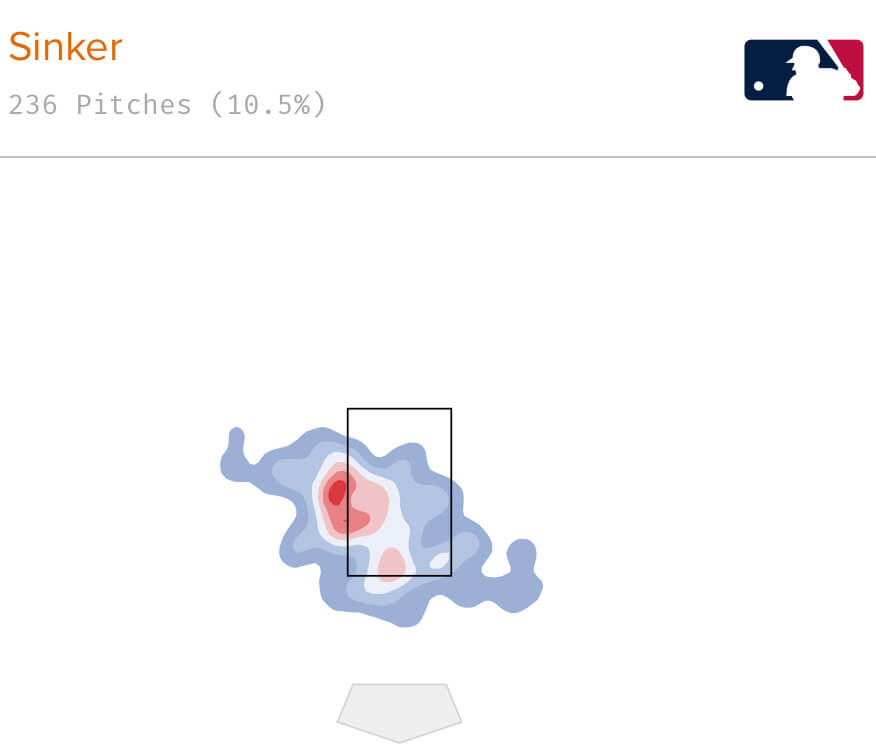 Why? Likely because the slightly above-average movement on the pitch can be hard to consistently command. When thrown to right-handed hitters, the pitch rides into them and all a hitter has to do is get their hands inside and make a compact swing. This leads to plenty of line drive hits and unwanted contact. It’s possible Germán knows it’s sometimes too hard to command the pitch and that’s why he’s throwing it less and less. Nonetheless, it’s a pitch that is most effective when thrown down in the zone, like most two-seamers/sinkers.

Arguably his nastiest pitch, his changeup can make any batter look silly. Sitting 85-88 mph, it’s a pitch that he can consistently throw lower in the zone with unhittable late movement when located perfectly. With 3.2 more inches of horizontal break than changeups similar to Germán’s, it’s clear why this pitch can effectively and consistently induce groundballs as well as swings and misses. In his MLB career, the pitch has earned a 45.0% groundball rate and 15.4% swinging-strike rate. Though the pitch in and of itself doesn’t earn a lot of strikeouts, it helps set up his curveball and four-seamer, his two best strikeout offerings.

As a whole, Germán possesses an arsenal that can surely be used successfully as an MLB starter. He can command each pitch well enough, though sometimes the movement on his hard pitches leaves them up in the zone and hitter’s make him pay. Interestingly, in 2019, not one of his pitches had a zone% less than 45.9%. He simply pounded the zone, emphasizing just how solid his control can be. More than that, he can attack the zone with all of his pitches, making it harder for batters to know exactly what’s coming next. Furthermore, his BB% has decreased every year since 2017 and sat at a career low mark of 6.6% in 2019. As Germán gains more experience, his natural ability to pound the strike zone is helping him learn how to command the pitches he throws better, while also understanding which pitches he should start throwing less. More than likely, we have not yet seen Germán’s ceiling.

As of today, Germán’s role as the Yankees’ third starting pitching option is virtually a lock, right behind Gerrit Cole and Jordan Montgomery. Though many likely dislike Germán as a person for his off the field actions, his talent on the field is undeniable. Unless the Yankees opt to simply not include him in the rotation or sign some free agent starting pitchers, Germán will be pitching for the Yankees as a starter this Spring. So, should you target Germán in your fantasy drafts? Definitely.

He currently has a 291.33 ADP on Fantrax, going right after Drew Smyly and right before Dylan Cease. At this price, it’s very possible Germán becomes one of the best draft-day values of the 2021 fantasy baseball season. It’s easy to forget that in 2019, he allowed 3 runs or less in 18 of his 24 starts. While he’s not immune to the occasional blowup outing, more often than not he’s proven he will deliver a quality start. In roto/category leagues, Germán could be a huge late-round boost to your team’s strikeouts, ERA, innings, and wins/quality starts. In points leagues, he’ll likely have even more value as a nice-backend starter for your teams. It’s been a long time since Germán has thrown a pitch in the MLB, but that should change starting this Spring. Don’t forget about Domingo Germán in your fantasy drafts this offseason, he could be the late-round sleeper you’ve been looking for.