Lance Lynn: Workhorse Starter, but is he a Fantasy Ace? 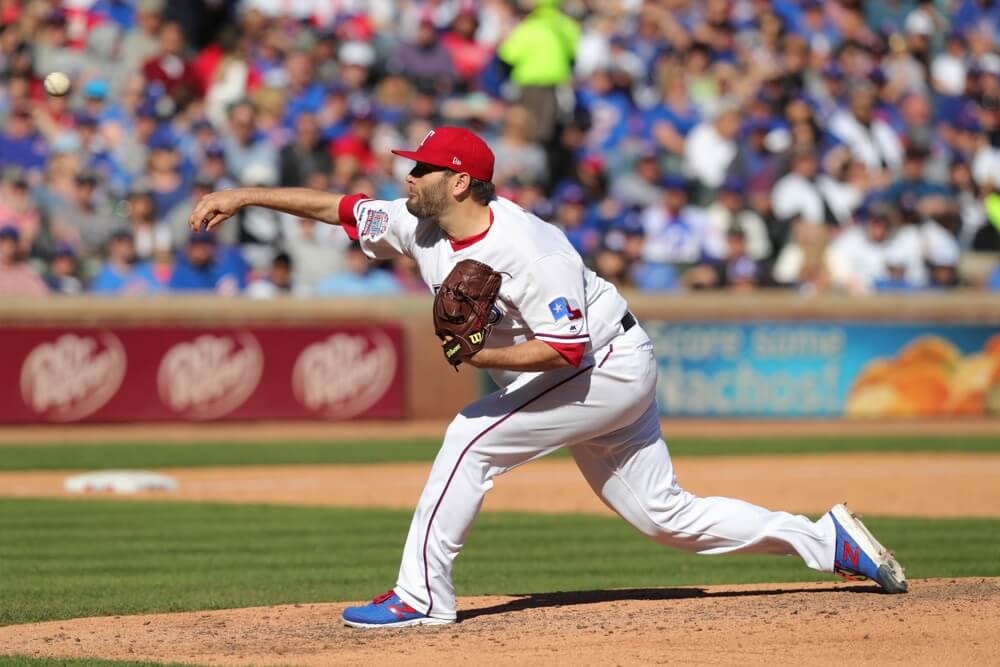 Early in December 2020, the Rangers traded Lance Lynn to the White Sox for pitcher Dane Dunning and a prospect. Lynn bolsters a White Sox rotation with a mix of veterans and young starters. His stock rises from a team context and run-support perspective. Two words that come to mind with Lance Lynn – workhorse starter. Over the past seven seasons, not including 2020 and 2016, where he missed the entire season, Lynn averaged over 31 games started plus over 186 innings pitched. Outside of 2018, when he pitched for the Twins and Yankees, Lance Lynn never logged an ERA higher than 3.97. We haven’t included Lynn’s 2020 season yet, which we’ll dive into later.

As always, we’ll dig into the surface stats and advanced metrics for Lance Lynn. Can he sustain his success in 2021? What do we make of his fastball-heavy approach? We plan to answer all those questions and more as we dig into the profile of Lance Lynn.

Over Lance Lynn’s career, he gradually lowered his ground ball rate and increased his fly-ball rate. His ground ball rate typically hovered at 40.3% or above, with a career rate of 43.9%. On the flip side, he holds a career 34.7% fly-ball rate compared to 42.3% in 2020. Given his career trends, it’s likely that Lynn’s batted ball profile evens out over a full season. Later on, we’ll touch on the quality of contact via his Statcast data. The increasing fly ball rate is something to monitor moving forward.

With the mediocre swinging-strike rate, it’s no surprise that most of Lance Lynn’s pitches don’t finish with high swinging-strike rates. Lynn typically uses a fastball-heavy approach with his four-seamers, cutter, and sinker dominating the usage. However, we’ll analyze that a little later. Outside of his zone rate, Lynn doesn’t meet any of the criteria for a Money Pitch. According to the Pitcher List glossary, Money Pitches include pitches with a 40% O-Swing%, 40% Zone Rate, and 15% swinging-strike rate.

Lance Lynn ranked above average in several Statcast metrics, including expected stats, strikeout, and walk rates. He ranked slightly below league average in the quality of contact allowed in 2020. However, he ranked in the 70th-percentile or above in the hard-hit rate, exit velocity, and barrel rate in 2019. Over the past couple of seasons, Lynn boasts similar expected stats allowed. Interestingly, Lynn had expected stats slightly lower than his career levels, which tells us that these likely even out over a full season. The table below shows Lynn’s expected stats over the past two seasons with the Statcast history (2015-2020) and league averages for comparison. As we can see, Lynn typically performs better than the league average across the board.

Sometimes, we want pitchers to decrease their fastball usage with an increase to their offspeed or breaking pitches. However, with Lance Lynn, he bucks the trend. In 2020, Lynn used his four-seamer 50.2%, cutter 22.2%, and sinker 18.1% of the time. That’s over 90% of his pitches on different types of fastballs. He minimally uses a curveball at 8.4% and changeup 1.1% of the time, which is slightly less than the usage in 2019. We have a similar trend over the previous three seasons (2017-2019), where Lynn used those three fastballs for 87.5%, 89%, and 90.1% of the time in each of those seasons. That’s unheard of for a starter to have an arsenal of ten percent or lower on offspeed or breaking pitches while having success in doing so.

With that said, let’s dig into Lynn’s trio of fastballs. Since we already looked at his plate discipline by pitch, we’ll look at other notable pitch stats. The following data comes from Alex Chamberlain’s Pitch Leaderboard. In 2020, Lynn threw the most four-seamers with a K-BB% of 20.8%. Amongst starters with over 400 four-seamers thrown, Lynn ranked 6th with his K-BB% and 5th with a .381 xwOBA allowed. In 2019 and 2020, amongst starters with 1,000 four-seamers thrown, Lance Lynn ranked 2nd with a 59.9% zone%, 5th with a 15.4% swinging-strike rate, and 6th with a 33.3% called strike plus whiff rate (CSW%). Lynn pounds the zone with his four-seamer and performs well.

With his cutter (minimum 150 cutters), Lynn ranked 13th with a 27.2% called strike plus whiff rate (CSW%). Although Lynn uses his sinker the third most, it still performed decently in 2020 in terms of expected stats. When comparing 2019, hitters crushed Lynn’s sinker, so his 2020 sinker stats likely would even out over a full season. Even when we dive into his xBA, xSLG, and xwOBA by pitch, he dominated in 2020, but he struggled with his sinker in 2019. As mentioned earlier, Lynn surprisingly uses a fastball-heavy approach that works for him even if it’s unconventional.

As we dig into Lynn’s cutter, we have similar results over the past two seasons, with a 50.1% zone% (No. 10), 12.2% swinging-strike rate (No. 8), and 25.8% CSW% (No. 12). We’ll note that the cutter rankings came with a minimum of just under 500 cutters thrown. Lynn effectively used both his four-seamer and cut fastball. Even though the data looks different on Fangraphs and Chamberlain’s Pitch Leaderboard, we come to similar conclusions. How does the saying go – if it’s not broken, don’t fix it. Lynn isn’t a thrower, but a crafty pitcher.

In 2020, Lance Lynn had a 113 NFBC ADP and a 107 Fantrax ADP. However, Lynn finished as the 58th overall player and 11th starting pitcher, according to the Razzball Player Rater. With the early 2021 drafts, Lynn currently holds a 59.74 ADP on NFBC and a 44.7 ADP on Fantrax. That puts Lynn as the 21st pitcher off the board in NFBC drafts and only one reliever in Josh Hader that goes inside the top-20 pitchers. Meanwhile, Lynn ranks as the 14th starting pitcher drafted between Brandon Woodruff and Zac Gallen on Fantrax. Overall, Lynn’s ADP jumped in the early 2021 drafts compared to 2020. However, it appears for good reasons.

Reasons for optimism include Lance Lynn’s workhorse track record and a consistent ERA below 4.00 except for one season. Even his ERA estimators fall in line with his actual ERA. Over the past two seasons, amongst qualified starters, Lynn ranks 13th with a 20.6% K-BB% above guys like Zack Greinke, Luis Castillo, and Aaron Nola. Heading to the AL Central, Lynn will have opportunities to face a couple of weaker offenses. As a veteran and consistent pitcher, he pounds the zone with all of his fastballs and typically performs well. Lynn’s a workhorse that pitches a ton of innings with consistency and reliability.

Other "one bad start" SP, and what their ERA would be if we give 'em a mulligan. #BloomBoards 📊 pic.twitter.com/bPlJLJZ1at

One concern involves moving from the Rangers to White Sox, as it appears as a slight home ballpark downgrade, especially in home runs. Another reason for concern is Lynn’s increased fly ball rate over the past two seasons that typically hovered around his career average of 34.7%. Even his 13.8% HR/FB rate in 2020 raised eyebrows compared to his 9.8% career HR/FB rate that possibly evens out over a full season. A third concern involves a slightly high 79.4% LOB% in 2020 compared to his career LOB% of 75.5%. An additional red flag is Lynn’s low .242 BABIP in 2020 compared to a career .302 BABIP. Although it feels nitpicky here, we need to consider the whole picture as much as possible.

Lance Lynn feels like a safe and boring pitcher but provides innings with consistent and healthy ratios. Although he’s creeping up into his mid-30s, Lynn has shown few signs of decline. His Steamer Projections have him projected for 191 innings pitched, 9.65 K/9 (25.1% K%), 3.09 BB/9 (8% BB%), 1.44 HR/9, and a 4.28 ERA. Outside of his HR/9, it looks like Steamer expects Lynn to regress in the BABIP and LOB% department, which makes sense seeing the ERA projected above 4.00. Overall, I’m digging Lance Lynn as the 20th pitcher off the board heading into 2021. According to the FantraxHQ Staff Consensus Starting Pitcher Rankings, Lynn ranks as the 18th best starting pitcher between Sonny Gray and Max Fried. I’d love to pair Lynn with Jack Flaherty, Zac Gallen, or Clayton Kershaw, who all go about 20 picks earlier in ADP.