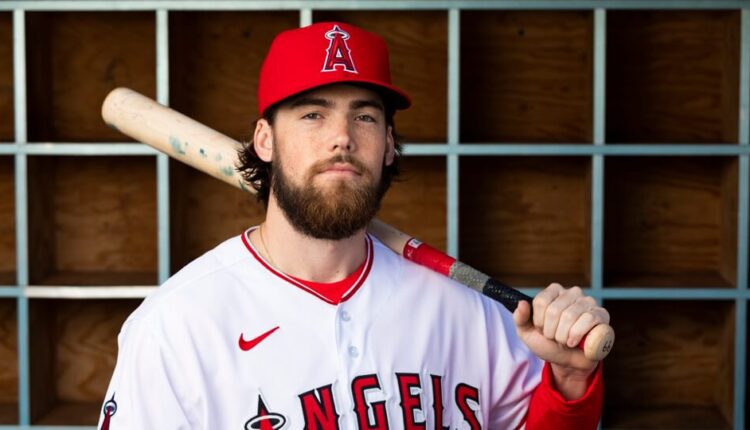 With Jo Adell debuting and exhausting prospect eligibility during the 2020 season, all eyes are now on Brandon Marsh. Often overshadowed by Adell, Marsh has performed well at nearly every Minor League stop. Marsh brings an intriguing skill set that can lead him to be a legitimate five-tool player. The star athlete was a two-sport standout in high school as both a wide receiver and an outfielder. That goes to show you how great of an athlete he was that he was a standout on the football field, but also good enough to be drafted in the second round of the MLB draft out of high school.

Marsh is on his way to making his Major League debut in 2021. What skills does he bring to the table? Is he valuable in 2021 redraft leagues? What can we expect long term for dynasty leagues? Let’s dive into Brandon Marsh’s profile and answer these questions.

After being drafted in 2016, Marsh did not debut until 2017 after dealing with a back injury. In his short-season debut in 2017, he looked like the star the Angels hoped he would be when they drafted him. He slashed .350/.396/.548 with four home runs and ten stolen bases in just 192 plate appearances. His first full season of professional baseball in 2018 was solid but still left plenty to be desired. But in 2019, Marsh began to put it all together as he slashed .287/.368/.408 with seven home runs and 19 stolen bases in 101 games. Marsh was even quite impressive in the Arizona Fall League, hitting two home runs and swiping four bases. His slash line of .328/.387/.522 was also very impressive. Outside of Marsh’s actual performance, what does he bring to the table? Let’s look into the profile.

Marsh has an open stance from the left side of the plate. His knees are slightly bent pre-pitch. Marsh brings his front foot back in to make his body square and toe taps about shoulder-width apart. Then, he really explodes, as his front foot plants well in front of his body. This gives Marsh plenty of room to whip his body and hands through the zone.

Marsh moves his hands quite a bit pre-pitch, but he gets his hands back and right in line with his shoulders as he loads. His swing has a great plane to it, and he can really use his body to help elevate the ball when he wants. Marsh’s hips lead the way, but his body and hands stay pretty much in sync throughout the swing. He has a high one-handed finish, and overall the swing is very athletic.

Marsh has always shown a good feel to hit and has a great eye at the plate. He really began to work on his approach and set-up at the plate before the 2019 season, and the results showed. The Angels really wanted Marsh to focus on standing more upright, which helped his overall balance and swing plane. When you watch his swing, it’s hard not to see shades of Bryce Harper and Charlie Blackmon there. Check out this comparison video below.

Seeing the ball well and drawing walks has always been a big part of Marsh’s game. In his Minor League career, he has posted a walk rate near 11 percent, which is impressive given how young he has been at each stop. Not only has the walk rate been good, but Marsh has also lowered his strikeout rate consistently with each year of development. Making more contact will lead to Marsh being able to hit for a high average consistently and tap into his power more.

It would be no surprise to see Marsh grow into a plus hitter that reached a .280 batting average some seasons. I could see him settling in around .270-.275, which is solid when you factor in everything else Marsh brings to the table. With the walk rates that Marsh posts, do not be surprised to see him post on-base percentages between .350-.370 regularly.

Brandon Marsh has yet to really show his true power in games yet. But as he became more comfortable with his adjustments in 2019, the power came more consistently toward the end of the season. Five of his seven home runs in 2019 came over his final 25 games. He also showed more power in the Arizona Fall League as he hit two home runs in 75 plate appearances. With his frame at 6’3, 215 pounds, there is not much projection, but he could add muscle and really add to his power.

Marsh will never be a huge power threat, but there is 18-20 home run pop in the bat. In peak seasons, I believe he could reach 23. There is room for growth, but given the other tools that Marsh possesses, he does not need to be a 30 home run bat to be a great fantasy asset.

Looking at his spray chart from 2019, you can see that Marsh hit a ton of deep balls in the outfield that did not end up home runs. According to Prospects Live’s Minor Graphs, Marsh had an average fly ball distance of 295 feet. That is not overly impressive,  but still solid. Marsh also showed that he can hit for power to all parts of the field. Expect Marsh to continue to grow into more home run power. 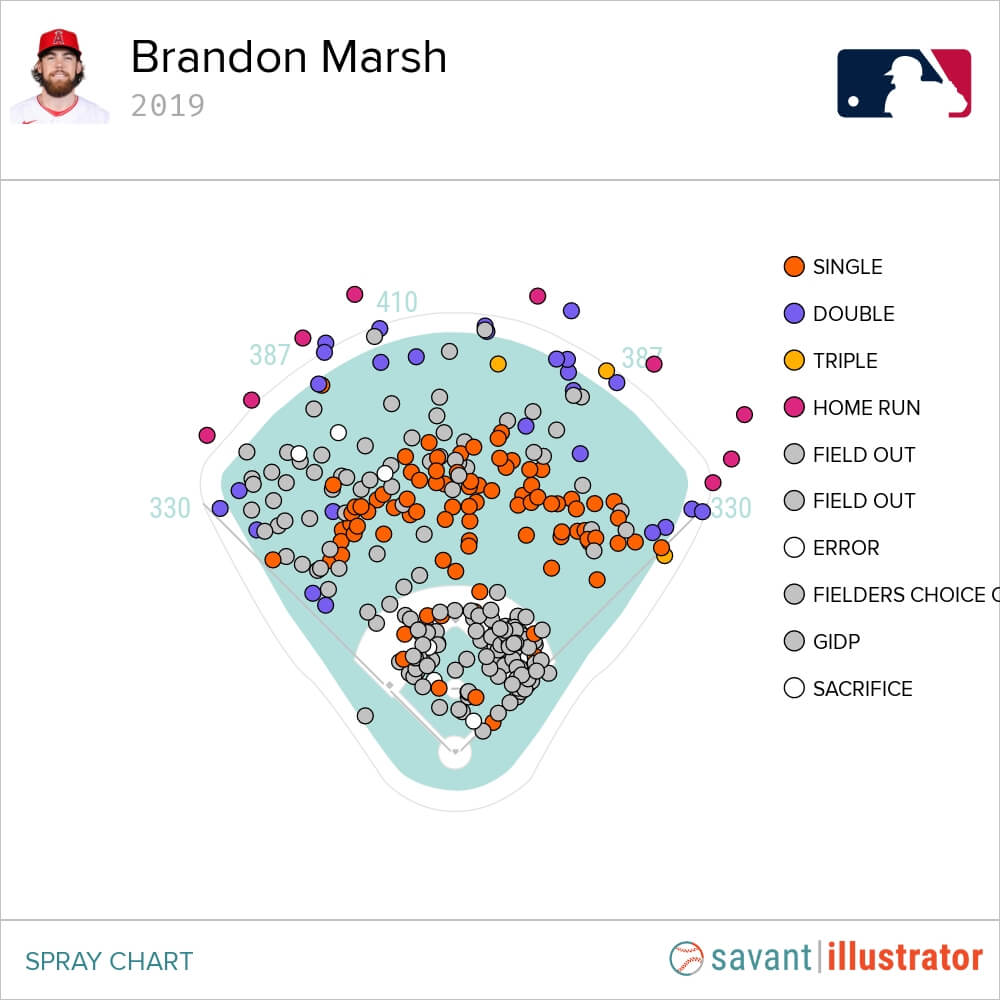 Marsh has easy plus speed and runs extremely well for his size. He has the frame of a wide receiver and runs like one too. While his run times are great, Marsh is also efficient on the base paths. For his Minor League career, he has a success rate of nearly 80 percent. The speed may decline if Marsh continues to add muscle mass. But with the kind of athlete that Marsh is, he will still be an above-average runner for most of his career. He is more than capable of stealing 2o bags regularly. He stole 19 in just 101 games in 2019, so he has shown to be more than capable.

Brandon Marsh uses his speed to his advantage in the outfield. He has proven that he can stick in centerfield long term because of his speed and glove. But, as you know, a guy by the name of Mike Trout will be patrolling center field for the Angels for many years to come. Regardless, Marsh will have no problem sliding over to either corner outfield spot and being a solid fielder.

Marsh also comes with a great arm. He can easily throw runners out at the plate, as you can see below. So base runners beware, do not try to run on Brandon Marsh; he will throw you out.

We have #Angels No. 5 prospect Brandon Marsh's arm as a 60. What say you?
Grades, scouting report, video and more on the @Angels' Top 30 list: https://t.co/ysW3AyIqrd pic.twitter.com/gvMLN42EaT

Brandon Marsh should debut in 2021, so there is some value to be had in redraft leagues. Joe Maddon has already stated that Jo Adell needs to spend some time in triple-A, and you can assume the same about Marsh. Marsh could be up by mid-season and get a chance to play every day in one of the corner outfield spots. He is going near pick 600 in NFBC drafts, showing you how people are valuing him for 2021. He is not someone I would go out of my way to draft unless you are in a deep draft and hold league. But Marsh is the kind of player that could be worth spending some FAAB on when he does get the call.

Long term, Marsh will be a great dynasty asset. His production at the plate could mimic some of Tommy Pham’s prime years. Pham hit 21-23 home runs and stole anywhere from 15-25 bases those seasons. Pham hit .273 in 2019 and .275 in 2018. This feels like what a Brandon Marsh season will look like statistically.

In a peak season, Marsh could hit near .280 with 20-23 home runs and 20-25 stolen bases. I would not expect that every season, but it is a high-end outcome. A major obstacle for reaching a peak outcome will likely be his ground ball rate. If Marsh can lift the ball more consistently, he can be a solid Fantasy asset.