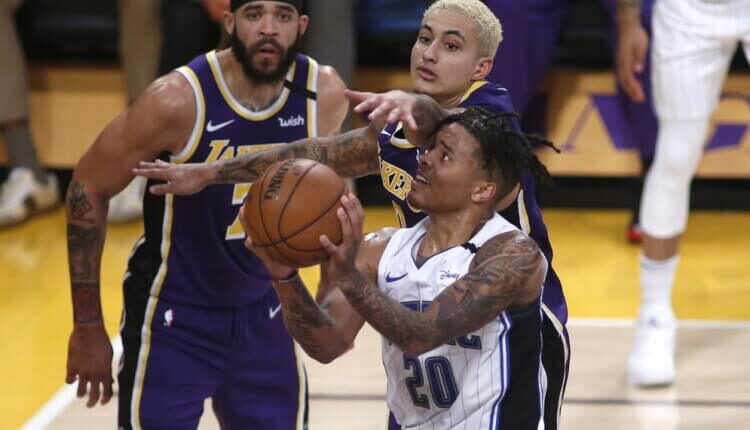 Unfortunately for NBA fans, there was only one decent game to watch Thursday night, mainly due to the fact there was only ONE game in total. That means for the weekend a whopping 22 teams have 2 games between Friday and Sunday.

With that many teams in action, streaming options are a-plenty. But with the convenience 0f choice comes the opportunity for a let-down. It may be harder to hone down just exactly who is the right fit for your squad. The first step is identifying which stat categories are worth chasing and go from there.

NBA Fantasy Streamers is a weekly article put out by Fantrax to help Fantasy NBA managers chase down statistics in weekly league formats. All the players listed below play 2 games in three nights between Friday and Sunday, giving you the best opportunity to maximize their statistical output.

The heat is a team still a team reeling from injuries across their roster. Fortunately, Strus is set to return from a shoulder injury Friday against the Celtics. The only reason Strus’s roster percentage is under 80% is due to his lack of action over the last couple of weeks. The undrafted wing is averaging 15.7 points and 3.2 three-pointers made on the season and should play a huge offensive role upon his return.

With Brandon Ingram and Herbert Jones sidelined, Trey Murphy is the next man up. In his last 3 contests, Murphy has dropped 22 points, 3 three-pointers made, and 1.3 steals per night. Both Ingram and Jones should be out at least until Sunday night, so Murphy will likely play 30+ minutes Friday, and there is a good chance he’ll see solid court time on Sunday as well.

Winslow has been the ultimate plug-and-play guy for the Blazers this year. With Grant or Hart out he plays forward, with Lillard sidelined, he even started at point (I’ll put in a word about guard eligibility). The Blazers as a team have faltered lately, but not due to the play of Justise.

During his current 5 game run of heavy minutes due to Blazer injuries, Winslow is averaging 11.4 points, 8 rebounds, and 4.4 assists. None of those statistics are eye-popping but in a close match-up weighed against a rostered player with only one game in three days,  double it. You’d be hard-pressed to find an end-of-roster player averaging 22, 16, and 9.

The up-start Kings have been lighting the beam more often than experts expected this year, and a big part of their success is due to Malik Monk. Monk has been extremely efficient, nearly pouring in 15 points a night in just over 20 minutes a game. Over his last 8 games, his minutes have been trending up and he has been delivering.

18.6 points, 4.5 assists, and 1.8 threes per game over the aforementioned last 8 games makes him one of the most productive per 36 scorers, and underrated distributors off the bench this year.

After missing the entire start of the season, Markelle Fultz made his return to the Magic lineup this week. Fultz is on a minutes restriction but is also starting. He is likely never going to become the dynamic scorer and playmaker many draft experts expected, but he is defensively solid and a good distributor.

This is certainly considered a risky pick-up, but guard play in Orlando has been anemic to start the season, and with no expectations for wins and losses Fultz could be a streaming pick-up that turns into a gem.

Fantrax was one of the fastest-growing fantasy sites over the last few years, and we’re not stopping now. We are the most customizable, easy-to-use, and feature-rich platform in the industry, offering the greatest fantasy experience for your dynasty, keeper, redraft, and best ball leagues. Fantasy sports doesn’t sleep, and neither does Fantrax, with seasons running 365 days a year. Take your fantasy leagues to the next level now at Fantrax.com!
Fantasy Basketball Streamers
Share