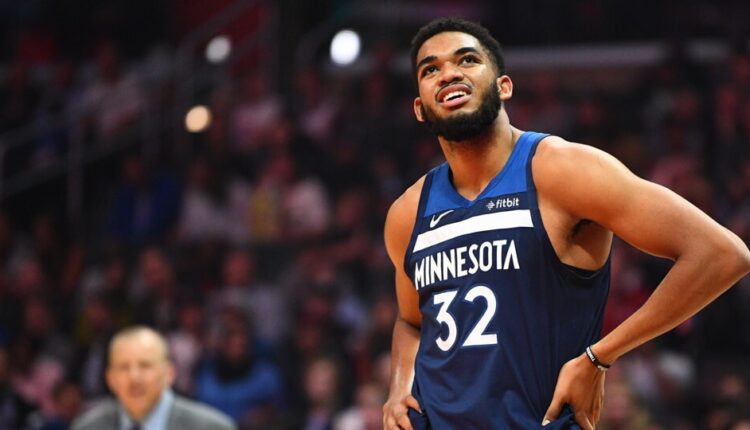 Welcome to another round-up of the most impactful fantasy basketball injury news from the previous week. The news is paired with actionable fantasy advice that will help get you one over your league mates. This week’s edition includes a couple of players returning from injury as well as updates on NBA stars Karl-Anthony Towns, James Harden, and Gordon Hayward among others.

Khris Middleton is expected to make his season debut against the Lakers after missing the first 20 games of the season. The three-time all-star will add a much-needed spark to the struggling Bucks offense. Outside of the initial easing-in period, you can expect a top-40 fantasy performance going forward. Middleton’s return means a hit to the stat lines of Grayson Allen and Jevon Carter, who have been borderline top-100 players so far. Though, it is not obvious which of the two will lose his starting spot and take a bigger hit.

Recommendation: Depending on the league depth, Allen and Carter could be dropped after a game or two.

Karl-Anthony Towns is expected to miss four-to-six weeks with a right calf strain. With the twin-towers experiment not really working in Minnesota, KAT’s injury opens up some possibilities for the Timberwolves. In theory, Rudy Gobert should get more play although that didn’t pan out in the first game sans Towns where Gobert scored 9 points and only grabbed a single rebound. Kyle Anderson is the expected main beneficiary of the available playing time with Jaylen Nowell being an interesting option off the bench. Naz Reid is the next big man off the bench, though, unlikely to have an impact significant enough for most fantasy leagues.

Recommendation: Get Kyle Anderson. Jaylen Nowell could be also worth a look.

Harden looks to be returning on Monday against the Rockets after missing 14 games with a right foot tendon sprain. It’s unclear what shape he’ll return in but he will likely take his usual high-usage role in the team’s offense. De’Anthony Melton and Shake Milton had been holding down the backcourt with Harden and Tyrese Maxey gone. With Harden returning and Maxey a week or two away from his return, Melton and Milton will take a huge tumble down the rankings. There might be a possibility to swindle a deal if either of them has a good game before Maxey’s return. By the virtue of his off-ball skills, Melton should have more long-term value than Milton.

Collins fell and sprained his left ankle on Wednesday against Orlando and is expected to miss at least two weeks of action. Jarrett Culver started in his stead in what was his first extended run of the season and contributed a very nice all-around stat line. Jalen Johnson, who is currently out with a sore ankle, is expected to get the bulk of Collins’ minutes when back. Neither Johnson nor Culver are owned in many leagues so this could be an opportunity for a two-week streaming session.

Recommendation: Johnson should be preferred to Culver if healthy.

Gordon Hayward is out indefinitely with a fractured shoulder. Also, LaMelo Ball is out indefinitely with a sprained ankle. As is Dennis Smith Jr. That means there should be tons of available minutes for the guard and wing positions. Theo Maledon is playing 30+ minutes, Bryce McGowens was called up from the G-League, and Terry Rozier is ready to shoot to the team to the #1 draft pick. As far as Hayward goes – it wouldn’t be the worst thing in the world to drop him if roster space is needed. He was outside the top 200 on a per-game basis in 9-cat leagues having played in only half the games.

Fantrax was one of the fastest-growing fantasy sites over the last few years, and we’re not stopping now. We are the most customizable, easy-to-use, and feature-rich platform in the industry, offering the greatest fantasy experience for your dynasty, keeper, redraft, and best ball leagues. Fantasy sports doesn’t sleep, and neither does Fantrax, with seasons running 365 days a year. Take your fantasy leagues to the next level now at Fantrax.com!
NBA Injury Update
Share