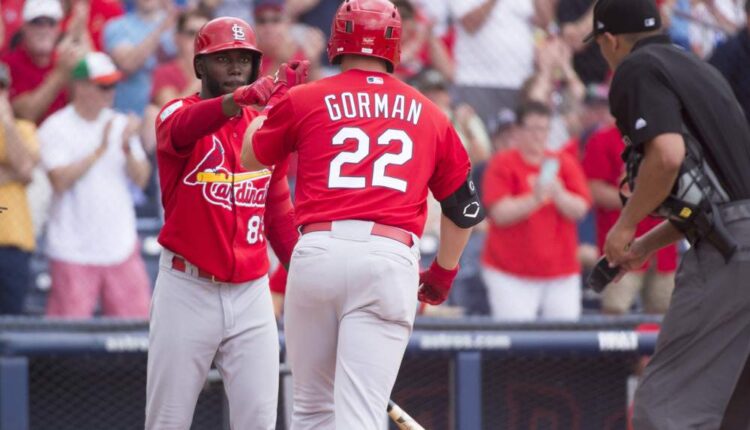 Another week, another Fantasy Baseball Waiver Wire report here on FantraxHQ. Regardless of what style league you play in and what point of the season it is, we should always be looking to improve our fantasy teams. Whether you’re looking to catch the next red hot breakout, find an injury replacement, or improve in a specific statistical category, the waiver wire can help you accomplish all of those. This week, we have plenty of power offensively, two high-upside catchers, and a pair of underrated pitchers.

With Tyler O’Neill heading to the IL, the Cardinals needed to fill his spot in the lineup. And what better way than with their #2 overall prospect who has already cranked 15 home runs in Triple-A this season. Nolan Gorman has been absolutely mashing this season, finally breaking out in the power department with those 15 dingers, a .677 SLG, and a .369 ISO in 147 plate appearances. All those numbers can be classified as sexy, but two metrics that are far from sexy are Gorman’s 34% strikeout rate and 62.4% contact rate.

The power he’s been showing this season is phenomenal, but throughout Gorman’s MiLB career, he’s projected as more of a .250-.260 hitter with 25+ home runs, not someone that’s going to hit for a high average. He’s worth a shot in 12+ team leagues for the upside, but don’t be surprised if the average is a tad low.

Since his MLB debut on May 3rd, MJ Melendez has only accumulated 38 plate appearances, but that stands to increase with Salvador Perez now on the IL. Melendez has taken full advantage with a pair of home runs over the last three days and five hits in his four starts over that span. As with Gorman, the big-time power is Melendez’s calling card and he put that on full display last season in Double-A and Triple-A with 41 homers in 124 games.

As usual, the catcher position is underwhelming this season, so chances are, many of you reading this right now aren’t overly happy with your catcher situation. If you roster one of the top catchers, you obviously hold them, but if you’re running out someone like Travis d’Arnaud or Christian Vazquez, making the swap to Melendez is a viable play to see if Melendez what Melendez can do in a full-time role. If he falters, you cut bait for the next hot name. No harm, no foul.

Two catchers in one week? Well, it’s really one catcher and one uber-catching prospect with the best set of all-around skills we’ve seen in quite some time. Rutschman projects at Mauer/Posey levels or maybe even higher longterm, which are lofty expectations but appropriate given his profile. He’s been tearing the cover off the ball since returning from a triceps strain injury, slashing .309/.427/.515 with a trio of home runs and more walks than strikeouts in 82 plate appearances. Your time to stash Rutschman is running out as he should be up within the next couple of weeks. If you have the bench depth, go snag him now.

Well, the big signings haven’t worked out for Texas so far, but Kole Calhoun has quietly been a bright spot for this team of late. Over the last two weeks, Calhoun is slashing .385/.457/.872 with five homers, 12 RBI, and eight runs scored including hits in eight of his last nine games and four home runs in his last five games. In general, Calhoun’s quality of contact metrics have been impressive this season. Calhoun currently sports a 14.5% barrel rate, 91.2 mph AVG EV, and 47.4% hard-hit rate with a .487 ISO over the last two weeks. We’ve seen solid power from Calhoun in the past, hitting 33 homers in 2019 and 16 more in just 54 games during the shortened 2020 season. In fact, those 49 combined homers were tied for the 13th most in baseball for those two seasons.

As a Red Sox fan, I’m always going to be rooting for anyone with the last name Yastrzemski. The grandson of the 1967 AL Triple Crown winner has actually put together a solid season so far, but remains available in more than 2/3 of fantasy leagues. A slow start is the driving force behind that, but over the last 28 days, Yastrzemski has slashed .333/.415/.537. His counting stats have begun to pick up over the las two weeks as well with two homers, nine RBI, and 10 runs scored.

For the season, Yastrzemski has improved his walk and strikeout rates to 11% and 16.5% respectively while maintaining his usual solid quality of contact metrics and even pushing his AVG EV to a career-best 92.9 mph. While Yastrzemski won’t help out in the speed department, he’s capable of providing steady production in the other four categories as a possible top-40 outfielder the rest of the season.

This recommendation is strictly for those that need some cheap speed. Eli White isn’t really going to help you out outside of stolen bases, but if that’s what you need, he’s a recommended pickup. Since May 10th, White has racked up five steals, pushing his season total to eight which is tied for the 5th most in baseball. This former 4th outfielder is now getting a chance to start for Texas, so expect him to continue running in bunches as long as he’s in the starting lineup.

Back in draft season, Alex Cobb was a popular late-round target for two reasons. Firstly, Cobb was coming off a solid showing with the Angels in 2021 where he posted a 3.76 ERA over 18 starts with a career-best 24.6% strikeout rate. But even more important than that performance was Cobb signing with the San Francisco Giants this offseason who have turned into the pitching whisperers of late. Unfortunately, that whispering hasn’t been heard by Cobb this season. Or has it?

On the surface, Cobb’s 5.61 ERA and 1.52 WHIP don’t make you want to hustle over to your league’s waiver wire. However, the underlying metrics are considerably better. Cobb hasn’t had lady luck on his side so far with an inflated .394 BABIP and only a 49.7% strand rate. Those two metrics alone are due for significant positive regression moving forward. Cobb’s ERA indicators back that notion up as well with his FIP sitting at 2.67, x FIP at 2.36, and xERA at 1.83. Outside of the indicators, Cobb has a minuscule 1.4% barrel rate, with a 7.9% walk rate and 28.4% strikeout rate, both of which are better than last season. Many other contact and swing metrics are in line with last season as well or even a bit better.

Cobb’s rough surface stats have caused him to be dropped in a ton of leagues, and he’s now available in over half of leagues. I’d highly recommend grabbing him now before his ERA and WHIP correct themselves.

After a rough start to the season, Nick Pivetta has really turned the corner over the last couple of weeks. Over his last three starts, Pivetta has allowed only two earned runs in 22 innings with a 0.50 WHIP, and 20/1 K/BB ratio. All three outings have been quality starts capped off by a complete game against Houston on Wednesday. While Pivetta has never stood out for fantasy purposes, he’s improved his whiff and chase rates this season and has seen the whiff rate on his three most used offerings (4-seam, curve, slider) all tick up this season. If you need an arm this week, I’d be willing to pick up Pivetta to see how long this hot streak can last.