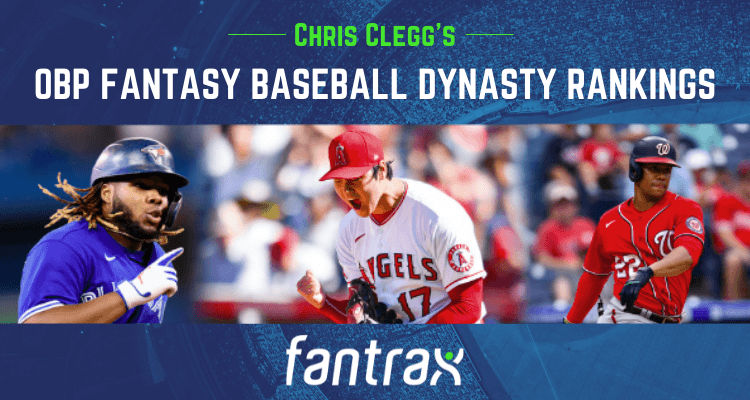 If you have found your way here, it’s likely because you are passionate about dynasty fantasy baseball. You have likely been following Eric Cross’s Dynasty Rankings for a long time, as I have. It is a privilege to publish rankings alongside his, as I have long considered Eric’s dynasty rankings to be an industry standard for Fantasy Baseball. As more and more people have become interested in OBP dynasty leagues, the need for OBP Fantasy Baseball Dynasty Rankings has become apparent. I have spent much time evaluating players from an OBP perspective as many of my dynasty leagues are OBP format. These are the rankings I use for my dynasty leagues.

There are so many factors that go into a set of dynasty rankings. Player’s current and future projected performance, age, and injury history all factor in. For prospects, it is important to weigh both their ceiling and floor, as well as their proximity to the majors. This list also focuses on OBP as this is a set of OBP Fantasy Baseball Dynasty Rankings.

Dynasty Fantasy Baseball is an ever-evolving game so keeping up on the latest dynasty values of players is important. I will continually update these rankings throughout the season and during the offseason to help you win your OBP dynasty fantasy baseball leagues.

How To Use These Dynasty Rankings

This list was created with values three to five years out. Values can drastically change pretty quickly due to a variety of circumstances. These rankings are not gospel in a draft room because strategy matters. This is how I currently value each player for OBP dynasty purposes.

These OBP dynasty rankings also give you an idea of trade values. It is not perfect by any means when negotiating a trade because every team is built differently, but this does give you a decent idea of where values lie when discussing trades.

A couple of important notes when looking at these rankings:

With the understanding of these things, it’s time for the list. Without further ado, the top-500 OBP Fantasy Baseball Dynasty Rankings.

Thanks for checking out my latest OBP Fantasy Baseball Dynasty Rankings. Be sure to check out all our other great content at Fantrax HQ to help you gain an edge in your league.