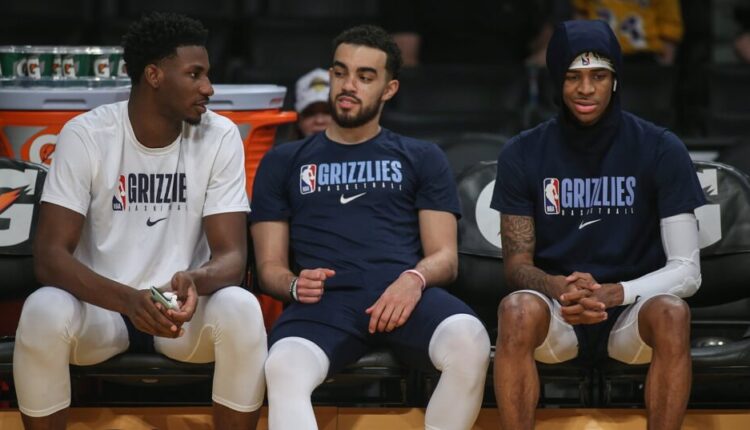 What an incredible NBA Playoff Tournament. Even the blowouts have been surprising. Some people might be enjoying the NBA playoffs without a care in the world, but here at FantraxHQ, we’re WORKING! With the NBA Conference Finals in the East and West underway, let’s take a look at the eliminated playoff teams and highlight one low-owned target you should have your eye on with offseason moves and draft picks in the future. For this article we’ll break down the West. Check out the East Edition as well to get the full picture.

Primo was used a lot down the stretch, with injuries to Dejounte Murray and Lonnie Walker. After they both got healthy, Primo still got his allotment of minutes. It appears the Spurs want to develop Primo. Whether it’s into a primary ball-handler is unlikely (Dejounte Murray will continue to lead the team in usage), but he can be a contributing member of your fantasy team for sure. Per 36 minutes, Primo averaged 11 PPG, 4 Rebs, 3 Asts, 1 StL, and 1 Blk. He’ll need to improve his 3 point shooting, with a sub 31% percentage, but that will come with his development. He averaged 19 minutes per game this this year, so it’ll take quite the jump to get him to starter’s minutes, but dynasty basketball is about patience. Keep Primo on your radar

Jose Alvarado became a name during the playoffs as the world finally got to see what makes him so special. Fantasy bball players knew about him long before the playoffs though. However, his performance on the biggest stage might’ve solidified his spot as a player for development in this organization. Despite his size, he’s a two-way player. He averaged 6 PPG, 2 Rebs, and 3 Asts over 15 minutes per game, but expect more minutes going forward. Per 36 minutes: 14 PPG, 7 Asts, 4 Rebs, and 3 STLs per game. That’s right THREE!. They don’t call him, “Grand Theft Alvarado” for nothin’.

The big man really made a name for himself down the stretch. Depending on matchups, he was getting more minutes than Zubac, the Clippers’ starting Center. The 24 year old is going to be part of the Clippers plans going forward, and while he’ll experience less usage, he’ll likely see more value when Kawhi returns to the team, as he’s a valuable ball distributor. Hartenstein averaged 8 PPG, 5 Rebs, and 3 Asts over 18 MPG, but he also shot just under 50% from three. He’s a very skilled big man, that I don’t project to see starter’s minutes unless there’s an injury, but he can provide value nonetheless.

The T-Wolves kept a fairly tight rotation, and I imagine their low-owned dynasty targets will come from the draft or offseason moves. There are rumors that they’re getting ready to move off of D’Angelo Russell, so anticipate more PG/SG help alongside KAT and Ant. Naz Reid and Jarred Vanderbilt are too frustrating offensively for me to target in fantasy.

It’s hard to believe the once feared Cousins has fallen into a low-owned fantasy category, but injuries will do that to ya’. The issue has never been production for DMC. When he’s on the floor, you can expect activity. It’s the role that has kept people away from him. He’s not locked in with the Nuggets, but I imagine with the journey Cousins has been on in his career, he’ll settle for the relationship he has with Mike Malone, as opposed to ring chasing. He’s settled into a nice role behind Jokic, and averaged 9 points, 6 boards, 2 assists, while shooting 76% from the free throw, and knocking down the occasional three pointer. If there’s ever an injury to Jokic, Cousins’ value skyrockets. Even without an injury, he’s worth the roster spot, relative to his price/ADP.

I know what you’re thinking: “What?!…He was depth of depth on Utah this year.” Yes. That’s true. The rookie averaged 9 minutes per game on the season, and what we saw didn’t necessarily blow our minds. However, the name of the game in fantasy is opportunity. And let’s be honest: it seems like Donovan Mitchell won’t be back to Utah next year. He wants out, Rudy Gobert wants out, Quinn Snyder may want out. It’s a situation in flux, and we should pounce on it before it happens. Butler could find himself in a 20+ minute role for his sophomore season. That’s nothing to sneeze at. Especially if there’s a redistribution of the team’s usage rates. Get in early.

The man is a free agent next year. Coming off of an incredible playoff run, and averaging 15/8/4, shooting just under 40% from three per 36 minutes, expect him to sign into a situation that gives him more than the 20 minutes per game that he was getting behind Ja in Memphis. He’s a starting-caliber point guard.

Saric injured himself at the end of the Suns’ playoff run two years ago, and ACLs take a while to come back from, so he was out this year as well. With the Suns choosing not to give DeAndre Ayton his max contract, and then not giving him his normal minutes load in a Game 7, I think the Suns and Ayton are getting ready to part ways. That said, while he’s not a natural Center, he is a big man that shoots threes (think Lauri Markkannen). Minutes will open up for Saric when he returns. His Per 36 minutes for his career: 17/8/3, 51% 2P%, 35% 3P%. Get him on your rosters while your fellow managers have forgotten about him.