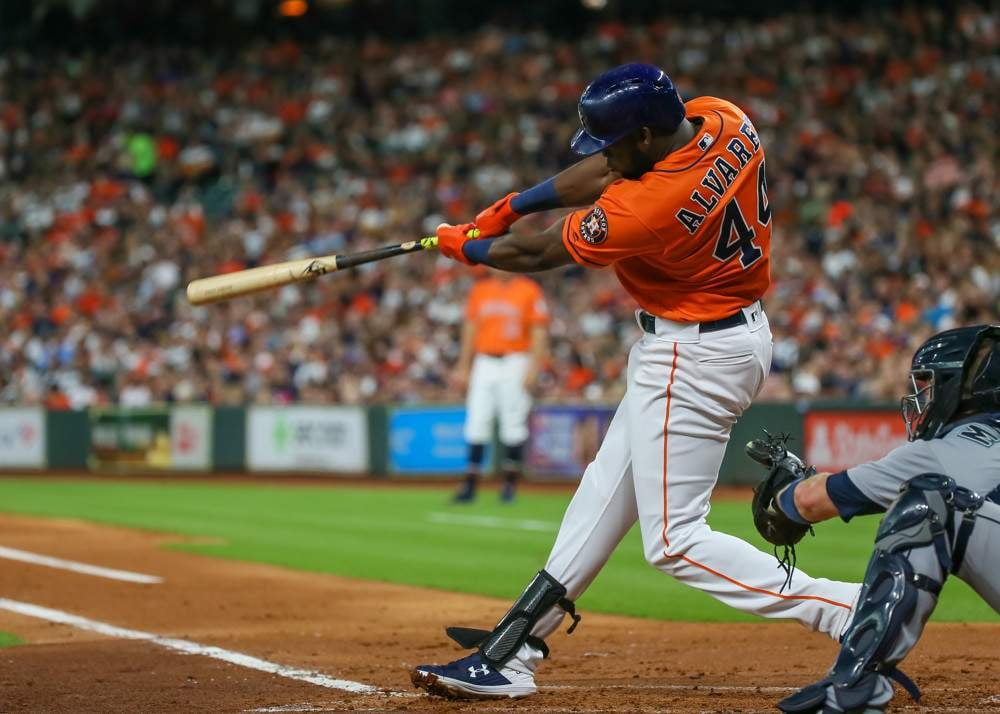 Regardless of what type of league you play in, we’re always searching for fantasy baseball values in each and every draft. Finding these values and scooping up players that are being slept on or that can outperform their ADP is a big part of crushing your draft and getting you one step closer to taking home that ship. Coming off a crazy 2020 season where we only had 60 games, the amount of values I’m seeing in 2021 drafts has been off the charts. There are so many values, I can’t list them all in one article. So, I’m going to make this into a multi-part series discussing the best fantasy baseball values of the 2021 season. First up are the outfielders and a potential top-25 bat you can get close to pick 100.

*All ADPs are from NFBC since January 1st

This one is easy. From the moment Yordan Alvarez stepped foot in a Major League batters box for the first time on 6/9/2019, he’s been a nightmare for opposing pitchers. From that day on, Alvarez slashed .313/.412/.655 with 27 home runs and 26 doubles in 87 games. He only played two games in 2020 due to knee issues, but still cranked a homer in his nine plate appearances. That rookie domination was no fluke either. Alvarez finished in the top-10% of the league in xBA, xOBP, xSLG, xISO, xwOBA, barrell%, exit velocity, hard-hit%, and walk rate. Most of those were in the top-6%. Simply put, Alvarez was a monster.

Now, after missing 99% of the 2020 season and coming off knee surgeries, his ADP sits comfortably in the back-end of the top-100 at 81.2. That’s a damn steal. You tell me how often you can nab a hitter at that part of your draft that has a legit chance to put up a .290+/40+ season with 200+ R+RBI? The reports regarding his knees have all been positive, and it definitely helps that Alvarez doesn’t have to play the field often. With his four-category upside hitting in the middle of a good Houston lineup, all he has to do is stay healthy to return great value this season.

For what Ramon Laureano can bring to the table, having an ADP near 150 just seems silly. Yes, Laureano wasn’t good in 2020 and burned those that used a top-100 pick on him. But he also was a top-50 player for the majority of 2019 and even a top-25 player for a couple of months after he was recalled from the minors. He wasn’t nearly as bad as his 2020 surface numbers would suggest either. Sure, Laureano isn’t a statcast darling, but he’s recorded a 76th percentile or better sprint speed in 2019 and 2020, and also posted a 66th percentile xwOBA, 60th percentile barrel rate, and 71st percentile BB% which was nearly double his 2019 showing.

On top of that, Laureano is the favorite to lead off for an Oakland lineup that could be pretty good in 2021. With his ability to hit 20+ home runs, steal 15-20 bags, hit for a respectable average, and tack on 90 runs hitting leadoff, getting him close to pick 150 is great value.

If you can get Ian Happ after pick 150 in your draft, you should be extremely HAPPy. Sorry, you all should know that dad jokes are kind of my jam. It feels like everyone in this Cubs lineup is a draft day bargain in 2021 and Happ is the biggest steal of them all if you ask me. The former top prospect has quietly performed admirably in the Majors to the tune of a .344 OBP and .481 SLG and was even better in 2020, posting a .258/.361/.505 slash line with 12 homers in 57 games.

Like with Laureano above, Happ is likely going to lead off this season and will have Anthony Rizzo, Kris Bryant, Willson Contreras, Joc Pederson, and Javier Baez hitting behind him. If Happ continues to walk at a high rate (13% in 2020, 12.2% for career) and gets on-base at a .350+ clip, there’s an outside chance he flirts with 100 runs scored in 2021.  Add in the potential for 30-plus homers and Happ might just be a top-100 player this season, especially in OBP formats. Happ’s power is very legit and backed up by his 84th percentile exit velocity, 89th percentile hard-hit rate, and .446 xwOBACON.

While his ADP has steadily been creeping up over the last two months, I’m still grabbing all the Trey Mancini shares I can at this incredibly reasonable price tag. Unfortunately, Mancini had to deal with cancer in 2020 and all the treatments that went along with it, thus causing him to miss the entire season. But that’s all behind him now and pre-Cancer Mancini was a force to be reckoned with, especially in 2019.

Above are Mancini’s 2019 savant sliders. Those aren’t bright red or anything, but 71st percentile or better in all six metrics isn’t anything to scoff at. Add in the fact that Baltimore’s lineup is better now than it was in 2019 along with him getting to play over 3/4 of his games in hitter-friendly ballparks, and you have a good chance that he returns to pre-2020 levels or production or at least close to it. If Mancini went .280+/30+ with 175+ R+RBI in 2021, I wouldn’t be surprised at all.

According to Steamer projections, every single player in the Yankees starting nine is projected to hit 20-plus homers this season. That obviously includes Clint Frazier who has a starting spot locked up in a loaded Yankees lineup. It honestly doesn’t matter if he’s hitting 7th in this order with the names that will still be around him. If he does slot in there, which is likely, he’ll have Gio Urshela and Gary Sanchez hitting behind him and probably Luke Voit and Gleyber Torres directly in front of him. If Frazier can even come close to his .394 OBP from 2020, he could easily push 175 R+RBI in 2021.

Seeing Frazier’s ADP this low is surprising. He’s a former top prospect coming off a .267/.394/.511 slash line in 2020 with a 95/30/100/10 pace. And did I mention he’s a Yankee? Pretty sure I did. Outside of K% and whiff%, Frazier was above-average across the board with his offensive savant metrics last season, highlighted by an 82nd percentile barrel rate and walk rate. Frazier’s offensive capabilities in New York’s lineup give him a great chance to replicate those 2020 numbers and finish the 2021 season as a top-100 fantasy asset, maybe even top-75. And the fact that you can get him after pick 160 makes him one of the top fantasy baseball values this season.

The name Mark Canha isn’t quite as buzzy as the other names on this list, but he’s consistently being undervalued in drafts. And being undervalued is the name of the game when hunting for fantasy baseball values. This especially goes for you in OBP formats. Over the last two seasons, Canha has flirted with a .400 OBP, finishing with a .396 mark in 2019 and .387 in 2020. I’m not saying Canha is going to break out and finish as a top-100 player, but he definitely has the skillset to return a solid ROI at this ADP.

In each of the last two seasons, Canha has posted a top-10% walk rate, a 68th percentile sprint speed, and was above-average in most quality of contact metrics in 2020. Those did slide a bit in 2020, but Canha still posted a 73rd percentile xwOBA while pacing at 15 homers, 10 steals, 90 runs, and 90 RBI. If Canha’s power ticks back up in 2021, this ADP is going to look like a steal. As of now, it looks like he’s going to hit high in Oakland’s order too.

Outside of Yordan Alvarez, this might be the best outfield value pick for the 2021 season. The last year and a half or so was rough for Mitch Haniger, to say the least. Haniger had to deal with a back issue and a ruptured testicle that caused him to miss all of the shortened 2020 MLB season. Ouch! But before 2020, Haniger was a highly-valuable fantasy bat that probably didn’t get the credit or hype that he deserved. I’m doing my best to change that here in 2021.

Things you love to see: This. pic.twitter.com/s8NI1p0GOm

As a Red Sox fan, it pains me to put two Yankees on this list, but Aaron Hicks is a great value pick this year. Remember how I was talking about how Clint Frazier could still rack up plenty of runs and RBI hitting 7th in the Yankees monster lineup? Well, Hicks might hit 3rd, right between the bash brothers known as Aaron Judge and Giancarlo Stanton. A healthy Hicks could realistically push 200 R+RBI this season hitting in this spot, but as we all know, staying healthy for an entire season hasn’t been something Hicks has done very often in his eight-year career. In fact, Hicks has only exceeded 100 games played twice, playing 123 in 2016 and 137 in 2018.

If MLB played a full 162 games in 2020, Hicks might’ve had his third 100-plus games played season as he suited up in 54 of the Yankees’ 60 games. When drafting Hicks, a lot of it comes down to roster construction up to that point in the draft. If you have a good offensive core that you feel safe with, rolling the dice on Hicks could pay big dividends. Just don’t expect a high average as Hicks is a career .235 hitter and hit .225 in 2020.

Other Fantasy Baseball Values in the Outfield