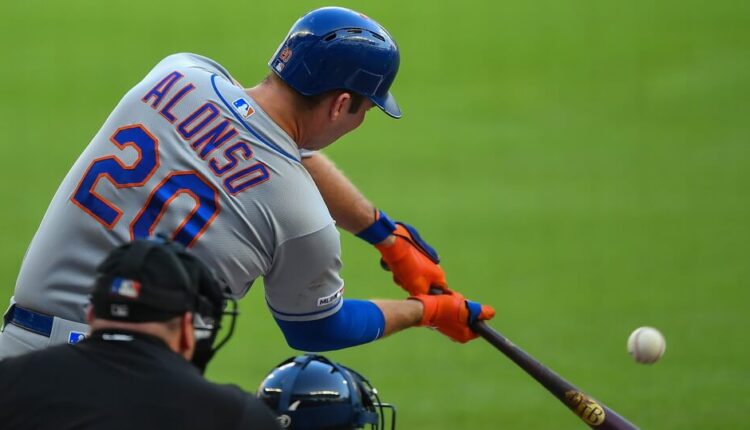 Coming into his rookie season, the expectations were sky high for the young slugger. The Mets knew they had a talented bat in their possession, but few expected him to mash a whopping 53 home runs in his rookie season. It was a magical year filled with promise and hope surrounding Alonso and the future of the Mets’ franchise. Then COVID struck, a shortened season followed, and Alonso struggled to replicate his 2019 success in the 2020 sample size. Between the variables Alonso couldn’t control and still being in the developmental phase of his MLB career, there’s little reason to put much stock into his 2020 struggles. He’s an extremely talented player who had a rough 60 game sample size. Pete Alonso is here to stay and I’m going to explain why.

In a 2016 scouting report by Prospect Junkies, they had this to say about Alonso’s potential,” In a draft short on college pop, Alonso’s raw power stands out. There is natural loft in Alonso’s swing, which when coupled with great arm extension and a powerful lower half, produces light tower power when the ball is barreled.” Again, this was in 2016. His raw power has always been evident and will always be his most touted attribute as a professional baseball player.

Alonso was drafted 64th overall in the 2016 MLB Draft by the New York Mets. The Mets didn’t even bother assigning Alonso to their rookie ball team and assigned him to their Short-A affiliate, the Brooklyn Cyclones in July 2016. Over the first 109 at-bats of his professional career, Alonso hit .321 with 5 home runs and a .969 on-base plus slugging percentage. Right out of the gate, Alonso’s skills were obvious. He knew how to get on base at a solid level, his hit tool was solid and his power was on full display–the baseball world was starting to see that Alonso was the real deal.

In 2017, he proceeded to hit .289 over 353 at-bats, as well as mashing 18 home runs playing for the St. Lucie Mets and the Binghamton Rumble Ponies, the Mets’ High-A and Double-AA affiliates. He was finally promoted to the Las Vegas 51s in 2018, the Mets’ former Triple-A affiliate. There, hit 36 home runs with a .285 batting average and a .975 on-base plus slugging percentage over 478 at-bats. At this point, it was clear by many that Alonso was ready for the big leagues. Notably, his strikeout percentage did slightly rise while playing in Triple-A, from a career average of 18.1% to 25.9%. This is understandable, as Triple-A arms are largely MLB ready-arms. More than likely, a strikeout percentage between 20%-25% will be the norm for him as a major leaguer.

At this point, the Mets knew they were getting a strong power bat who wouldn’t be a complete liability in the batting average department and would get on-base at a decent clip. In short, there wasn’t much left for him to prove at the minor league level. Alonso was gifted with a spot on the Mets’ Opening Day roster in 2019 and the rest is history. In 2019, he became the first rookie in MLB history to hit 50 home runs and 30 doubles in a single season. Aaron Judge is the only other rookie in MLB history to hit 50 home runs in their rookie season; elite company. Entering the 2020 season, the bar Alonso had set for himself was sky-high. However, between COVID and the shortened season, it seemed at times Alonso was trying too hard to produce at the plate. He hit just .231 over 208 at-bats.

Former MLB utility man and manager Bobby Valentine had this to say about Alonso’s 2020 struggles, “It was a perfect storm for Pete to fail…For a guy who had only played a year in the big leagues, he was dealing with the greatest expectations of anybody in a Met uniform since a young Darryl Strawberry.”

“And then the shortened season worked against him. There’s an ebb and flow over a 162-game season for a big guy with a big swing. The home runs tend to come in bunches. When he started slow, he didn’t have the kind of time to hit his stride naturally, and you could see there was a little panic. He started trying to force it, knowing he only had 60 games, and that made everything harder.”

The cards were stacked against Alonso in 2020. How he performs going forward has a lot to do with how hard he tries to limit mistakes when at the plate.

For a power hitter of his caliber, Alonso has some solid plate discipline tendencies. Even dating back to his minor league days, he’s always been able to draw walks at a respectable rate. To be specific, he’s had a walk rate of at least 10.0% in every season since 2018. Furthermore, in the chart below, we can see that Alonso’s plate discipline metrics have remained very constant over his first 932 MLB plate appearances.

His plate discipline metrics have hovered around league average to start his MLB career and more than likely, they won’t stray too far off from these marks in the future. He’ll likely never be a 90.0%+ zone contact guy, or even an 80.0%+ contact guy. But given his power contributions, he doesn’t need to be a high contact hitter. A batting average range of .250-.270 will allow Alonso to not be a complete bust in that department, while also hitting for power at an above-average rate.

Additionally, the majority of his swinging metrics actually sit slightly above league average, which is a good sign. If Alonso is too passive at the plate, his batting average could sink, making him more Rhys Hoskins-esque. And while Hoskins is a fine value at the right price, but we don’t want to draft his type of profile within our first five or six picks (unless it’s an OBP league). As a whole, Alonso will probably never be a high contact hitter and he doesn’t need to be, he just needs his contact metrics to sit at respectable levels. And simultaneously, he needs to keep swinging at a slightly above average rate to keep his batting average in the .250-.270 range.

While Alonso has terrific power, the majority of his batted balls are pulled.

As we can see, he has a 45.1 pull% so far in his MLB career over 565 batted ball events. Even more, about 55.0% of his career home runs have been pulled. This tendency of his contributes to capping his batting average ceiling. It’s almost impossible to consistently hit for a high average while hitting to your pull side at an above-average rate. However, given that around 30% of Alonso’s annual hits will be leaving the ballpark, his pull% won’t hurt him anymore in the future than it already has.

Beyond that, Alonso has never been too one-sided with his ground ball or fly ball rates, or vice versa–he always demonstrates a healthy mix. At every stop of his professional career up to this point, his GB+FB% has been above 80.0% and his line drive rate has never been above 18.8%. In other words, where his batted balls go in the field have always been consistent, and given his overall approach, this will likely remain the case going forward. He’ll continue to have a FB% that just edges his GB% while having a consistent LD%. As a whole, most of Alonso’s batted balls go to his pull side and most will be a typical ground ball or fly ball. This ultimately helps us better understand his floor going forward and how he’ll come about his future production.

Now, we know Alonso likes to pull the ball and put the ball in the air, but how is the quality of this contact he’s making?

Up to this point, we know that Pete Alonso is a pull-heavy hitter who swings at the ball at a slightly above-average rate. We also know he’ll hit the ball in the air often with high-end quality of contact skills. But how does he fare against different types of pitches and pitchers?

It’s clear that Pete Alonso does not struggle against breaking pitches in general. In his MLB career, he’s hit .253 vs sliders but just .143 against curveballs. So Alonso struggles mainly when facing curveballs, not breaking pitches in general. However, his .127 career BABIP vs curveballs could imply there’s been a hint of bad luck surrounding his success vs curveballs. Nonetheless, if he improves his batting average and production vs curveballs, we could see Alonso hit for a slightly better batting average in the future.

In regards to his success against left-handed pitching and right-handed pitching, he’s been more productive against RHP.  To be specific, he has a .226 batting average against LHP and a .263 batting average against RHP over the course of his MLB career. In 2019, these splits sat at .240 vs LHP and .266 vs RHP. So his struggles in 2020 likely resulted in his overall splits looking worse than they really are.

To further back this theory, in his minor league career, he hit .409 vs LHP in 2016, .367 in 2017, and .283 in 2018. He can hit LHP, he just needs more sample size to prove that he can as a major league player. In all, Alonso doesn’t have any true weaknesses when it comes to facing certain types of pitches and pitchers besides his low career batting average against curveballs. He’ll more than likely improve his success against curveballs as his sample size against them grows.

When we put all the pieces of Pete Alonso’s overall profile together, we see a player who will continue to hit for plenty of power but will also continue to have a middling batting average unless he makes some adjustments. Specifically, hitting the ball to the opposite field more as well as having better success against curveballs. Beyond that, we know he’ll continue to draw plenty of walks and have a solid annual on-base percentage.

Alonso is not a finished product, with there being a realistic path to him becoming an even better hitter when at the plate. If he makes the necessary adjustments remains to be seen, but the Pete Alonso we see right now remains a high-end fantasy asset. Any given year, he has .260/40 home run potential and that’ll play in any fantasy format. Alonso is easily a top-10 dynasty 1B option right now and should be treated as such in dynasty leagues.

Per NFBC, Alonso currently has an average redraft ADP of around 57th overall. At this price in category leagues, you can grab your five-category studs or aces early only to draft him later for his extremely valuable power numbers. In points leagues, home runs among offensive players are king and while his career 26.2% strikeout rate will hurt you a bit, his production should be able to overshadow his above-average strikeout rate. As a whole, Alonso will be a very valuable fantasy asset in 2021, as long as you draft him where he likely deserves to be drafted.

In regards to his general struggles in 2020, it’s important to remember that 2020 was nothing more than a small sample size of games. If 2020 was a normal season, Alonso would’ve had plenty of opportunities to adjust his mindset and make the necessary adjustments at the plate, but there just wasn’t enough time. Heading into 2021, Alonso has had an entire offseason to analyze what went wrong and how he needs to adjust his mindset when at the plate. Per Alonso himself, he stated he’s “feeling dangerous” heading into 2021, a promising sign that 2020 didn’t devastate his confidence. Pete Alonso is just 26-years-old and is close to entering his prime years. He hasn’t given up on himself, and we shouldn’t be so quick to give up on him.