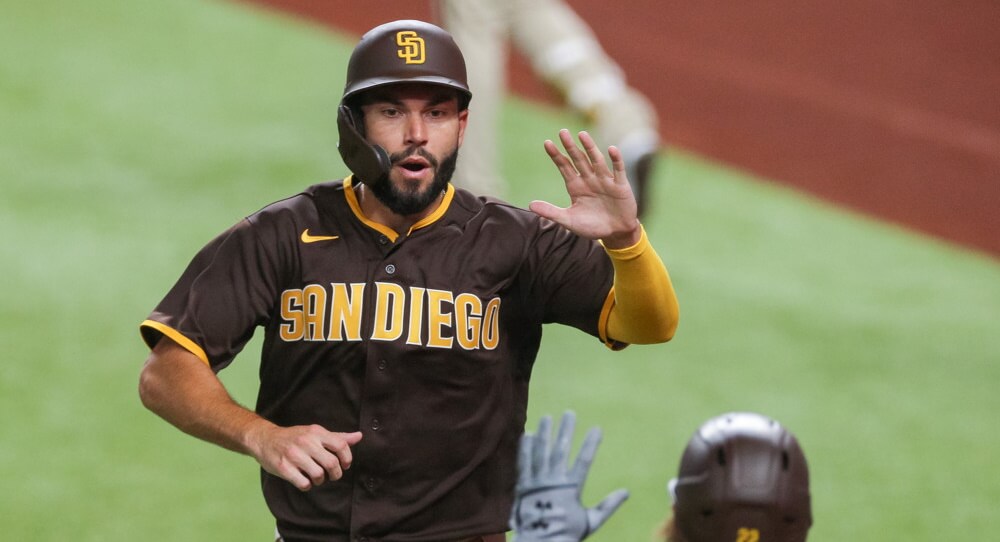 What a big week of news across Major League Baseball! We had Kim Ng become the first woman GM in the history of baseball. Looking at her amazing track record, this was long overdue. Did anyone see Theo Epstein stepping down? I certainly didn’t. We also had a big PED suspension, another victim of TJ surgery, and the hot stove has begun to heat up some with a few free-agent signings. I wonder what will be in the cards next week when I write the next article? In a season in which a global pandemic was occurring and we only had 60 games of data, it is incredibly hard to make assessments about players and their performances, and that includes Eric Hosmer, who I’ll be looking at in this article.

This offseason, I’ll be doing a series of articles looking at what went right, what went wrong, and the overall 2021 outlook for certain players. I can only take into account the data that has been given and use that to best assess what to expect from each player in 2021. This should be fun! Let’s dive into our next player in this series: Eric Hosmer.

What Went Right for Eric Hosmer in 2020

First, congratulations to Eric Hosmer on his engagement to longtime girlfriend Kacie McDonnell. Regardless of this breakdown, he seems to be making positive strides for 2021 in this regard alone. Now to some actual analysis. One of the biggest holes in Hosmer’s game going into 2020, was his inability to put the ball in the air. In fact, he’s had a 56% or higher GB rate since 2016. If Hosmer was going to become a productive fantasy player, he was going to need to decrease this.

In the offseason, it came out across many news outlets, that Hosmer had refused to change his swing until now. He had wanted to stick with what got him to where he was and didn’t want to entertain such a thought. Seeing the direction of where baseball is headed, he agreed to rework his swing. The results in terms of cutting down his ground balls were tremendous.

Hosmer not only cut nearly 13% of his GB rate in 2020, but upped his Line Drive rate to a CAREER best at over 30%. This is a big reason he was on an over-30 HR pace when he had never hit more than 25 in his career. This also tied in the fact that he started pulling the ball more (his highest percentage of pulled balls in his career) and seemed to have an overall more comfortable approach at the plate with this swing change to lift the ball more.

The counting stats on Hosmer look great, but let’s dive underneath the hood here and see if the analytics match his production. Let’s first take a look at his BABIP (batting average of balls in play). This can sometimes determine if a hitter is deemed “lucky” with a higher BABIP and that could very well regress their average the following season. Hosmer had a BABIP of .296 in 2020, which was his lowest since 2012. This shows that Hosmer did not get the ball “bouncing” his way in a sense, and could have had even better stats with a BABIP like he’s had from previous years.

One of the best stats to assess a player’s value is their wRC+ or weighted runs created. Anything over 100 is above average and anything below 100 is below average by this metric. Hosmer had a wRC+ of 127, which was the second-highest of his career and highest since 2017. That’ll work. Hosmer also tied his career-high in exit velocity at just under 91 mph and established a new career-high hard-hit percentage at 47%. This also coincided with his barrel percentage reached 10% for the first time in his career.

Lastly, looking at Hosmer’s expected stats, they were all in line with this breakout. His xBA, xSLG, and xwOBA ALL were within 4 points of his actual stats. That means that Hosmer’s numbers were not something that would come cratering down and he was maintaining consistency. At a thin position such as first base, that is huge.

Better Feel of the Strike zone

While we are going to address Hosmer’s sorry walk rate later on, Hosmer did a lot better in terms of his improvement of the strike zone. We first look at Hosmer’s strikeout percentages and they had uncomfortably climbed to over 20% each of 2018 and 2019, after being sub 20% his first 3 years. Luckily, Hosmer brought that number back down in 2020 as he K’ed just under 18% of the time. This was also his first time in 3 years cutting down his strikeouts.

Another big aspect of Hosmer’s understanding of the strike zone was his big jump in contact outside the strike zone or O-Contact%. Hosmer’s O-Contact% was 69.5% in 2020 or nearly 20% higher than his 2019 numbers and the highest of his career. This was big because Hosmer kept a similar chase rate to his 2019 percentage but seemed to be able to see the ball better to make more contact outside the zone. This also was aided by a 5% increase in first pitch swing% and showed an overall more aggressive approach at the plate.

Improved Against All Types Of Pitches

A big surprise I got from looking at Hosmer’s profile was his improvement on each type of pitch he saw:

The improvement versus the breaking ball might have been the most impressive as he jumped his xBA 58 points and cut his whiff rate against that pitch 16%! That was how it was across the board for Hosmer as all his whiff rates against these pitches went down and all the batting data went up. A very big positive when assessing Hosmer for next season.

We always look as a hitter progresses in their career for them to have a good eye at the plate when their bat speed begins to slow down. Hosmer has actually seen a negative trend in this regard. He has had his walk rates go down each of the last four seasons. Hosmer went from walking 9.8% to 9.2% and then 6% to 5.8%.

Any hitter walking less than 6% of the time needs to REALLY have it together in almost every other area and Hosmer does not. If Hosmer is to become a complete hitter, he’s going to need to be able to learn to take more walks. This should also hopefully create better pitches for him to handle at the plate when pitcher’s know he’ll actually take a walk.

Scary End of the Season

Lost in Hosmer’s breakout season, was the disastrous turn it took at the tail end of the year. Hosmer was EVEN better up until the last month of the season. Below are his stats over his last 12 regular-season games in September and his Playoff statistics.

As you can see, it was not just a slump over a couple of weeks, but rather 18 games of data in Hosmer’s 38 regular-season games and all his playoff appearances. Percentage-wise, this makes up roughly 41% of Hosmer’s season when you combine everything. In a shortened season where we were not able to see how everything plays out and cannot have a full season’s worth of data, this is scary.

Outlook for Eric Hosmer in 2021

Eric Hosmer made a lot of positive strides to his game in 2020 that we can look at as vast improvements from his previous profile. The biggest one of course being the ability to put the ball in the air more this season.

It still remains to be seen if the increased loft will continue. Hosmer’s track record shows him having these spikes of production but not always be consistent. There also needs to be taken into account his groundball percentage steadily rising over the course of 2020.

There’s certainly more reason for optimism however these days with Hosmer compared to 2019. He looks to have made some changes to his profile that will hopefully keep him off of one of the worst contracts in the sport. If I were looking to draft Hosmer, it needs to be at the right price.

The days of him being basically free during drafts last year are over. In the 2EarlyMocks ADP, Eric Hosmer is going around pick 148 or the 12th first baseman off the board. While I do not have a problem with this spot, there are a lot of first baseman with higher upside going after him that I may wait on if Hosmer’s draft price stays in the top 150. Draft Hosmer to look to provide a safe option but not to be a league winner at the position.