Dynasty Football Stock Watch: Jacoby Brissett, The Best a Man Can Get 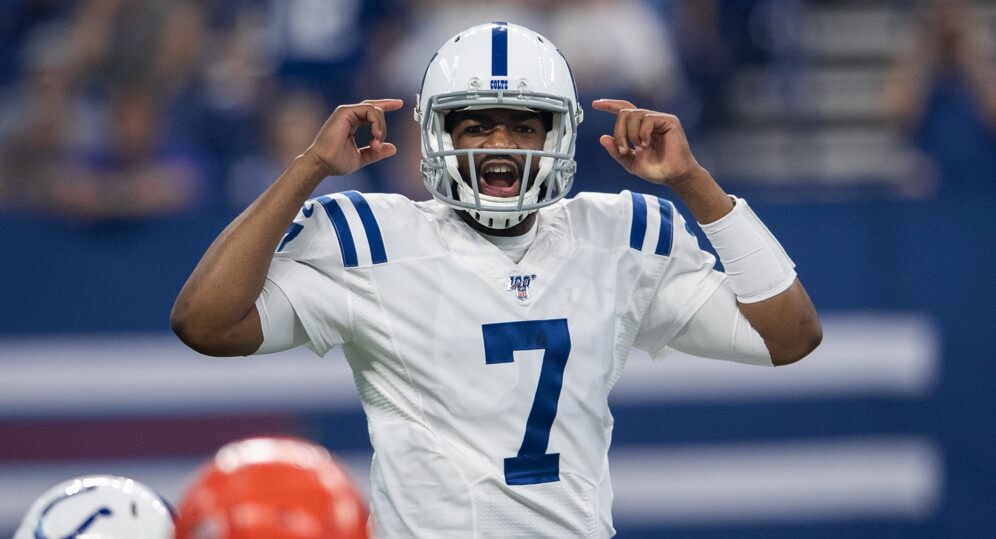 It’s so hard to say goodbye to yesterday. As a recently widowed Andrew Luck dynasty owner, It’s been difficult to come to terms with his retirement. He was destined to dominate for the next decade. We were going to grow old together. But the times they are a-changing, and it’s time to fully embrace the new face of the Indianapolis Colts. It’s Jacoby Brissett season.

After you get done here, head on over and check out my latest Dynasty Football Rankings!

The Indianapolis Colts have been a Russian nesting doll of shoes to fill at quarterback. They’ve passed the baton from Peyton Manning to Andrew Luck to Jacoby Brissett. And somehow, each one has risen to the task of becoming a franchise star in their own right.

When Andrew Luck abruptly retired before the season, many assumed Jacoby Brissett would be little more than a serviceable starter until something better came along. How do you replace a guy like Andrew Luck anyway? But the Colts have routinely talked up Brissett over the years and we’re starting to see exactly why they’ve been fawning over him.

Similarly to Dak Prescott as mentioned last week, Jacoby Brissett is seizing his opportunity in an ideal situation. Adequately protected, and surrounded by an abundance of weapons, Brissett has been making good decisions and distributing the ball efficiently. While possessing middling athleticism for the position, he’s shown a willingness to make plays with his legs when necessary.

Brissett has completed an impressive 71.7% of his passes and now owns a 7:1 touchdown to interception ratio. His perceived value should skyrocket as his passing volume continues to rise, so it would be wise to invest in Jacoby Brissett before he’s too expensive to acquire. He’s a top 15 dynasty QB.

A few months ago, Darrell Henderson was the toast of the dynasty community. Amid alarming footage regarding the health of Todd Gurley’s knee, Henderson seemed poised to command a large role in one of the league’s most fertile offenses. He’s going to give us a Kamara element!

Rams considered getting Henderson at No. 63. Snead said he gives the Rams a “Kamara element.” pic.twitter.com/nsuZePPb8H

In reality, Henderson’s closest comparison has been The Invisible Man. While his Memphis film is seemingly one explosive play after another, there were concerns that Henderson was running through rather generous running lanes. Today, those concerns seem to have plenty of merit. Through Darrell Henderson’s first taste of professional football action, he has achieved yards-per-carry averages of 2.2, 2.7, 2.5, and 0. Henderson has consistently displayed an absence of vision that could weigh heavily over his career prospects.

With both Gurley and Malcolm Brown functioning at a high level, the Rams have relegated Henderson to just two offensive snaps on the regular season. While his receiving acumen saves some of his dynasty intrigue, his upside is probably no higher than a situational third-down running back.

For such a seemingly safe player, N’Keal Harry’s dynasty stock has endured some volatile shifts already. Drafted into one of the most appetizing situations, Harry was poised to dominate targets for the Patriots. Then Josh Gordon was reinstated. And then N’Keal Harry landed on the Injured Reserve. And then the Patriots signed one of the greatest wide receivers of all time. Harry’s value has been in a steady nosedive for the last few months.

If you were looking for the time to buy N’Keal Harry, this is it. Stop reading this article. Go text whoever owns Harry in your league. And then text your mother that you love her. You really should make more of an effort, you know.

Now that Antonio Brown and his accompanying circus have officially left town, a barrier to opportunity has been removed for Harry. He’s also three weeks closer to a possible week 9 return. In the meantime, Phillip Dorsett has been a popular waiver wire addition, as he has averaged 5 receptions for 74 yards and 1.5 TDs over the two games without Antonio Brown. If Dorsett can thrive under such an opportunity, imagine what a player like N’Keal Harry could do.

After entering 2019 with some sophomore optimism, Dante Pettis has failed to break 50% of the 49ers offensive snaps in each game of the season thus far. While his rookie season seemed to show plenty of promise, one has to wonder if his production was inflated due to lack of competition at the position.

Seemingly in Shanahan’s dog house, Dante Pettis will need to string together consistent performances on the playing field if he’s going to earn the role he was projected to earn by now.

Lauded for his blocking ability, scouts wondered if Dawson Knox should have had a larger role in Ole Miss’ passing game. They may have been on to something. As a rookie, Knox has secured the primary TE role in each of his first three NFL games and capped off Week 3 showing off his athleticism. The Bills passing game is showing surprising viability, and perhaps their tight end position could become a source of unexpected fantasy value.

Dawson Knox. You love to see it. #CINvsBUF | #GoBills pic.twitter.com/ovMqiUTmZN