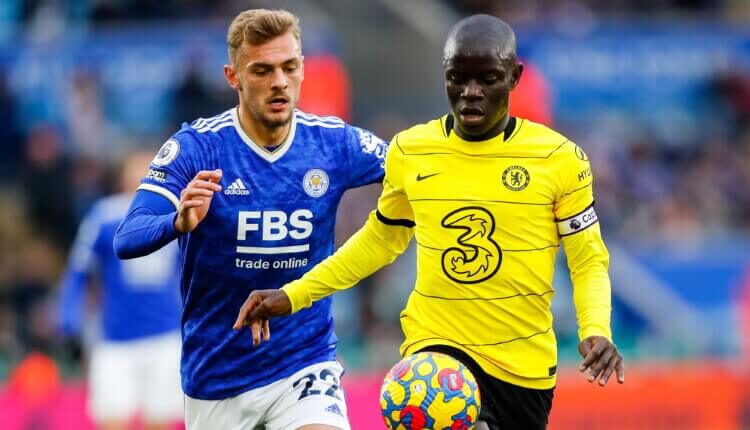 Getting your team selection correct in Draft Premier League is just as essential as your pre-season draft or your weekly waiver wire claims. And that’s exactly why we’re here to help with our Gameweek 33 Start and Sit article! We’re here to help you with some of the big Fantasy EPL decisions you may need to make for the upcoming fixtures. 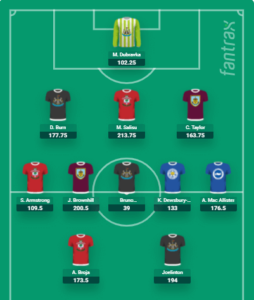 Gameweek 33 brings us another large double gameweek with 7 teams playing twice. As such, our starters will naturally be from those teams, particularly those with good matchups. Newcastle may have the best combo of matchups with Crystal Palace and Southampton at home. We recommend starting pretty much any of their own starters, but in particular we like the under-rostered Martin Duvbravka, Dan Burn, Bruno Guimaraes, and Joelinton. The defenders and keeper have a 28% and 26% chance of keeping clean sheets, and Bruno and Joelinton are very likely to get 2 starts with Joe Willock out injured and should get plenty of ghost points. Southampton are another good team to target with a recently struggling, Arsenal at home, and Burnley away. Salisu has 24% and 20% cleansheet odds. Armstrong has a 23% chance at a goal and 21% at an assist, while Broja has a 38% chance at a goal and a 21% at an assist. Besides those 2, we like Burnley who have West Ham away and Southampton at home. Our DGW go-to in Josh Brownhill is back, and despite only getting 6 points in his last DGW, he showed his worth again last week, scoring 13.5. Two more under-rated midfielder maestros in Kienan Dewsbury-Hall and Alexis Mac-Allister round out starters. Both mids have been constant features in their mid-table sides and their generally, middle-of-the-road scores multiplied by two look awfully good this week. 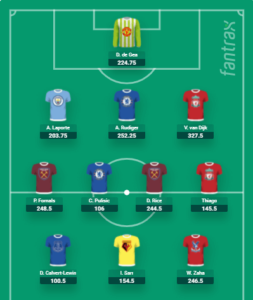 This week our sits team floor is raised significantly with a lot of the poor teams either having double gameweeks or good matchups. However, we will still offer the 11 usually-started players who we think that you should consider benching as their relative value this week is insufficient. At the back, we have 3 of the best center backs for the three best teams in the league: Van Dijk, Laporte, and Rudiger. All are great on their days but face United, Brighton, and Arsenal and have single gameweeks. With a tricky matchup each, a resulting likely loss of a clean sheet could lead to a low score for these three when you could instead gamble on the higher expected value of a Burnley defender or the like. In midfield, despite playing at home to Burnley, we’re opting to bench many West Ham mids including Fornals and Rice. Fornals has been in dreadful form in the EPL (3.5, 2.5, 4.5 in his last 3 starts) and Rice does not have the ceiling to justify his inclusion in a SGW. Pulisic is a boom or bust option who you shouldn’t bank on starting in a midweek game, and Thiago, like Rice is a middling option with a tricky matchup this week. Up top, we’re opting to bench Calvert-Lewin who has been in dreadful form (and might even get benched), Sarr who’s floor is nonexistent, even against Brentford, and Wilfred Zaha who has played well recently, but faces a much-improved defensively Newcastle. Again, most of these options are reasonable starts when compared to any other SGW option, but in the context of a large DGW, you should be able to find plenty of streamers who are likely to score more on average!