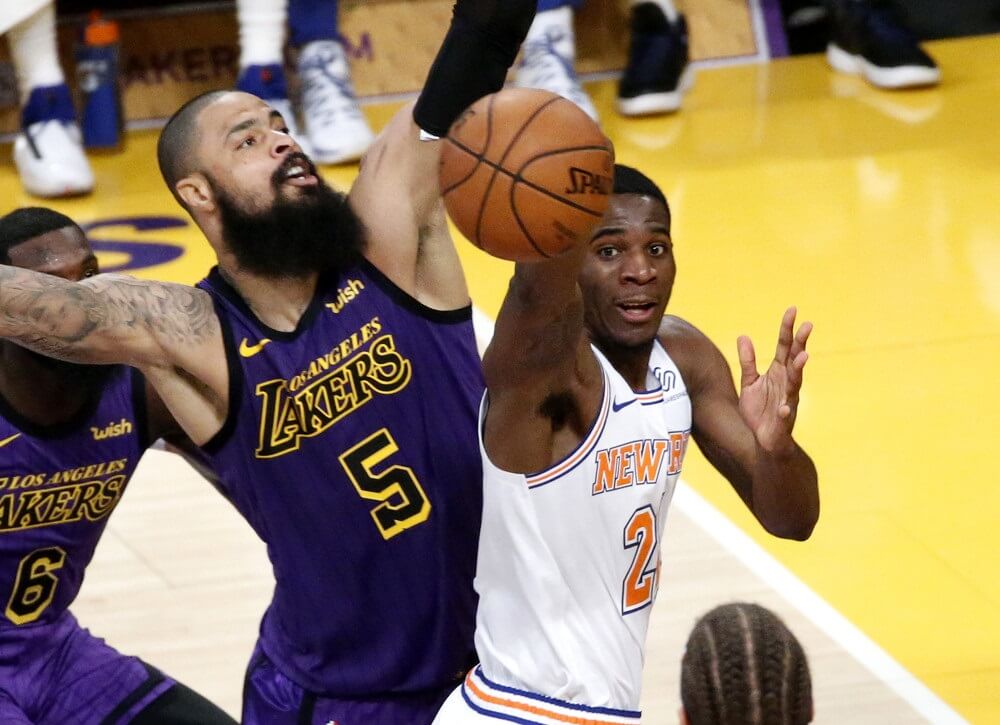 The fantasy basketball season is rapidly approaching its conclusion with only a handful of teams still active in most head-to-head leagues. Streaming and rostering is going to be of the utmost importance, with games played likely factoring in many results. Damyean Dotson is balling out right now and appears to have settled into a sizeable role on a nightly basis. Over his last eight games, he is averaging 17.3 points, 5.5 rebounds, 2.9 assists, and 2.7 three-pointers. The Knicks play four games this week and so Dotson becomes basically a must-roster player in all formats.

The Pistons will travel to Cleveland just 24 hours removed from defeating the Raptors. It was a big win for the Pistons who are looking to lock up a playoff berth over the next couple of weeks. Wayne Ellington had hit multiple three-pointers in four straight games prior to Sunday and in what will be a much more favorable matchup, could begin that streak again Monday.

The Cavaliers could be without Kevin Love who is questionable with what appears a minor back concern. They are going to be cautious with Love and have little incentive to push him if he isn’t fully healthy. If he is ruled out, Ante Zizic could be in for a big night, making him worth considering in competitive formats. Marquese Chriss could also find himself in a bigger role but is too hard to trust at this point.

The Jazz are looking to win their fourth straight game Monday, as they hunt down a top-four seed in the West. They currently sit just two games back of the fourth-seeded Trail Blazers and so their goal is a definite possibility. They come up against a Wizards team that is beginning to lose touch with the playoffs themselves and will need to win to keep their hopes alive.

The Wizards need to win almost every game from here on but will find it tough Monday coming up against a surging Jazz team. They got lucky when Tomas Satoransky was cleared of a concussion prior to their last game, meaning he should be fine moving forward. Jabari Parker is rostered in 90 percent of all leagues and has justified that number with consistent production over the month of March. He has scored in double-digits in nine straight games, shooting at least 50 percent from the field in eight of those.

The Nuggets sit just one game out of the number one seed in the Western Conference but are likely to find the going tough against a Celtics team looking to win at all costs. The Nuggets have won four of their past five games but three of those victories have come against inferior opposition. Isaiah Thomas is out of the rotation which has Monte Morris move back into a more sizeable role. That being said, he has struggled over the past two games but should still be viewed as a potential streaming option if you need assists.

The Celtics are still sitting in the fifth seed despite winning five of their past six games. They could be without both Al Horford and Gordon Hayward for Monday’s game which would certainly impact their ability to get the win. Horford appears more likely to play, however, Hayward is going to have to clear the concussion protocol. His absence doesn’t really have an impact in terms of fantasy as the value players are already rostered across most formats.

Both teams here are on the second night of a back-to-back, however, the Knicks are coming off a one-point victory over LeBron James and the Lakers. Damyean Dotson had another 20-point outing, his third such game in his last four. He played a whopping 41 minutes in the victory and has certainly avoided the rotational uncertainty surrounding many other players. His ownership is rising but he should still be around in over 50 percent of leagues. The Knicks have four games this upcoming week and Dotson should be rostered across most competitive leagues.

The Raptors could be without both Kyle Lowry and Kawhi Leonard for Monday’s game if history is anything to go by. Lowry has missed two straight games due to an ankle injury, and while it doesn’t sound too serious, extra caution will be taken. Leonard could simply sit out to manage his load on the second night of a back-to-back set. Serge Ibaka is also out as he serves his three-game suspension. A positive is the Fred VanVleet returned Sunday and had 17 points in 31 minutes. He is worth picking up given the uncertainty around both Lowry and Leonard.

The Heat are one of a number of teams playing the second night of a back-to-back set, however, they were certainly not stretched as they smacked the Hornets by 18 points. Dion Waiters had another double-digit scoring night, hitting four triples in 22 minutes. Waiters is not the flashiest streaming option but could be thrown in if you need three-pointers and a few assists.

Coming off back-to-back losses, the Thunder will need to win if they are to climb back into the top four in the West. Russell Westbrook will be suspended for Monday’s game after picking up his 16th technical foul in the loss to the Warriors. His omission should result in Dennis Schroder having a bigger night, although, he is typically rostered in most leagues anyway.

The Warriors could get Kevin Durant back for Monday’s game in San Antonio after missing two straight games with an ankle injury. It never appeared too serious and rest may have been a factor in him sitting out both last week’s games. DeMarcus Cousins, on the other hand, could miss Monday’s game. He is slated to undergo an MRI and while there is no real concern, given his history, they may elect to play it safe. Owners should keep an eye on the injury report leading up to the game, although, there are no clear pickups if he does sit out.

The Spurs are the hottest team in the league right now, having won eight consecutive games. Not only have they been winning, but they have beaten the likes of the Trail Blazers, the Bucks, the Nuggets, and the Thunder. Jakob Poeltl has been playing well over that period despite scoring in double-digits just twice. He has blocked five shots in each of his last two games and is typically efficient on low volume.

The Pelicans will be without Jrue Holiday once again Monday, and the fact he was ruled out over 24 hours prior is not a good sign. He could potentially be done for the season, although, there has been no definitive word as of yet. Frank Jackson continues to see big minutes and has scored at least 13 points in six straight games. He does nothing outside of scoring but with his current role set in stone, he is worth considering if you need points in a hurry.

Luka Doncic is clearly banged up but insists he wants to play as many games as he can down the stretch. Ultimately it is not his decision and the Mavericks could elect to give him more nights off moving forward. Whether he is active or not, Jalen Brunson continues to be one of the hottest pickups in fantasy right now. Chances are he has already been picked up if you are in a competitive league, but if he is still available, don’t hesitate in grabbing him.

The Bulls were thumped by the Kings on Sunday and got very little production from any of their stars. Zach LaVine led the team with just 18 points, while the rest of the starters combined for only 33 points. Performances like this are bound to happen for a team with very little depth but they should be better Monday against a Suns team in a similar situation.

The Suns could be without Tyler Johnson again Monday, meaning De’Anthony Melton could see another start. He played 29 minutes in their most recent game, ending with six points, eight rebounds, five assists, and three steals. If Johnson is ruled out, Melton could be worth a look as long as scoring is not a priority.

The Pacers continue to hang on to a top-four seed in the East but will need to keep winning if they hope to stay ahead of the Celtics. Their last three games have all been decided by five points or less and Monday’s game could be a similar scenario. From a fantasy perspective, the value is almost certainly rostered in your league with Wesley Matthews potentially available, but only if you need three-pointers.

The Trail Blazers themselves are battling to maintain a top-four seed in the Western Conference. They will be without C.J. McCollum who is going to miss at least a week of action with a knee injury. This certainly helps the Pacers chances but could result in Damian Lillard taking on more offensive responsibility. Rodney Hood could see an uptick in his usage and should be on the radar as a streaming option if you need points and threes.